Last night my wife and I went to go see Sucker Punch, a steampunk/dystopian movie about a bunch of girls trying to escape from an insane asylum.

It looked awesome from the previews. The overall idea of the film seemed pretty cool. It is a visually stunning experience, and the soundtrack is downright kickass.

Unfortunately, the movie is an absolute disaster. How on earth can anyone screw up steampunk Nazis*, cleavage, and Jon Hamm? 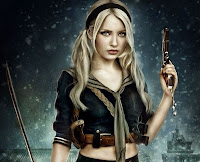 Don't let her do any PG-13 cockteasing on you. This movie is only dystopian in the sense that some day we will live in a society where people will still be paying thirteen clams a ticket to see movies like this.

I suppose at this point I should mention that there are spoilers ahead, but, quite frankly, it doesn't matter.

A quick rundown of the "plot," as it were. Baby Doll is thrown in a sham "mental institution" which ends up being a dumping ground for rich old men to dispose of inconvenient relatives. In this case, Baby Doll is framed by her stepfather for the murder of her sister, and he throws her in the nuthouse to cover it up; a planned lobotomy will cause her to be an unreliable witness to the crime.  It turns out the asylum is also a brothel, and the "insane" girls regularly practice dance routines to entice customers. With the help of four accomplices, Baby Doll forumaltes a plan to gather four items: a map of the asylum, fire to start a distraction, a key to unlock doors, and a knife to defend themselves. They have to accomplish this all under the suspicious eye of Blue, the owner of the brothel/asylum, and they also have to do it all before the "high roller" appears to ravish Baby Doll and make Blue a ton of money.

The movie is then re-framed to represent the fantasy elements of her plan. When she "dances," the individuals watching her are so enchanted that one of the other girls can procure the item. When the "dance" starts, we as viewers don't get to see it; the movie then shifts to a fantasy setting, where the goal in real life is abstracted into a fantasy sequence. For example, when trying to get the map, the girls are transported into a war zone with steam-powered zombie robots, much like an old war movie. They fight through the trenches to find a map, and when the finally reach their objective in the fantasy sequence, they have gotten it in real life as well. The fantasy sequences cover science fiction, dragons, big jetpack-fueled robots, and all the other stuff standardized in the steampunk genre.

And so the movie goes on--as they find each item, they run through another fantasy sequence. They often receive help from a mysterious old man, who prattles on with cliched platitudes and advises their objectives. Bad Things continue to occur until the last climatic escape, when various secrets are revealed. Or not.

First off, we might as well point out the good stuff. As I mentioned before, this movie is a visual feast. If you're a fan of the Sin City/300 style of cinematography, you'll love how this movie looks. It's very stylishly done and enjoyable to soak in. It's possible some people might find it too much--a few of the fantasy battle scenes were sensory overload for me. But it's a very beautiful movie.

The music is also solid. The scoring is appropriate, and many songs are rearranged (such as "Sweet Dreams" and "White Rabbit") in an incredibly impressive manner. From an overall sensory standpoint, this movie is pretty good.

But that's about it. When we get to the end of the movie, it's made reasonably clear that there is no brothel, no high roller or mayor, and pretty much everything we've just watched is either a lie or highly exaggerated. All of these challenges were simply a fantasy within a fantasy. These girls are in a real asylum, so they've fantasized about it being a brothel, and then fantasized these steampunk battles within that brothel, and then legitimately try to find the items in a fantasy within a fantasy. And towards the end of the movie we are brought right back to a point about ten minutes into the movie, when they complete a lobotomy on Baby Doll. They reveal that much of what the girls had done (such as stabbing Blue and burning down part of the building) were, in fact, true, in the meantime, but not in the context in how it was portrayed.

Perhaps had the movie come out earlier, this would have been better appreciated by me, but I doubt it. I guess I'm more or less tired of the whole "is it real or fantasy?" genre; scriptwriters were dragging this out way back in the day with movies like Total Recall, and it was kind of old even then. Since then, it seems like every other "suspense" movie is simply supposed to make us guess throughout the entire movie whether everything we see is true or imagined, with no logical tools to guide us. Some can pull it off--I haven't seen Inception, but I assume it was done well based on what I know--but unless it's a completely new twist on the concept, I'm over it. It just seems to be a poorly written and lazy way of basically saying "We can write whatever we want with no sense of logic or plausibility, because none of it actually happened!"

This movie, therefore, is a mess. Even though going in you know it's a fantasy, there is bascially no frame of reference for how anything works. Since the movie is revealed to be a brothel very early, we base all of the characters, motivations, and truths to be based on that. When it turns out that it all still happened but completely different than how we saw it, it only creates more plot holes and illogical aspects instead of answering them. Aside from a few points here and there--like the "mayor" really being the guard, or the fact that the doctor and the "high roller" are coming on the same day--there's basically three subpar movies crammed together in a beautiful mess of a total experience.

As an aside, the movie is also quite similar in some senses to Brazil--in fact, the doctor-giving-a-lobotomy scene is eerily similar. And it's the exact same concept--a character is about to undergo a procedure (albeit torture vs. lobotomy, but with the same end result), the movie shows something completely different happening, and at the end of the movie we realize that everything we've just seen was in the imagination of the person just about to go under and none of it even happened. The scene where it cuts back to the doctor is almost the exact same setting. I'm sure they'll call it a homage instead of plagiarism, but you can make the call.

I really, really wanted to be able to recommend this movie. But it's just a jumbled mess, and I can't.

*Granted, I realize that the setting for the steampunk Nazis was probably World War I and not II, what with all the iron crosses and trenches, but when you're fighting troops powered by steam and headed by zombies and fighting them with a big robot with machine guns for hands, I am assuming historical accuracy was not a high priority.
Posted by Crank Crank Revolution at 10:56 AM