A few weeks ago my wife and I visited a strange store called Baldinger's. They advertise it as a store with "Foods From All Nations," but they seem to specialize in candy. While browsing the store, I came across a lot of unusual things--at least to me--and then I came across something called Coconut Patties. This, I had to have. The company that makes them is called Anastasia Confections. 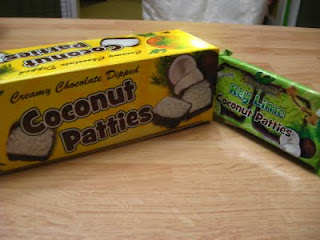 You and I both know somewhere in Hawaii is a stripper with the stage name of "Coconut Patty".
I am a huge fan of anything coconut, but I am much less a fan of things that simply have synthetic coconut flavoring added to it. Such of those things can be good, but I can certainly tell the difference. In addition, I actually like the texture of coconut, especially with chocolate, so this particular candy seemed to be the perfect combination.

When the box is opened, you'll find about twenty or so individually wrapped coconut slices (loafs?). It's basically compacted shredded coconut with one end dipped in chocolate. And they are very, very good. 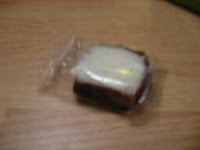 They are also oddly filling. Even though each individual slice isn't that big, the coconut is so condense that you feel like you're eating something much heavier. The taste--either the coconut or the chocolate--is not overpowering, and is not sickeningly sweet. For the record, it stays together well and doesn't crumble.

I was much less impressed with the Key Lime-flavored slices. 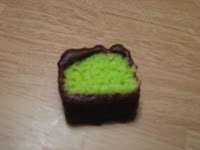 They weren't bad, but they were a little too sweet--and, also, it tastes like artificial lime flavoring. If you enjoy the taste of lime you might get more enjoyment out of these, but I didn't.

Apparently, there's also mango, orange, almond, and pina colada flavored patties, but I'm not a fan of any of those flavors, and they weren't available for me anyway. It's a fairly safe assumption that if you like the originals plus one of those flavors, they will be good.

The price wasn't horrible, but not great--I paid about five bucks and change for the big box. For a specialty item--and one that's of high quality like this one--it's worth it.