Blooming flowers. Songbirds in the air. Light afternoon showers. All of the wonderful portents of spring are varied and well-known, but few rival the growing menace of that ever-popular sign of the season: the diabolical Marshmallow Peep.

Let's get this straight: I hate these things. Peeps are disgusting, flavorless gobs of sugar and bile. Parents love them because they are bright and--more importantly--cheap. Children love them because quite frankly if you gave kids the choice between getting a million dollars a year for the rest of their lives or a permanent IV drip of high fructose corn syrup, they would take all of two seconds to wrap a band around their arm and tap their forearm expectantly.

The popularity of the Peeps have lead the manufacturer to create multiple colors and sizes of the things, such as lavender rabbits, orange pumpkins and--assuming this is the method used to be successful in the first place--pitch-black Cthulhus. But make no mistake, there is only one flavor of marshmallow Peep: diabetes. 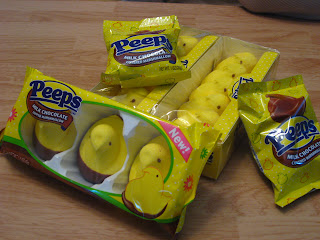 Pictured here is a toolkit for terrorism. And, yes, this joke is going to keep on going long after it gets old.
Even though the standard Peeps haven't changed, they've tried to branch out into other things. So let's take a look at each of the options available. 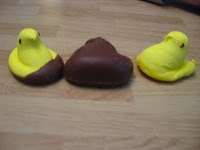 The standard Peep is pretty self-explanatory: a big gob of sugar and wax, molded into the shape of a chick. 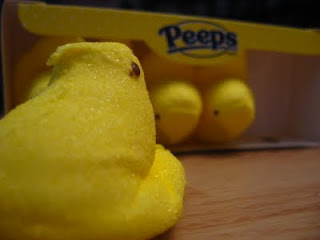 Just so y'all know, cute little chicks grow up to be big dirty chickens. Which more or less accurately describes the digestive itinerary of a Peep.
I think they're nasty. They are tasteless, they are too sweet, they have no redeeming nutritional qualities, and the consistency is kinda gross. 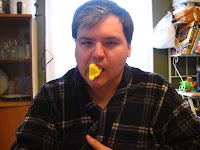 The Spanish-American War had "Remember the Maine." World War II had Rosie the Riveter. Here is me, the mascot of freedom for the new century, destroying awful gobs of sugar for liberty.
I hate them. Don't eat them.
The marketing gurus at the Peeps Laboratory apparently realized a segment of the population was just like me, so they decided to add something a little extra--why not dip the things in chocolate? Everyone loves chocolate! 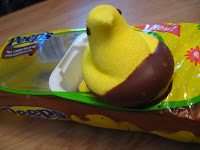 Look closely. This is the gaze of indigestion.
As you can see, though, the chocolate is kinda thin. The only way this thing is good is if you scrape off the chocolate on the bottom, melt it down into a bar-shaped form, stamp the word "Hershey" on it, and throw away the Peep, sealed in a closed container and shipped to the Yucca mountains.

Lastly is the chocolate covered Peep. This one is a little different; while it seems like this would be simply a Peep dipped wholly in chocolate, the inside is actually slightly different than a regular Peep. 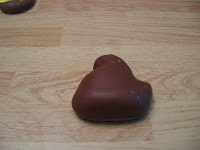 Your covert actions don't fool me. I know exactly who you are.
I don't know how to describe it, aside from "different, but the same level of disgusting." It's not really marshmallow or sugar as much as it is "Peep-like filler." It's all yellow, instead of the creepy white-and-yellow mix of the original. If I was forced at gunpoint to eat one, it would be this, because at least there is chocolate and the consistency isn't as disturbing as a regular Peep.
Listen, I'm fully aware that plenty of people love these things. Those people are called traitors. Don't buy them or eat them; that will only encourage them to create more.
Posted by Crank Crank Revolution at 12:00 PM