I've always been a lukewarm fan of taffy. To me, it's one of those confections that's hard to screw up but very difficult to make me crave it. And most people (at least around here) have their exposure to saltwater taffy limited to a box picked up in some seaside tourist trap, where three out of the ten different flavors are awesome and the rest taste like Elmer's Glue, and those stay and get rock-hard in the bottom of the candy jar only guests are supposed to eat from.

Anyway, I came across some taffy at a store and decided to give them a try. First, I picked up three flavors called Turkish Taffy--banana, chocolate, and strawberry--and one pack of strawberry French Taffy.

The Turkish taffy is Bonomo, which actually has a pretty interesting history. It's technically neither Turkish nor taffy. Sadly, they no longer appear to have a web site. The French Chew is from Doscher's. 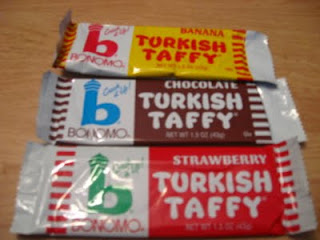 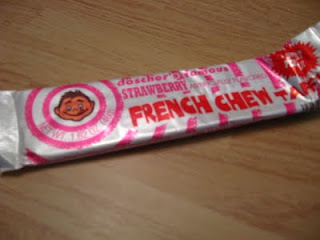 This is the best PR for French Chews since the resolution of the Dreyfus Affair.
The taffy was a little hard, so I had to break off a chunk. Once eaten, however, it softened up quickly. It's not very strong but is quite light, which is probably a good thing.

The Turkish taffy was more or the less the same, though it was soft right out of the package. Flavor-wise, the French and Turkish strawberry taffies were both the same. 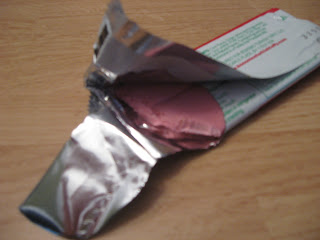 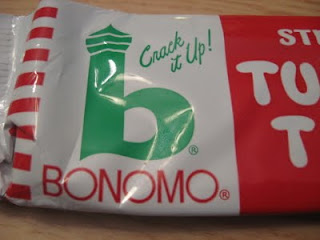 I can only assume, then,  that this was not related to taffy consistency but was some sort of coded message for Al-Queda.
The chocolate Turkish taffy was up next. Like most chocolate taffy, it was only nominally chocolate. That doesn't make it bad, but don't expect a Hershey bar. Likewise, the banana Turkish taffy was good, mostly because it's very difficult to pull off banana-flavored candy, and taffy is the perfect receptacle for doing so.

Of course, the fact that I had both chocolate taffy and banana taffy made me instantly realize that I could make my own chocolate-covered banana taffy. In a mere few seconds of inspiration, I made the culinary equivalent of the Manhattan project right in my dining room. 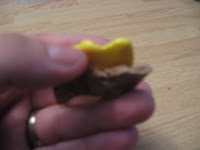 Kiss my ass, Paula Deen.
Bottom line: one can only ingest so much taffy. It's good, but unlike chicken wings or pasta, you can't make up in volume what it lacks in flavor. Thankfully, both nationalities of taffy were pretty good if not superb. There may be peace on earth yet.
Posted by Crank Crank Revolution at 6:00 PM