We're going to have a week of nothing but candy reviews. It's been a while since I've done these, so hopefully this will make up for it. You will be sick and curled up on the couch by Easter; I promise.

Anyway, while looking for something completely different--like, um, organic celery or gluten-free granola--I found out that they have come out with two additional flavors: Triple Dazzle Caramel and Fantabulous Fudge. 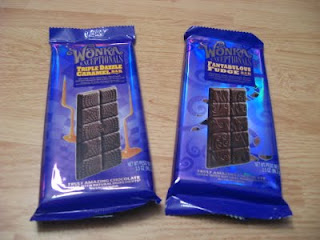 Amazingly, only one of those words in that last sentence failed the spellcheck.
I find the whole oddly-named candy to be kinda off-putting; I don't know why, since that's half the gimmick, and Old Willy was sort of a creeper anyway. Still, it would seem that the "Wonka" brand and the way that it is marketed would be geared towards children, and yet these candy bars are clearly premium-priced and placed far away on high shelves, nowhere near the eye-level of young kids in most checkout lanes.

The first bar I tried was the Triple Dazzle Caramel. Like the other candy bars, it's huge, on par with if not bigger than those "King" sized bars. 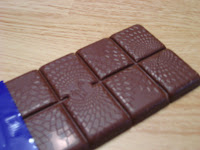 The other bar, the Fantabulous Fudge, is very similar: it's basically the standard milk chocolate with a rich layer of fudge in the middle. 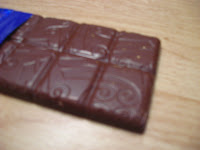 I liked this one a lot better, but it's also very similar in texture to the Domed Dark Chocolate bar. Obviously, this is fudge and not dark chocolate. They pulled off the fudge well. Many times, candy bars with fudge will be remarkably disappointing; I often find them stale and often dry and hard. Thankfully, the Wonka bar does it well.

Presumably, these two candy bars replace the Waterfall and Domed Dark Chocolate bar released last year. At least from a distribution standpoint, I see the two new bars plus the Scrumdiddlyumptious Bar together, and I never see the original two. (Though I have seen the Waterfall bite-sized candies, and I'm sure the others are available somewhere.)

Aside from the absurd names, they didn't get too creative this time around, which is kind of a shame. Fudge and caramel are pretty standard candy bar fillings. While that makes them easy sells, it also means they're not significantly different than what's already out there. Still, the quality is high, and it seems like they are working their way through all forms of chocolate (dark, white, milk, fudge, etc.) This can only lead to good things.

The bars themselves are probably too big to simply grab on the go, but beyond that they offer some quality flavors wrapped up in creepy marketing. 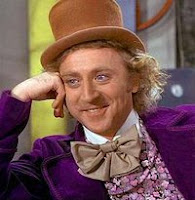 Nope. Nothing creepy about this AT ALL.
Posted by Crank Crank Revolution at 6:00 PM