My wife and I recently attempted to make gourmet popcorn. While we're still learning, so far it's been a pretty positive experience, with the extra added bonus of getting to eat a ton of awesomely flavored popcorn.

Gourmet popcorn is really just flavored popcorn. The trick is, though, that it can theoretically be pretty much anything you want--from dill to chive to astronaut ice cream to Purplesaurus Rex.* There are a few city-based shops that specialize in this sort of thing, but they're sold at a premium price, and in my mind it wouldn't hurt how to learn to make the stuff wholesale. And then proceed to eat wholesale amounts of it.

It took a little convincing, but my wife went along--which is good, because me + kitchen = disaster of UN Peackeeping Forces proportions--and so our first attempt was a simple one: white cheddar popcorn. It didn't help that we purchased and ate what I approximate to be about six score pallets of the stuff on the way back from Erie, the calories of which we burned off in a failed attempt to keep the dogs from eating it all instead, and were both craving more.

Given it was our first try, we went to the expert: the Internet. Pretty soon we** popped up some corn, and, according to the instructions, mixed in white cheddar seasoning with butter, then poured that over the popcorn. Except that it didn't exactly work. Pro Tip 1 From The Gourmet Experts: when you mix white cheddar seasoning with butter, it becomes Solid White Cheddar Chunks of a Non-Pourable Consistency. We didn't know any better at the time, so we did our best to mix up the cheddar clumps in with the popcorn. It actually turned out OK, but it was a bit uneven, and every once in a while you got a (surprise!) big salty chunk of flavor in your mouth which was not necessarily what culinary experts call a positive experience. 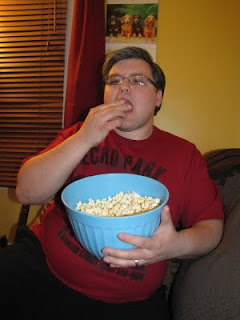 This is me "helping."
The second attempt went much better. We mixed buffalo ranch in with the popcorn, and it was just the right level of spiciness without being overwhelming. Luckily, we wised up and mixed the butter in the popcorn first and then added the seasoning afterwards, which worked wonders. 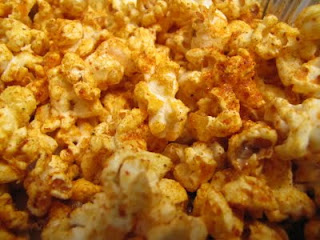 No bone plate necessary.
After two seasoned recipes, we tried our hand at something sweet. We decided to go with chocolate peanut butter, since every single person in the world up to and including serial killers and Scientologists loves chocolate peanut butter. We simply melted PB and chocolate chips, and then mixed it in with the popcorn. Oddly, this one did not work as well. The chocolate/peanut butter combination got a little chewy and dry,and while it wasn't bad, it clearly wasn't the right consistency.

After that small disappointment (well, we were so disappointed we ate all of it, anyway), we did Parmesan garlic, using regular shredded Parmesan and garlic powder. This also went over well, though the mixture may need to be tweaked a little.

For the latest recipe, we went sweet again: this time, we tried our hand at smores. We got some Golden Grahams, chocolate chunks, and baby marshmallows. Mixing it all together, and we got something that was truly delicious. The marshmallow helped everything stick together, and we got pretty much the right proportion of ingredients. There were a few logicistal problems--the chocolate chunks fell off often--but it was still very, very good, and the best part was that it kept for an entire week, still tasting pretty fresh. 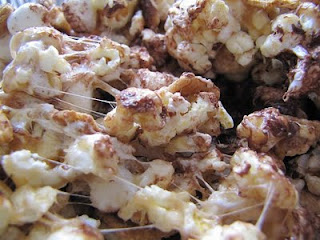 I want to eat this computer monitor RIGHT NOW.
I'm not sure what we're going to try next. We still have some tinkering to do--the seasoned flavors tend to get soggy after day two, and I'd like to try more sweet recipes before I declare victory--but I have approximately 1,000 different flavors I want to try. I will be glad to show all of you our results, of which you will not be able to taste. That is the benefit, and the bane, of the Internet.


*Unrelated: I just came up with four new flavors to try.
**I am using the word "we" in the sense that it means "my wife did it while I watched because the moment I touch a pan that isn't room temperature the entire kitchen will crumble into ash, dust, and broken rainbow dreams."
Posted by Crank Crank Revolution at 9:00 PM