A Love Letter to Erie, PA

About two weeks ago we traveled to Erie, Pennsylvania. We went for a few different reasons, many of which we couldn't do because it was snowing up there in April*, but it was my first experience with the city aside from driving through it on my way to Canada. 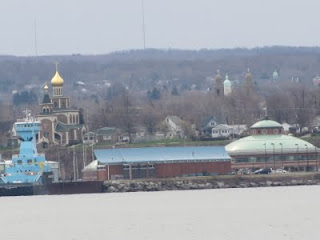 I was, as they say, impressed.

Now, first off--don't get me wrong. I know full well that we were only there a few days. I know that I missed large parts of the city. I'm sure there are dead and decaying areas that passed over my radar. I didn't check property taxes or the level of outright corruption in the local political scene. I know that winters there can be understandingly torturous and the job market is flat. I'm sure I wasn't there the three-quarters of the year when locusts or tsetse flies or hippies infest State Street or when the red tide rolls in. So I'm going to up front admit that this is more or less a first impression.

That said, we had a blast. The city looks nice and clean. There's a reasonable amount to do for visitors, the people are by and large very nice,and I didn't find the incidence of dissonance to be any better or worse than any other place I've visited.

Of course, part of this simply may be one of expectations. Just like the other nearby cities--such as Buffalo, Cleveland, and Pittsburgh--I assumed Erie was another burned-out industrial shell of a town trying to cope with changing times. And no doubt that's true. But it certainly didn't look like it. It seems like the plan in Erie is that when an old factory or an old building is no longer used, it actually gets torn down. Granted, they may just replace it with yet another memorial to Oliver Hazard Perry, but at least it's gone. Contrast this with Pittsburgh, where every abandoned warehouse, shuttered steel mill, or dirty manufactury shut down in the mid-70's is still there. There is a obstinate reluctance to tear anything down, either with the hope that someday it will magically re-open in some alternate economy or because someone assumed two Stanley Cups had been won there.

And I know most of the residence there would bemoan the lack of interesting things to do there. News flash: Everybody thinks this about where they live. Every city, regardless of how large, is going to run out of things for residents to do. So with that caveat, I could see how people feel limited, but I didn't see it as a problem.

Now I will grant this: Erie drivers are pretty bad. Drivers are bad everywhere, of course. Here in Pittsburgh drivers are obnoxious on many levels, but--with so many bridges and roads built for horses to drag steel I-beams around--there's an inordinate number of lane changes, awkward merge points, and outright illogical traffic patterns. Because of this, it's easy to excuse a lot of bad behavior. Not so with Erie. Erie is pretty straight-laced when it comes to city planning and roads, and there's no reason for the quality of the driving I witnessed there. They still drive like they do in Pittsburgh, just without any reason to do so.

Erie is not without its charms. They do what a lot of cities are doing and have a series of figures around the city--in Erie's case, frogs. I'm not sure what the significance of frogs are, but I love it when cities do that sort of thing. Frogs are kinda weak, though. Here in Pittsburgh we have T-Rexes, which, granted, also don't make a whole lot of sense, but at least they're freaking T-Rexes. They will eat you. Frogs will just annoy you on mild summer nights.

C'mon, guys, I learned this in like third grade.
I'm not saying Erie is perfect, but we had a lot of fun there, and we plan on returning soon.

*Not that I'm bitter.
Posted by Crank Crank Revolution at 3:32 PM