I don't like reviewing movies too much, mostly because my appreciation for movies is fairly shallow. Mostly, I don't know what I'm talking about, though that's not going to stop me from posting a top ten movies of all time list later this summer. (It is a perpetual work in progress.)

So my review for Judd Apatow's Bridesmaids should be taken in this context. 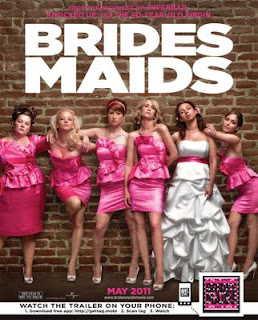 I am a lukewarm fan of Apatow's movies, or of the entire "bromance" genre of movies such as Knocked Up, Superbad, or The Hangover. I find them funny enough but with a certain level of shallowness to them; the catchphrases and scenarios always seem to ring hollow for me. (I'm sure the fact that I'm older makes a difference.) So when this was billed as a "female Hangover" I wasn't sure what to think.

The first thing that sold me was the fact that Kirstin Wiig was in it. I find her to be extraordinarily talented, even more so since she's the isolated talent in that dry cesspool of hack talent known as Saturday Night Live. (I'm not a fan.) I also love Ellie Kemper (from The Office) and, while I don't watch her show, I find Melissa McCarthy (Mike & Molly) to be enjoyable enough. So the ensemble cast looked very promising.

The trailer also did a pretty good job of hooking me. Most movie trailers you can more or less extrapolate what all the jokes are going to be. While that's still a little true in this case, there's a lot of humor that is mined from all of the scenes they show. And--in retrospect--this movie was so full of jokes that the trailer includes (I would say) about 30% content that is not in the actual movie itself--a stunning reversal from those trailers were you end up pretty much seeing all of the good stuff.

Anyway, I won't go too far into the plot of the movie itself, since you can find that anywhere. Maya Rudolf asks Wiig to be her maid of honor, who then strikes up a catty rivalry with the rich, good looking wife of the groom's boss. While everyone else is enjoying the ride--no doubt fueled by the massive amount of resources at their disposal--Wiig's life slowly falls apart, and the disparity causes tension amongst the party. This plot strings along a disastrous trip to Las Vegas, a high-end bridal shop, Wiig's job and home life, some cute subplots involving a flirtatious cop and an overly caddish John Hamm, and Wiig's failure at business, romance, and acceptance of the few positive things in her life.

Of course, peppered in all of this is plenty of grossness and profanity, most of it to effective results--enough to make it funny, not too much to make it unnecessarily gratuitous. (In one particularly awful scene that involves the bridal dress, nothing is shown, which makes it all the funnier.) The balance of crassness versus sanity hits almost perfectly throughout the movie, and the results are hilarious.

Of course, the movie isn't perfect, but it's pretty close. There's about a half hour where Wiig's life just crumbles, and there's nary a laugh to be found. Now, this part of the movie is largely necessary, not only for the plot, but to frame the rest of the movie around it; by dragging everyone down in its own level of melancholy, it enhances the humor of the rest of the movie. Still, one wonders if that sad segment couldn't have been a bit tighter, since many of the scenes could easily have lent itself to humor other parts of the film and still had the same effect. Also--a minor detail--one plot, Wiig's relationship with the cop, ends up fairly predictable, and as such probably the time spent on it could have been 1) funnier, or 2) shorter.

And, of course, there's the same trope being drug out and beat--the movie is misogynistic, an excuse to show how all women are jealous harpies only interested in spending money and emotional manipulation--having potty mouths and gossiping about sex only makes them shallow and incapable of seriousness. Not to be condescending, but--really? These are people who believe that the only way in which women can't be portrayed as serious is if they are in yet another cookie-cutter romantic comedy, and I'm firmly convinced it's the modern rom-com that's set women back decades in cultural parity.

In any case, Bridesmaids isn't for everyone. It's often crass and the storyline isn't ironclad, but it's also filled with a lot of genuine humor and plenty of subplots that are legitimately emotionally valid. And don't be fooled: This movie doesn't fall in the "chick flick" category or the "female bromance" category, but some sweet spot in between. It's one of the funniest movies I've seen in a long time. I recommend it.
Posted by Crank Crank Revolution at 9:53 PM