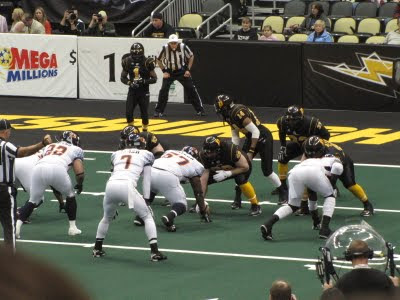 This weekend, my wife and I went to see the Pittsburgh Power, our local Arena Football franchise.

What, exactly, is arena football? Good question--not too many people know. 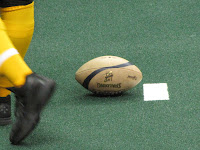 I will try to be more specific than this.
Arena football has been around for over twenty years. It was developed in the mid-80's by an ex-NFL executive named James Foster. The Arena Football League operated for about two decades before finances caught up with most franchises, and had to fold for a season. This year, the league was re-booted, from which Pittsburgh was awarded a team.

Arena football plays very much like regular gridiron football, with a few notable exceptions. It's indoor, which means that the field is only 50 yards. There is no punting permitted so players always go on fourth down. And while there are no uprights, there are huge nettings in its place. Since field goals are almost always played within 10 yards or so, the FG range between the netting is quite narrow.  The roster and formations have much fewer individuals, so "ironman" players who play both offense and defense are common. And, oddly for gridiron fans, one offensive player may be rushing forward (but not past the line of scrimmage) at the time of the snap.

Rules-wise, those are the major changes. Of course, with only 50 yards to play around in, it changes strategy immensely. Rushing the ball is much less common. Long bombs and high passes are common, and scoring is much, much higher--no 7-3 grindfest games in the AFL. Games commonly end up in the 40 to 80 point range.

So while you're most definitely watching a football game--the formations are similar and the roles everyone plays will look familiar--it's a much different game. Everything is compacted together, which means faster players and athleticism play in place of huge, bulky tanks of men slamming against each other. (Although there's still some of that--don't get me wrong.) It seems a much less violent game, mostly because there's not a whole lot of room for huge collisions, and there's not enough roster space to waste on guys whose job it is to pound people into the floor. Not that there aren't any injuries--there were quite a few, including a poor ref, in the game we watched. And--unlike the other major Pittsburgh sports teams--the Power have a cheerleading squad, the Sparks.

The experience we had at the Power game confirmed most of this. Games are held at the Consol Energy Center, where the Pittsburgh Penguins play, so it's a new arena and very nice--and also very large, much larger than most other Arena franchises. 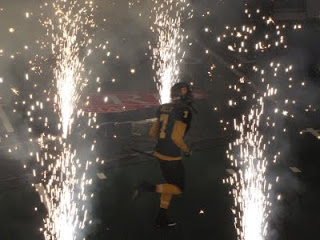 They sure know how to make an...electrifying...entrance.
Last weekend's game pitted the Power against the Spokane Shock, the kind-of defending champions; the bankruptcy and season suspension and ownership of the minor league franchises causing a lot of dissonance. It started off with a bang--appropriately enough, with the Power and the Shock playing--with Spokane scoring a touchdown on the first play, but then missing the field goal. The Power then struck back on the next series to score a touchdown. 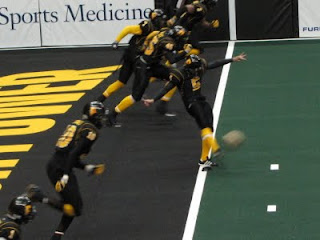 I promise, that is the last electricity-related pun I make, which is a promise no sports writer will ever make.
And so it went. It more or less seesawed back and forth, always within a touchdown or so for each side. Then Spokane pulled ahead by about two touchdowns, but Pittsburgh pulled through and, in the last minute of play, tied the game. Finally, with one impressive 40-yard touchdown pass, the Power take the lead; and four successful defensive stands later, the game is over. The Power's record rises to 4-4, not bad for a franchise that hasn't even existed for a year (and, dare I say, a record equal to the Pittsburgh Pirates.) 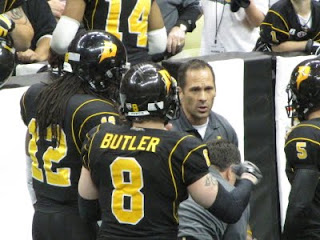 After a congratulatory celebration, the coach took everyone out for ice cream. At Diesel.
So, how was the experience? It was quite fun, and I'll encourage anyone to go--but it will seem significantly different for anyone who watches the Steelers or the Penguins, which is what I am sure most people who comes to these games do. While it's football, it's not quite the level of football fans are used to. There is a certain high-school game feel to it; none of the players are stars, and there aren't any heated rivalries or personalities to follow. This can be fun, of course, since there's a few local kids on the squad. And fans obviously want their team to win, but the sport is still too young and unknown for there to be much of an emotional tie to the game. 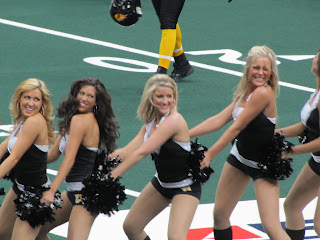 Although you never know.
It will also seem strange to not see a full arena. Attendance figures have hovered around the 9000 mark, although this last weekend's game was competing with SkyBlast at PNC Park, so it was down to about 6000. At first glance, people may wonder if the franchise will continue with a half-empty arena. However, keep in mind that Consol is a huge place for arena football--nearly all other franchises have much, much smaller facilities. Spokane's, for example, holds 10,000 people; Pittsburgh could nearly sell this out on a regular basis. Pittsburgh's fan base is very encouraging.

Of course, that's not to say there aren't some sketchy economics going on here. It's a young sport with a young team, so I'm sure it (along with most other teams) will operate in the red for a while. And there's a certain level of that minor-league feel to it, with strange endorsements, over-enthusiastic announcements, slightly desperate gimmicks, and constant shilling (although let's face it--this doesn't differ form the major league sports, either). Thankfully, the staff at Consol is an experienced outfit, and despite some of the modest ballyhoo the whole enterprise is very professional. Tickets are plentiful and prices are still pretty low, and you don't have to wait an hour before you can leave.

Bottom line, though, is that you should go see the Power. It's a fun time. If you're a football purist you may not care for it, but at least there's a few decades of tradition behind it. (Also, keep reminding yourself that Kurt Warner got his start in the AFL.) But if you're looking for a fun time with an interesting new sport, it's definitely worth the price of admission.

And the Arena Football League has one other good thing going on for it--they will actually be playing next year, unlike some other football leagues. Assuming all the checks clear, of course.


All photographs courtesy of Tiffany Harkleroad.
Posted by Crank Crank Revolution at 10:03 PM