Welcome To Winnipeg. What's Your Name?

It was reported last week that the NHL franchise in Atlanta--um, the Thrashers, according to most sources on condition of anonymity--will be moving to Winnipeg. Winnipeg was the home of a heralded former team, the Jets, so there is a devoted fan base and probably houses more than two thousand people, which is more than you can say for the Quebec City Nordiques. Or hockey fans in Atlanta, of which there are none.*

Chances are that the team will revert to the old Winnipeg Jets moniker, though that is hardly set in stone. Atlanta's former team, the Flames, vacated decades ago and went to Calgary, which is infamous for not being burned down by General Sherman and yet chose to retain the nickname.  Whether the new owners will revert to the Jets, retain the Thrashers, or come up with something new remains to be seen. (The thrasher, for those who were wondering, is the state bird of Georgia, and not a reference to Dominique Strauss-Kahn's rather singular method of foreplay.)

So if for some reason the owners decide to rename the team, I thought it would be instructive to see what the most common themes were in professional sports franchises.

I've collected all 122 team names from the major sports in America** and sorted them by category. Some team names were duplicated and counted twice (Kings, Giants, Cardinals, etc.) and some were quite difficult to classify, so a bit of research, creativity, and judgement was made.*** Here are the results: 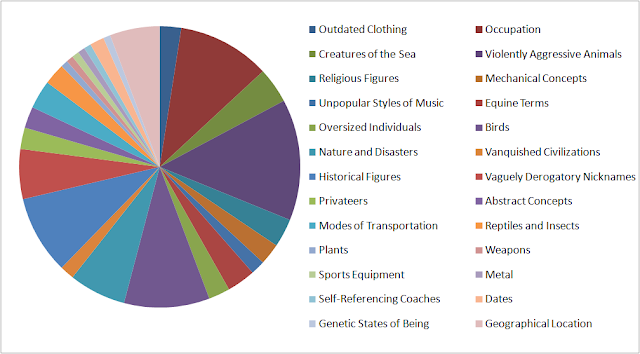 The most common theme, by far, are Violently Aggressive Animals, with a total of 17. Next up are Occupations, with 13, and Birds, with 12. Historical Figures come next with 11, Nature and Disasters with 8, and a tie with Vaguely Derogatory Nicknames and Geographical Locations with 7 each.

So what should Winnipeg go with? To go with the trend, they should pick a violent animal. Unfortunately, the animal that's killed the most people is the mosquito, and that's a highly disappointing thing to fear on the ice. (Also, the "Skeeters." Ick.) Is Eric Boulton going to go out there and say "Dude, I'm gonna come at you like a mosquito! I will suck out your blood and get malaria all up in your ass!"**** Other deadly and more menacing animals that show up on the World's Deadliest lists--such as dogs and hippos--are also unsuitable for mascot material. So it seems that all the good ones are taken.

Maybe we'll go in the other direction. The categories with fewest on this list, such as Plants or Metals or Weapons, have promise. Perhaps the Winnipeg Stalks of Wheat? The Uraniums? The Howitzers? This actually might be easier if I knew anything about the culture of Manitoba.***** Or how about one that hasn't been touched? Like The Single-Payer Systems? The Blackberries?****** How about the Winnipeg Vampires? Or is that still to close to the Skeeters?

Perhaps it will be the Jets after all. J-E-T-S Jets!

*And yet they will watch people drive in circles for hours every afternoon for like eight months. They lost the war for a reason, I think.
**I did not include Major League Soccer, because it would be too hard to classify such team names as the Columbus Staving Off Bankruptcies and the Spokane Barely Able To Fill A High School Gymnasiums.
***i.e., I made shit up.
****Actually, this is a remarkably plausible statement.
*****Sadly, this would probably not change my answers.
******Ha ha, Jim Balsillie. You done got screwed.
Posted by Crank Crank Revolution at 9:35 PM