Editor's Note: This is a new blog experiment (blogsperiment?) where various people have sent me random words, and I will try and write a halfway coherent blog about it each day this week. Today's word is: Sassafras.

I'll be honest: I'm not sure I know what sassafras is. 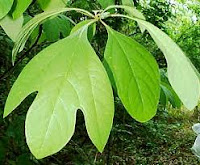 This, dumbass.
I mean, I have a vague recollection of what it was from like a billion biology class projects ago. Maybe in ninth grade I could have picked it out of a lineup and maybe even mentioned some obscure fact about it for extra credit, but I can barely remember what exit to take for work let alone the contents of my high school textbooks.

Sassafras is one of those words that I routinely confuse with other words. In this case, I confuse it with succotash and sarsaparilla. To be fair, sassafras and sarsaparilla are related in the greatest soft drink ever cooked up. I was also under the impression that succotash was, in fact, also a leafy green plant, linking the three into the world's worst Tribond answer, but it turns out that succotash is an incredibly unappetizing-looking blend of beans, corn, and shame. I am also under the impression that it suffers much more than one would normally think.

I'm sure there's some long-lost psychological* test with two hyphenated last names that would tell me why I confuse three vaguely-similar-sounding and similar-concept words together. Presumably this test would be a result other than "being slightly dim" which I could then whip out and use as sort of a get-out-of-jail-free card to weasel out of saying stupid shit. I have this disorder, you see, and it's most certainly not me paying just enough attention to slightly understand the words associated with concepts but not enough to actually comprehend and/or memorize said word.

like the time I told my wife that I had never tried haggis when I actually thought that haggis was hummus--and possibly the other way around--my only saving grace being that I had at the time never tried either and was quite happy with that particular aspect of my life. (I have since tried hummus and to me it tastes like pasted sheep lung.)

Although I swear these aren't all food-related, the next thing I get very confused over is the difference between samosas, Samoas, Samoans, and mimosas. OK, I don't actually confuse coconut-caramel cookies with strong safeties in the NFL, but I'm pretty sure the least embarrassing thing I have ever done in an Indian restaurant is order a Samoa. (Pro tip: If you don't know all the words to "God Save The Queen," it is not advisable to get assistance from the waitstaff at your local Taste of Delhi.) I also had to look up what a mimosa is, given my only reference was that one episode of Six Feet Under. 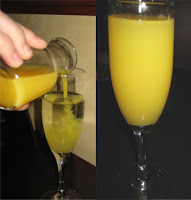 This seems like the exact sort of thing you would what if you enjoy the taste of vomit and Florida at seven the following morning.
Anyway, back to sassafras. I thought it was perhaps some sort of livestock feed or medieval food staple, but then it turns out I was confusing sassafras with yet another quasi-culinary concept, sorghum. And I always thought sorghum was one of those rarely-seen herbs used to make candy before the invention of cake, or taste, and I realized that I was confusing sorghum with horehound. Which, growing up, I always thought was "horsehound" candy, which in my defense sort of makes sense because horses have hides and also horses eat sorghum. I assume.

Clearly, this is something you want your candy to taste like.
Anyway, so I looked up sassafras and it turns out it was used to treat syphilis. And then the government banned it because it caused cancer. Still, better than hummus haggis.

*The spell check listed this as "alcoholically," which is also surprisingly accurate.
Posted by Crank Crank Revolution at 10:42 PM