I watched the classic film Treasure of the Sierra Madre this afternoon. Aside from starring Humphrey Bogart and being the source of the now-iconic and often-mangled quote ("Badges? We ain't got no badges..."), I knew a lot less about this film than I thought. My original plan was to live-blog while watching the movie (remember live blogging? Which was Twitter before twitter existed?) but I just couldn't quite both pay attention and do it proper justice. (Plus I had to spend every thirty seconds on Wikipedia looking up to confirm whether That One Actor was in That One Film I Can't Remember the Name Of. Answer: No. And I also didn't want to clog up my twitter feed to boot.) 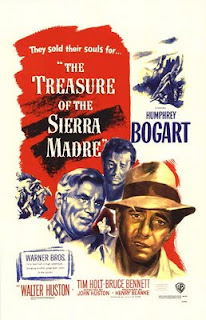 I am a sucker for treasure-hunter stories, though I tend to prefer books over the film. (Most treasure hunting stories are made in the journey, and most movies just want to get to the exciting part where treasures of glistening gold are found in remarkably well-preserved chambers. Books take their time getting to the goods.) Still, good ones that aren't horrid action films disguised as treasure films are fairly rare, so I grab onto them when I can.