Well, summer is over, but that doesn't mean that the hot summer treats have to end!*

One of those summer treats are those old sugar-with-artificial-flavoring ice sticks. They were called various names and were usually manufactured by low-rent food distributors looking to unload untold gallons of blue-colored corn syrup injected with synthetic blueberry flavoring. Kids loved them because they were more or less nothing but pure sugar and it made their tongues bright neon colors that probably ended up giving them nerve damage later in life. And let's not forget the arcane packaging, where you had to find a pair of scissors to snip off the end of it or--if you are a human being of any sort--you just chew off the jagged plastic end of it with your teeth, cutting up the tip of your tongue which can then be soothed by frozen cherry syrup and red dye #2. And, of course, not to forget the last, manhood-forming ritual of sucking on the package and slurping up the syrup that has melted and collected in the bottom of the package, thick and sweet enough to make Hi-C taste like Evian.

Of course, none of this matters. They are incredibly cheap--usually pennies apiece--and they are cool and tasty, so why not?

What we are going to review today are some of the newer flavors to come out, and these are flavors that appeal to the young and old alike: 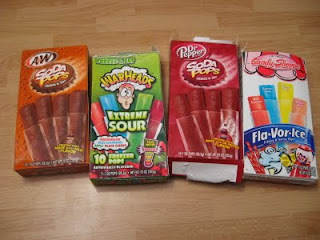 Here we have A&W Root Beer, Warheads, Dr. Pepper, and Candy Shop. All are manufactured by the Jel Sert company.

We can lump A&W and Dr. Pepper together. They both taste exactly as you would expect--root beer, and whatever the hell it is that is in Dr. Pepper.** They are very good and not too strong. However, the main problem is the nature of the product--these things aren't carbonated, obviously, so it basically tastes like you are drinking a frozen, flat version of a can of soda.*** It's not that bad, of course, since the sweeteners prop it up a bit. They're good, but don't expect the same refreshment of chugging a six-pack.

The Warheads are very...strange. If you aren't aware, Warheads are these obnoxious little candies that are lip-puckering sour. These are no exception. The initial taste wears off quickly, though, and the remainder remains fairly tart. I enjoy this the most, although those who don't like sourness are advice to stay clear. While they come in different colors and (presumably) different flavors, they actually just come in one flavor: taste-bud-destroying sour. 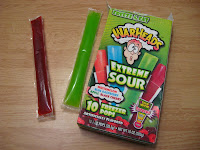 And to think, Reagan wanted to rid the world of these. Useful idiot, indeed.
The last one, the Candy Shop, includes red licorice, cotton candy, banana taffy, and bubble gum. I didn't get to try the bubble gum, but the other ones were pretty good--they taste exactly as you would expect. Banana taffy just tastes like banana and the red licorice is a little weak, and they're all just a touch too sweet. But I guess for a branding called "Candy Shop" you can't expect too much different.

The verdict? None of these are too strong, and all are refreshing. They're also reasonably priced, though when you can get a crate of the regular kind for less than a dime you have to look at it in the absolute.  While I'm not sure I would stock up and run through them, I can see them as an occasional refreshment on those hot days--or, hell, during the next ice storm.


*Oh, don't look at me like that. You eat ice cream during blizzards, the same as everyone else.
**My guess: prunes, ginger, and the souls of abandoned sea monkeys.
***Or, as normal people say, pop.
Posted by Crank Crank Revolution at 9:00 AM