Concert Review: They Might Be Giants and Jonathan Coulton

On Wednesday, my wife and I went to go see They Might Be Giants, with opening act Jonathan Coulton. 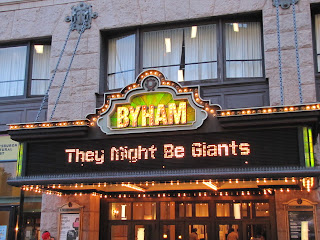 I'll be honest: I was more excited to see Coulton than They Might Be Giants. Not that I don't like the two Johns, but 1) I have already seen them several times in concert, and 2) I knew they'd probably be playing a lot of stuff from their just-released album, Join Us, a project I didn't particularly care for. And I had yet to see Coulton live. But TMBG always put on a good show, so I was looking forward to the show.

We get to the Byham Theater in the Cultural District of Pittsburgh--and spending perhaps four minutes of our allotted 45 minute allowance to find parking--and the first thing I notice is the rather diverse crowd. There are plenty of people my age, but also quite a few younger college kids wearing ironic T-shirts and a surprising number of older people as well. The theater itself, which I had never been to, was also quite nice--but more on that in a minute.

The usual marketplace was there, where we somehow managed to score a copy of Jonathan Coulton's Smoking Monkey for a sweet ten bucks, and then was informed his other album, Where Tradition Meets Tomorrow is out of print and normally goes for fifty bucks on eBay. So much for that. Rather embarrassingly, I pretty much had everything on the TMBG table already.

The show started, and Jonathan Coulton came on stage. He also has a new album out (Artificial Heart) but played a good, solid mix between his old music and new. He kicked off the show with "Skullcrusher Mountain" and played "Still Alive," "I Feel Fantastic," and "Good Morning Tuscon." Alas, he only played for a half hour, but was funny, performed excellently, and  definitely made some new converts; the audience members around me, clearly hearing him for the first time, were laughing. 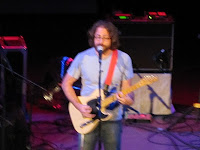 After his set, They Might Be Giants came out. As expected, they played stuff from their new album, but also a mix of the crowd-pleasing classics such as "Birdhouse in your Soul" and "Particle Man." Unfortunately, the Byham Theater is not built for live music such as this, and the acoustics were pretty bad. After an hour of play the band seemed to adjust and the second half of the concert went better, but it was disappointing that the sound was so off. 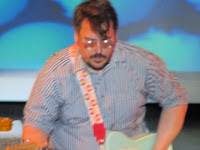 Here is John Flansburg sporting a creepy mustache. He was offering free copies of Mink Car from a van after the show. 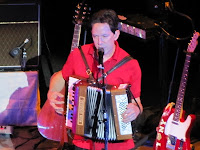 John Linnell in his element.
But John and John had a blast. They had clever banter between songs, did a hilarious little puppet show in the middle of everything, and talked about the vaunted Mr. Smalls, the previous oxygen-deprived venue they played in.

It certainly was a good time. The crowd had fun, the set list was just about perfect (they didn't play any of the few songs I hate, which other people seem to love) and aside from the acoustics problem was a grand show. I'm not sure if I'll go back--I've seen TMBG enough that if I miss a show I don't think it will be a huge deal. But I definitely will be seeing Coulton the next time he tours. I'd like to see a full show of his.
Posted by Crank Crank Revolution at 6:06 AM