Deuces Wild! My Wife And I Start A Gang

Driving across the Mothman Bridge* today in my hometown, my wife pointed out that some local hoodlums had spray-painted a message.

"What does that mean?" I asked.

And so brought forth some wild assumptions. We were discarding the obvious, since people rarely play poker under bridges, and those that do are probably playing for a tin of beans and do not have the time or resources to go about slathering cryptic messages about in battleship gray on overpasses. It seems like it could be some form of graffiti tag or something, but that doesn't seem particularly symbolic enough for the spray-paint-can artists of the world, unless "Deuces Wild" secretly means "feed the homeless" or "amnesty on art school debt". It's possible it could be some sort of degrading act defined in the Urban Dictionary, a thought we did not relish the thought of investigating, but once we did, it turns out that it is certainly not something one would normally want to advertising by writing on public works projects for the entire world to see.** So it couldn't be that.

That left only one realistic option: a gang.

Granted, my hometown isn't exactly a hotbed of violent gang activity. The last time a gang was spotted around these parts was when generic peaches were on sale at the dollar store on Social Security check day. So I can only assume this was a gang-in-transit across the county, perhaps on their way to seek out a turkey dinner at the VFW or clay pigeon shooting at the rifle range. Having not adopted residence nor registering with the local authorities, the only logical thing to do is for my wife and I to adopt "Deuces Wild" as our own gang.

Of course, this presents many problems. First, my wife and I have very little idea what exactly it is that a gang does. Hopefully it involves mostly watching Big Love on Netflix, because that would require only a minimal change in our daily routine.  So there may be some logistics to figure out, but that's what accountants are for, really.

Second, at first I thought "Deuces Wild" was pretty bad-ass of a name, but the more I think about it the less impressed I am. First off, while at one point in time poker was a pretty hard-core activity to engage in, all those stupid Texas Hold'em tournaments on TV have more or less legitimized the thing. Instead of swilling whiskey or bathtub gin and settling disputes with six-shooters or tommy guns, it now mostly involves the contractual obligations of promoting www.onlineoffshorepokermadness.com on your personal blog while simultaneously selling off-brand energy shots. These days, playing poker is about as intimidating as buying the upscale lunchmeat at the deli. Plus, there is no particularly menacing meaning about the number number two, unless it is the number of caps that is about to be shot into your ass.***

About the only good thing going for us is the word "Wild," which is still particularly bad-ass. Anyone described as "wild" is either about to chop you in half with an ax or about to take their shirt off for a free T-shirt, either of which will get you blackballed from the Rotary Club.

Anyway, I figured the best thing to do would be to mock up a logo for our gang for use with our online T-Shirt shop and, optionally, tattoos across our backs.**** I tried to think of everything that is kickass about gangs, so I settled on motorcycles, firearms, skulls, and fire. Not bad, eh? 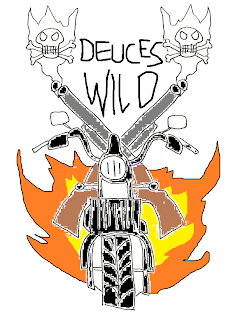 Can't Segways be badass too? That would make my life easier.
Now, I could have taken the cheap way and spelled it "Deucez Wyld," but 1) that would compromise my artistic and creative instincts in the establishment of our gang, and 2) I am not eight years old.

I also could have added a playing card, but I thought that it would be best to de-emphasize the "card-playing" aspect and increase the "shotgun and skulls" aspect of it. Also, I forgot.

We also cooked up a "gang gesture" so that any two members of our gang will be able to identify each other--and, conversely, to "mark" our "territory" against rival gangs. (This is our Dollar Tree, bitch!) I won't reveal the exact nature of our gesture, but let's just say it involves crossing our forearms in front of our faces and holding up two fingers on each hand. Shit! Forget you read that.

We still have a lot of work to do. We need to get the dogs on board, and neither of them seem impressed. I am also debating whether we need to get leather jackets or just stick with jeans jackets; either one is going to be caked with the massive amounts of blood that is sure to be spilled. You know, once we start our exciting new online T-Shirt sale extravaganza. Now, that's gangsta.

*Not its real name
**Don't. Just...don't.
***Please research and verify. --ed.
*****Approval from and participation of wife pending.
Posted by Crank Crank Revolution at 3:03 PM