0. If you haven't yet, you should pop over to the Crazy Scary fundraiser at the ScareHouse in Pittsburgh. It's fun, cheap, and for a good cause. My wife and I went last year and we're glad we did, so by default that means that you should, too. Seriously.

1. Pumpkin Pie Pop Tarts are back! Yay! As you can see in my review here and the awesome aftermath here, it appears that they are going to make this a normal, seasonal thing. This is probably for the best; I ended up having to throw away many of the boxes I picked up simply because, apparently, you can only eat so many Pop Tarts.

2. POP QUIZ: The world would be a better place with:
1) More gourmet candy apples
2) Less people who use the phrase "first world problems"
3) Another P.J. O'Rourke book
4) A proper sitcom vehicle for Felicia Day
5) ALL OF THE ABOVE, YOU SON OF A BITCH

3. Some guy has managed to make a side living with his web site, I Want To Draw A Cat For You. Apparently there is a market for absurdly-drawn cartoons. (No, seriously, this guy had gotten over a thousand people to pay him ten bucks to draw pictures of cats.) As the popularity* of my Shark Week posts displayed, I am well-suited to capitalize on this endeavor. Why am I not making money in this manner? Feel free to contact me for a ridiculously-derived yet generous quote.

4. This was my mid-morning snack the other day at work: 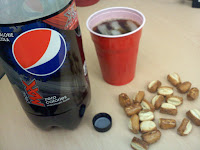 Don't judge me. It's healthier than a Mexican Breakfast.

5. This article at New York Magazine makes me believe that I could take a huge, steaming shit on a piece of paper and be considered a legitimate journalist. Why am I not getting paid to write, again?

6. One of my dogs, Chloe, has decided that she will not eat her dinner unless I sing an original composition I created one idle evening called "Dog Food for Dinner." The lyrics are as such:

I expect my Tony in the mail any day now.

7. There have been quite a few news stories about how the population is going to hit 10 billion and all . Has any of these reporters even heard of the name Malthus? So help me, I think magazines and newspapers have a department called "I can't believe we're still in business, so go ahead and write whatever the hell you want. We'll print your term paper, for crying out loud, just don't let 'em shut us down."

8. I have yet to find a new fall TV series that has captured my attention. I have had some people recommend some shows, but I haven't taken the bait yet. (2 Broke Girls just seems bad, but more than one person has given the OK, so we'll see And The New Girl was enjoyable but I'm not sure if it's sustainable.) Any advice?

9. It is getting close to the midpoint of the NFL season, at which point I normally look around and see what is going on. Quite frankly--even though most seasons turn on one or two games, since there are only 16--seeing a team that is 2-2 vs. a team that is 3-1 means practically nothing. But at the halfway point, you can at least get a sense of who are playoff-bound, who suck, and you can pluck out a lucky few that are at the make-or-break point in their season. I am fascinated by how the NFL sets up their divisions, and it's only a few rungs lower on my Scale of Creepy Things I Obsess Over than the electoral college. Speaking of, it's possible I will have bested my record of most wins in a Fantasy Football League season ever (4!) as long as the Jets don't completely pimp out their passing game tonight.

10. Speaking of sports, MLB is playing its World Series, and I still couldn't give two shits.

*And by popularity, I mean the exact opposite of that.
Posted by Crank Crank Revolution at 10:56 PM