Andy Rooney died today at the age of 92. 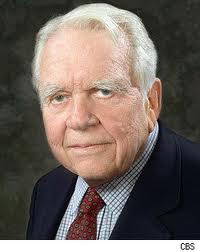 Do you know what sucks about dying? They won't let you use your frequent flyer miles. That's how they get you.
I've always been a lukewarm fan of Andy Rooney. I appreciate the fact that, while not a comedian by any stretch, he still managed to make everyday bothersome problems and inflate them into easily digestible four-minute monologues. They weren't hilarious, but they often managed to come across with that odd mix of gentle platitudes with a dash of snark. And to complain about child-proof aspirin bottles one week and abortion the next takes a certain level of skill that must be appreciated.
Of course, that said, I was hardly his target audience, and often his segments were simply the design of someone getting older and harboring a deep mistrust of change. Complaining about the passing of the rotary phone or reminiscing about the good old days before airline deregulation has its place, but he often held that level of misplaced nostalgia normally reserved for your narrow-minded uncle at the last wedding you attended.
And Rooney's politics were decidedly milquetoast: he spent his segments and columns trying to not offend anyone while also getting his own point across, and they often ended up a muddled mess. The few times he did get in political hot water, they were usually fairly mild and the only reason it was notable was due to the particularly deeply-held beliefs of his audience--recalcitrant senior citizens, who rarely take criticism of their own philosophies.
And, of course, he was old. He was old when I was a kid, long past the time in which both of our cultural landscapes would overlap. Perhaps another time and another place it would have made more sense to me, but ruminating on the important legacy of the Sears Catalog is probably lost on those of my age.
Still, you have to have respect for the guy. He trucked along right up until the end, only retiring a few short months ago. And if nothing else, he did well to create a snapshot of the American cultural landscape every single week as it faded away to make room for new ideas and personalities, much like we will now with his passing.
Andy Rooney was one of the original cranks, and so we salute him.
Posted by Crank Crank Revolution at 9:05 AM