It's the holiday season, which means an entirely new crop of Christmas-themed candy is now on the shelves!

Of course, that means a lot of other things are on the shelf, including things that should not be classified as food.

Yes, given the fact that I don't care for the Peeps brand of candy, these appear to be different enough that I thought it prudent to at least give them a try. 'Tis the season and all that nonsense, so let's take a look at an entirely new line of Peeps-related confections. 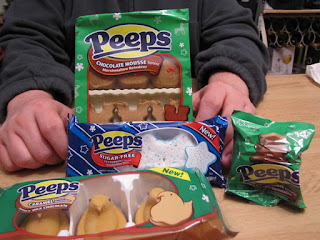 Photo Credit: Guantanamo Bay Public Relations Department
First, let us take a look at the Milk Chocolate Dipped Caramel Peeps. I am not a huge fan of caramel, so I started off not thinking too much of this candy. However, it does have a reasonably strong caramel flavor--I was expecting marshmallow with perhaps a hint of caramel, but the flavor is fairly pervasive. Being dipped in chocolate also helps. While I'm not a huge fan of this selection due to the caramel, this is a fairly decent candy. They also come in dark chocolate. 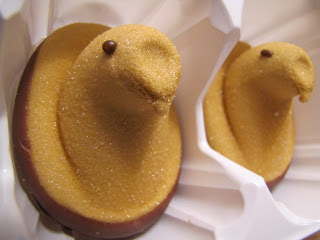 They also apparently like to get in barfights.
Next up is the Sugar-Free Peppermint Stars. This is certainly a different beast; as should be obvious, first, it's sugar-free, and, second, it's minty. It certainly doesn't taste sugar-free, most likely because the peppermint is pretty strong. While I am not certain this would replace a normal Peep or a normal mint, it's not a bad combination, and I could see eating these under normal, non-review circumstances. 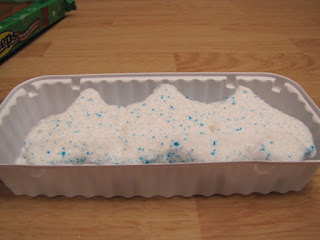 Don't let Frosty make buffalo chicken dip for the party ever again. He doesn't...get it.
Next up is the Chocolate Mousse, which are actually shaped like reindeer (get it)? 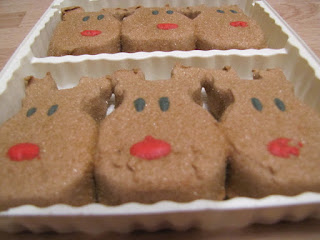 Call Blitzen's wife that one more time...
These were actually pretty good. Keep in mind that while these are chocolate, they are not chocolate dipped, and also it's mousse, so the flavor is a little different. I'm not sure I would prefer this over something that is actually chocolate, but it's certainly different enough of a flavor from the regular Peeps that I would consider it a pretty big step up. 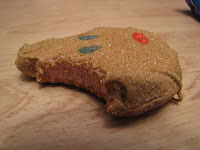 Also, have that money ready by next Wednesday. Kapish?
Last, we have the Milk Chocolate Covered Mint Christmas Tree. It is very similar to the Chocolate Covered Peep that I reviewed before, except that the Peep-like filling (which is not the same as the normal Peep) is mint-flavored. Oddly, this is much better. While before that Peep-like filling (PLF?) still more or less tasted like a marshmallow Peep, here, the mint flavoring kind of masks it. And I mean "mask" in a good way. Add to that chocolate, and you have something that actually pretty good. 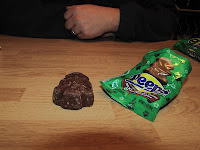 Thankfully, it does not smell like pine. Unless your tree smells like an Altoid.
So, what is the verdict? I am still not a huge fan of marshmallow peeps; I don't care for the consistency and the flavor is kinda gross. But here are four items that have enough "other" flavor that, aside from the caramel, I would voluntarily eat again. In particular, the Christmas Tree is pretty flavorful. Now, I doubt this will ever be my snack of choice; I suspect these have a fairly steep drop-off point for tolerance. But they are good, and both Peeps fans will still like it and non-Peeps fans such as myself will find something legitimately new.

So, Merry Christmas, one and all--a decent review of a Peeps product.
Posted by Crank Crank Revolution at 9:00 AM