So, after the Great Chair Disaster of 2011, I ended up engaging in a series of quite unfortunate seating arrangements, most of which I had to cycle through depending on whether I wanted to hurt my back or my knees. So, finally, I decided to break the bank and spring for an office chair.

I have had a wide array of luck with office chairs. Some have lasted forever, and those are the ones that I can no longer locate in stores. The last two office chairs I purchased both lasted less than a year, so I ended up shying away from them for a while.

Still, I decided to grab one online, and earlier this month it was delivered. 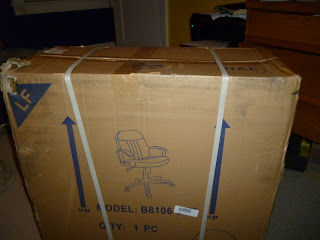 A cornucopia of delights await thee
There's nothing particularly special about the chair, and I spent a good hour assembling it. However, this chair had one feature that at first glance I consider to be the single greatest innovation of mankind's history: all of the screws were already in place. That's right: there wasn't this obnoxious plastic bag filled with eighty little bits, and a sketchy rice-paper diagram showing you which screw is screw A and which washer goes with washer X4. You already knew what parts went where--it was already done!
My enthusiasm soon waned, however, as it dawned on me--this means that every screw has to be unscrewed first, then screwed back in. Anyone who has ever assembled anything and woken up with quivering forearms knows that this effectively doubled the amount of work. So...there was that. Oops.
Still, the chair ended up being no problem at all. 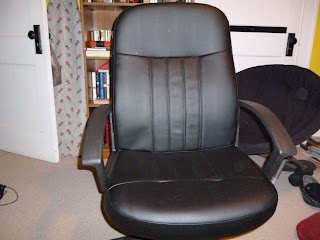 Welcome, once and future king
For those interested, this was the Boss B8106 Executive Chair, Black. So far it has served my needs well.
Posted by Crank Crank Revolution at 7:45 AM