As you may remember, I'm a fan of root-based beverages. While I'm not a fan of all of them, they often provide something different than the fairly standard cola and limon flavors that more or less dominate the market. Aside from sarsaparilla, there's birch beer and the standard root beer, all of which have a distinctive taste but are also very similar.

I've never gotten around to trying Ginger Beer, however, and finding a rather random selection of soft drinks at the local newly-opened Bottom Dollar Foods grocery store with quite a few bottles of it, I decided to give it a try. 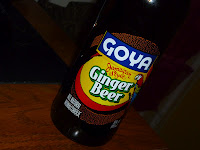 I'm not sure what "Jamaican Style" means. I can only assume it involves weed, but it's probably something lame like bauxite.
For starters, this isn't ginger ale. Well, it kind of is. It's clearly not the lightly flavored stomach-cure fizz we're used to from Canadian importers and British chocolate manufacturies. But while you can taste the ginger in ginger ale, it's also very weak.

At least compared to ginger beer. If you've ever tasted a raw ginger root--which I haven't, based on the fact that raw ginger root in the produce isle at the grocery store generally looks like a big basket of mutant mold--you know that it can get pretty strong. And that's exactly what ginger beer is. It is a very, very, VERY strong ginger ale-ish drink.

The taste is very spicy. Not Red Hot spicy, but close: it could easily be mistaken for liquified cinnamon pills. Every time I took a drink--much to my wife's annoyance--it was followed by a brief but loud coughing fit that made it seem like I was in the dining room making a concentrated effort to start smoking. No matter how much I drank--or whether they were gentlemanly sips or college tailgate-level swigs--I couldn't get used to the remarkably powerful sting of raw ginger.

This isn't necessarily a bad thing. It still tastes, essentially, like concentrated ginger ale with some darkening agents, so the taste itself isn't bad. In fact, once your taste buds broke down the shock of the original intake, the aftertaste was quite pleasant. However, I can't lie; I was barely able to finish a bottle. My throat felt like it was going to eventually shut down and not let me take any more in. I did, but I can't say it was the best idea in the world.

For the record, my wife couldn't finish her bottle.

I know I made fun of it earlier, but I don't really know what "Jamaican Style" means on the label. It's possible standard ginger beer is a lot milder. Somehow, though, I doubt it.

So there you have it. I kind of recommend it, because it's the sort of thing that is different enough to try, and I'm sure someone likes it. And I won't say I'll never drink it again. But I'd be hard-pressed to find something I would ever want to eat it with--this would strictly be a standalone drink, so its use is probably limited. Still, it's not bad and worth a try.
Posted by Crank Crank Revolution at 9:00 AM