It's the end of February, and that can only mean one thing: discount Valentine's Day candy! 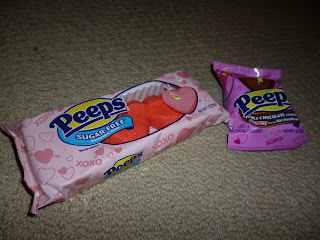 Or maybe Presidents' Day as well. But mostly sugar.
While there is always plenty of discount candy to be had, most of it was pretty standard stuff--overstock chocolate hearts and creepy paraffin licensed characters dressed in red. Thankfully my wife picked up some unique candy to try--sugar-free hearts and a raspberry heart-shaped Peep. 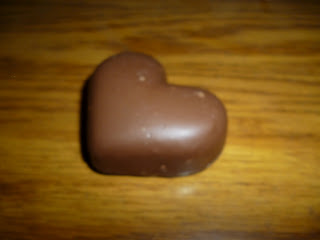 Regular readers of my blog are aware of my official position on Peeps. However, I have to hand it to the Peeps company: they know how to do holidays.
Unlike the Peeps Christmas trees, the Raspberry heart shown above is slightly different. I'm not sure if it's a different recipe or if it's just due to a change in the flavor, but it wasn't as firm as the other similar Peeps. Still, as a reminder, these treats aren't like the regular Peeps marshmallows. It's also very flavorful. I'm not a huge fan of raspberry, so thankfully the flavor wasn't as strong and the chocolate complimented it. 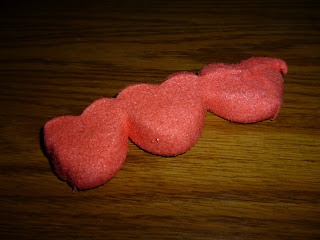 The sugar-free hearts were also very similar to the peppermint stars from the Christmas haul. Unfortunately, there really isn't a discernible taste. They aren't bad, but there isn't much going for it, either. And while both of these items are decent, they aren't that remarkably different than the Christmas Peeps. One wonders if the holiday cycle isn't going to run out of shapes but might run out of creative flavors.
Still, next year, both of these are something different than the normal and are cheap enough to add some variety to your Valentines day treats.
Posted by Crank Crank Revolution at 9:00 AM