Rolling in the Awards

I don't post about music very often because I'm not a particularly huge fan of popular music. Nothing wrong with most of it; I'm just at that age where everything after a certain year doesn't appeal to me very much. Oh, sure, there are plenty of exceptions--I have a thing for acts like Regina Spektor and Mumford and Sons--but keeping up with current music trends really isn't worth it to me. It's mostly because I'm old, and do things like calling singers "acts." Of course, I'm talking strictly about "mainstream" music that gets played on the radio--finding some of those other gems (such as Jonathan Coulton) is certainly a good thing.

So last night's Grammys weren't of particular interest to me. I dislike awards shows in general, regardless; I might want to know who won, but sitting through all the other, more boring stuff just doesn't appeal to me. I will gladly watch the highlights the following day, perhaps reading the results on Twitter or as they get released in the news. But the Grammys? I didn't think anyone watched that anymore, but for some reason everyone did this year.

Granted, it's probably because Whitney Houston died only a few days ago, so I sort of understand that. But I feel about the music industry how I'm sure plenty of people feel about professional sports--why celebrate the negative lifestyle of drugs and violence? It's unfathomable to me that Chris Brown is even allowed to show his face at the Grammys, let alone perform a headline song. Mike Vick gets sent to jail, but Brown (for some reason) gets a pass. And Houston? It's sad that she died, but it was after a lifetime of relentless poor decisions. I'm willing to say that we all have an obligation to help the addicted, but in the end there's only one person to help her, and that's herself, and she made the conscious decision to not do so.

[As an aside, I wonder if TV stars get in the least trouble. The Charlie Sheens aside, television stars tend to keep their lives on track. My theory is that the time commitment prevents them from getting too far off the rails. In music and movies, there's plenty of down time to abuse yourself; heck, musicians can still perform while high and/or drunk without anyone really caring. TV stars have much more of a time commitment. Just a theory, I suppose.]

Anyway, the big news of the night was actually something positive, and that was the performance of Adele. The darling of critics for her short time in the spotlight so far, she recently had surgery on her throat which could have easily ended her career prematurely. Already slated to sweep the night, she belted out an impossibly awesome rendition of "Rolling in the Deep" on the show. I highly recommend searching for it and watching. (Alas, I can't embed any of the "official" videos. Here's a link to a New Zealand television station with a fairly high quality version of it.) 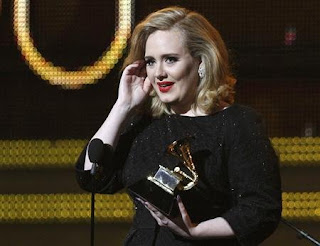 I'm a lukewarm fan of the Foo Fighters, but I haven't had time to track down their performance, which apparently was pretty good. (For the record, scientists have proven that playing "Best Of You" before you go in for a job interview guarantees that you will get the job.)

So, I'll probably never watch the Grammys, ever. I just don't care enough about the music industry to get excited about it. But through all the darkness that is the consequences of sex, drugs, and rock 'n' roll, it's good to see that the talent is still there.
Posted by Crank Crank Revolution at 5:21 PM