The Joke That Went Too Far

The week before Christmas, my wife was watching some show on her laptop. This wasn't on Netflix or anything; it was on the station's web site, which means that approximately every five seconds there was a break for an advertisement. (I don't recall what program it was, but knowing my wife it probably involved Mormons, female serial killers, or 25-year-olds pretending to be pregnant high schoolers who are majoring in poor acting.) Of course, these being the burgeoning first days of the internet, they were only able to line up one sponsor: Arm & Hammer Spinbrush. 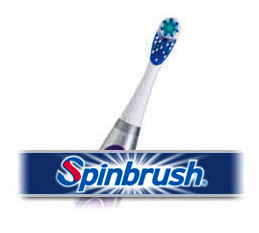 OH HAI. Have we met? Oh, we have? Still, let me extol my virtues to you WITH MAXIMUM OBNOXIOUSNESS.
Now, when I say that my wife watched a TV program on her laptop, I mean she watched an entire three seasons' worth of that one show in a row. When you do the math that means that I heard that commercial approximately 600 million times over the course of two days.

I am a good husband, so I kept the fact that every time I heard that ad I was one step closer to madness to myself, so I kept my mouth shut*. (I may have occasionally claimed to want to do horrible things to the A&H management for their decision.) However, I decided to do the next best thing possible and, as a joke, buy her a Spinbrush for a stocking stuffer for Christmas. That'll show 'em!

Well, it turns out that my well-received joke wasn't so much after all; my wife reports that it's actually a legitimately good product. I'm not telling the fine folks at Arm & Hammer that, of course; while it would be nice to report a positive customer experience, I also don't want to encourage a commercial that I still occasionally hear in my nightmares.

*Evidence may indicate that this last part is not true.
Posted by Crank Crank Revolution at 9:00 AM