The Saga Of The Stubborn Dachshund

Sadly, one of our dachshunds was sick last week. 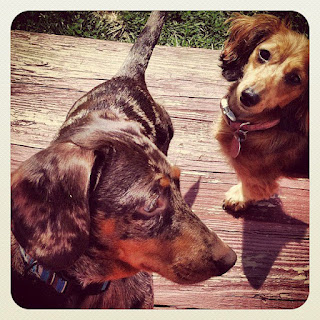 It was the one on the left. The one on the right just likes to bark a lot instead.
Dogs get sick, mostly because they insist on eating very disgusting things with a remarkable lack of remorse. And when you have hound dogs, who are basically bred with the instinct to specifically seek out and devour disgusting things, this tends to happen a lot. Unfortunately, finding the remote control is not classified as hound-dog target material.

Anyway, Dexter had been feeling a bit off since the middle of last week, but he was eating and wagging so we figured everything was just fine and he had reverse seasonal affective disorder. Friday he started eating grass, a telltale sign that something is wrong. (Dogs eat grass to force them to throw up. They also eat grass because why the hell not, so don't use it as a replacement Dr. Google.) He did, in fact, hork up a little, so I took both of their food bowls out of their crates and gave them water for a bit to let his stomach settle. (I took hers out because OH MY GOODNESS if you do something to one dog and not the other.) Saturday, I filled his bowl up for breakfast and, unlike every other day he's woken up, he didn't immediately devour it in like two seconds.

Something was clearly wrong.

Chloe also did not eat her breakfast, but quite frankly that's normal. She is a stubborn dog who thinks dinner is at midnight and breakfast is at three in the afternoon. (Teenagers.) So for most of the entirety of the day the dogs refused to eat their food and they laid around the house milking being sick and getting all sorts of attention from us.

At one point I offhandedly mentioned that when I took their bowls out on Friday I may have mixed them up--put Chloe's bowl in Dexter's crate, and vice versa.

So I switched them back. Both dogs started eating immediately. They will eat something dead and rotten in the back yard or find some indigestible plastic bit on the floor with nary a second thought, but SO HELP YOU if you switch their bowls around.

My dogs weren't sick. They're just OCD.
Posted by Crank Crank Revolution at 9:00 AM