Ever want to relive the deadly yet exciting world of Cold War espionage? Cold War: CIA vs. KGB is Fantasy Flight's card game that attempts to simulate this epic struggle. 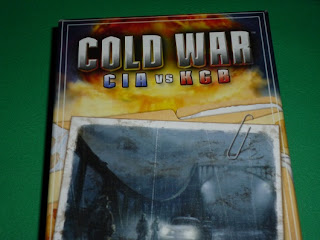 The object of the game is to accumulate 100 points. To do so, each player is trying to win an objective. These objectives can be one of two different things: it is usually a nation (a Cold War hotbed of conflict, like Angola or Cuba) or it can be an event, like a Summit Meeting or the Olympics. 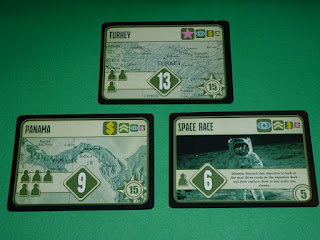 Examples of Objectives. Notice that "Space Race" is an event, while Turkey and Panama are nations.

During each turn, a new objective is turned over; each objective has a Population rating, a Stability rating, and a point value. (These ratings will be important later.) Players then select which agent they are going to use. Each agent has a different ability--while some are more useful than others, there is always a chance that your agent could be terminated. For example, one agent allows you to claim a bonus objective, while another will allow you to win the objective even if you lose. Sometimes agents are placed "on leave," which means they are ineligible to be used, and guarantees that you can't play the same agent twice in a row. 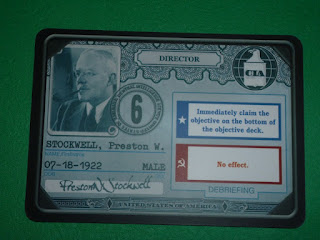 The "Director" agent, who can claim a bonus objective if the CIA wins.

Then, each player will take a turn dealing with a group. There is a deck of various groups that are used to win the objective; there are four types (Military, Economic, Media, and Political) and there is one of each numbered 1 through 6. Each player takes a turn either drawing a new card or activating their existing card; ultimately, they are trying to hit as close to the objective's Stability rating without going over. A player can only draw as many groups as the Population of the objective; likewise, the Stability rating is different for each objective.

However, each group can also be used in a different way. Once used they are "mobilized," meaning that they cannot be used again. Military cards can be used to destroy other groups (including your own); Economic cards can cause a normal card to be mobilized (or vice versa); Political cards allow you to move a group to your rival, or steal one of theirs; and Media cards allow you to look at the next group and decide if you want to take it, discard it, or leave it for your rival. 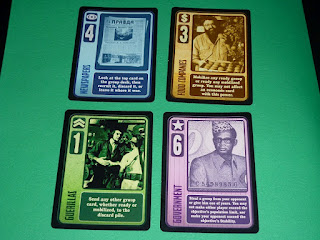 Examples from each of the group types (clockwork from top left): Media, Economic, Political, and Military

Since you are trying to hit a specific number, but not go over, all of these actions can have a great impact on your success. You can force lousy cards on your rival, or take out a key group, or take any number of options. When both players pass, the conflict is resolved; the player closest to the Stability without going over wins. There's an easy set of tiebreakers as well, since the fine-tuning of the actions will often cause both players to be very close to the Stability rating of the objective.

If either player ends up going over at this time, they cause civil disorder--which terminates their agent and gives an automatic victory to their opponent. Agents are revealed and effects are determined, and the winner tallies up their points.

All of the nation objectives simply give you points; event objectives give you a small number of points, but can also be used for a special ability (such as saving your agent if they cause civil disorder, or re-adding a terminated agent to your hand). You don't have to, but they can be useful--though you do have to give up the points if you do so.

When one player reaches 100 points, they win the game. Once you get used to the rules, a game can be played in a half hour to forty-five minutes. 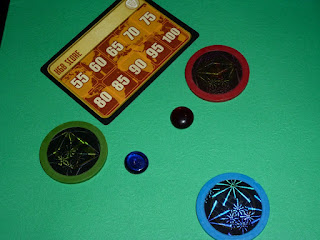 A few of the minimal parts in the game; mostly reminder tokens.

What I liked about the game:

What I don't like about the game:
The verdict? The game play is very well done, and you get a pretty good sense that you are engaging in this epic back-and-forth struggle for world domination. Still, without any sort of variation I can see it getting a touch stale, especially as experienced players who can tug the balance of power find themselves winning by the luck of the tie-breaker. I'll give it a B-. As an occasional game I would rate it higher, maybe even a solid A, but I think frequent play will cause this game to be much less fun.
Posted by Crank Crank Revolution at 9:00 AM