I really should have simply waited a few days before I wrote last week's post about needing a copy editor.

The Mitt Romney campaign, who I am assuming is embarrassed about last week's massively obvious spelling mistake, apparently still hasn't done much to rectify the problem. I'm giving the extraordinarily wealthy campaign some slack because they simply may not have caught it in time, but I doubt it.

Would you like to see a preview of the Romney campaign's new TV ad? 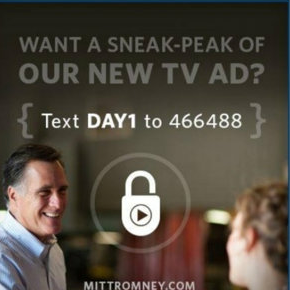 Three thoughts:
1) For crying out loud, you don't put a hyphen in "sneak peek." It's two separate words, not a Welsh divorcee. That's the sort of shit they teach you in Grade School 101, right before "Don't strap your dog to the roof of your car" and after "Don't hold down the new guy and forcibly cut off his hair."
2) Jiminy Pete on a Christmas cracker, it's "peek," not "peak," as in "I'm peeking into my tax returns and noticed I pay less percentage-wise than my secretary," not "I've reached the peak of my cognitive abilities and am rapidly approaching Dan Quayle levels of grammatical mastery."
3) Seriously, do one better than the current President and get the unemployment rate down by at least one person and hire some unemployed English major to look over your stuff before it goes out. This is downright embarrassing. Gingrich wouldn't be letting this stuff slip by. Just sayin'.

[Edit--Yes, I'm fully aware the original title to this post had a grammatical error. When I start getting paid to do this you can call me a hypocrite.]
Posted by Crank Crank Revolution at 8:15 PM