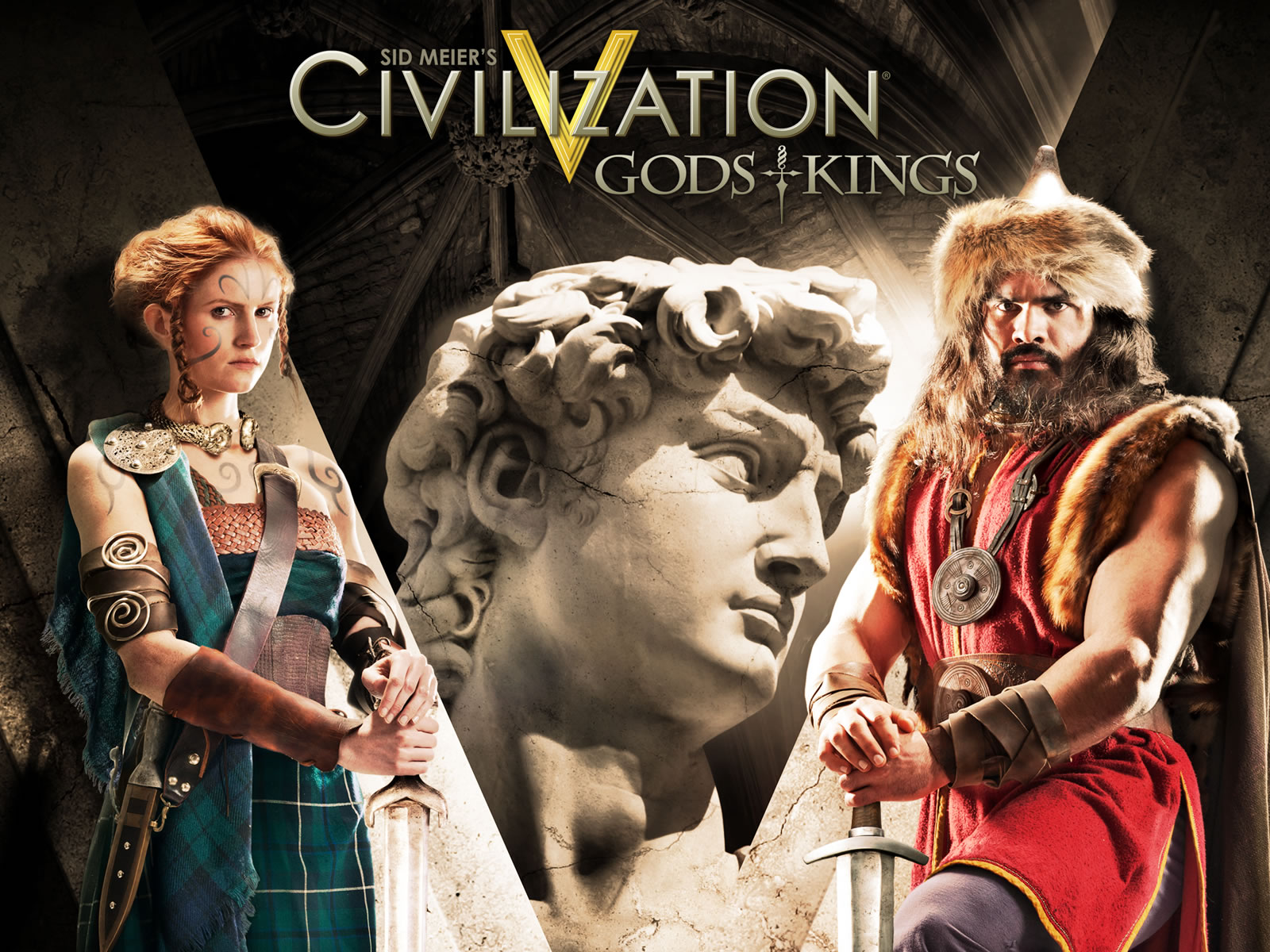 A few months ago, an expansion was released for Civilization V, called Gods & Kings. As per my previous posts on the original game, this might require some explanation.

The original game was released in late 2010. Since then, every few months, they have released some downloadable content (DLC): mostly new civilizations, maps, and scenarios. In addition, they ended up releasing an almost criminal amount of patches to fix a lot of the problems from the original game. While I love the Civilization franchise, the game as released was not their best effort, and each one of those patches was necessary. Finally, after about a year, they had a game that was decent to play (which, I would like to add, is really unacceptable. But I digress.)

Anyway, the downloadable content you had to pay for, usually a small token about (a few bucks for each). Of course, with around 15-20 downloads, it added up to well past the original cost of the game. Mostly, I'm pointing this out because this is not the expansion. If you pick up Civilization V: Gods and Kings, you'll still need to buy most of the DLC. Of course, you could buy a Game of the Year edition that does, in fact, include almost all of the DLC (but of course not all!), so if you are just now getting into it, buy the GotY edition and then the expansion and then download the remaining content.

[As an aside, I do support this new DLC method--microtransactions and letting customers pick and choose what they want much earlier seems like a decent business model--but companies are starting to get a little greedy about the whole thing. They have the potential to be wonderful revenue enhancers that will make customers happy, but they're also on the precipice of just ruining the whole thing.]

Back to the review of the expansion: it is worth it, and has made Civilization V feel much more like a traditional Civ game than it was originally.

There are two main new concepts in the expansion: Religion and Espionage, but there is a lot more. Let's look at each thing separately.

Religion: A new concept has been introduced: Faith. Faith is accumulated, much like Culture is, by constructing new buildings, having different social policies, etc. When you accumulate a small about of Faith you get to pick a Pantheon: a reasonably small benefit to your civilization, like earning Culture from Pastures or earning Faith from Natural Wonders. You only get to pick one, though, and it's first-come first-serve. (Thankfully there are over 20 to pick from.) After you accumulate a larger amount of Faith, you get a Great Prophet--who can found a religion. Now you get to pick a name and symbol for your religion, along with two benefits: one is a Founder benefit (the player who founds the religion gets the benefit) and a Follower benefit (each city where a majority of its citizens belong to the religion get the bonus). Once you earn your second Prophet, you can "enhance" your religion, picking an additional two benefits (same as before). As with Pantheons, it's first-come, first-serve. While there are plenty of options to choose from, earlier is definitely better.(As a bonus, there is always at least one less religion than player, so at least one person will be left without founding a religion. Better get crackin'!)

Once your religion is founded, it spreads naturally. You can also now use Faith to buy new Great Prophets along with Missionaries (to speed up the growth of your religion) and Inquisitors (who will prevent other Religions from creeping into your cities). You can also "buy" special faith-based buildings with Faith and, depending on the benefits you chose for your religion, you may get to buy non-religious buildings or units. Cities may be under pressure from other cities of differing religions, so there is a constant flux of believers both ways.

Wonders, buildings, and Social choices have also been updated to reflect the new Faith currency. (Stonehenge, for example, now grants a Faith bonus instead of a Culture bonus.) Plus, internal development isn't all that religion adds. Diplomacy is greatly enhances as well. City-States that follow your religion will degrade slower (and be quicker to forgive); likewise, other AI players will consider religion in their dealings with you.

In the end, religion is a net positive in the game. By allowing you to further customize your civilization, you are no longer tied to a specific play style based on the civilization you play. If you want to be a Cultural Mongol, you can go for it. While the mechanics still feel a little wonky--I'm still not sure how certain things are determined, and nothing is really explained all that well in the game--it ends up adding a lot with very little bookkeeping.

Espionage: Spies are around every corner, it seems. With Espionage, players are assigned a certain number of Spies with each advancing age, starting with the Renaissance. Spies are not units on the screen; there is a new Espionage screen, and you can assign tasks to each Spy there.

Spies serve a few different functions. When assigned to a rival's city, they attempt to steal technologies and gather information--like if they are plotting to attack another player. (This information can, of course, be passed on to the target for a diplomatic bonus.) If assigned to a City-State, you can rig their elections and thus gain a boost in favor. Or, you can assign it to your own city to defend it from your rival's spies. None of this costs anything; it's all more or less passively done.

Of course, there are risks. If your spy is caught, there's a chance it can be killed or sent home. Both end with a diplomatic penalty; getting a Spy killed means you will have to go without one for a few turns until a new one is generated. There's also plenty of anti-spying measures, such as police stations, that decrease a spy's chance of success.

Espionage is a nice addition but does not overly change the nature of the game. Since none of it really costs anything--you automatically gain new spies and missions don't cost anything to carry out--you can still use the same play style you always have. However, because you can build defensive anti-spy buildings, it does drag things down a bit on the production end. The limited range of missions is a blessing and a curse; since there's only about three things to do, it doesn't suck time and energy away from other things, but at the same time is very limited in usefulness. Still, in the end, it's a nice variation without being overly intrusive.

City States: I'll be honest, the new rules concerning City-States is much more interesting than the Espionage system, and about on par with Religion. There are a lot more missions one can undertake with City-States: spreading your religion, "bullying" (but not eliminating) other City-States, being bankrupt (and therefore gold counts more), etc. Plus, more than one mission can exist at a time. City-States also grant new benefits. Some have unique luxuries (porcelain and jewelry), and two new types of City-States were created: Mercantile and Religious. Their role in a Diplomatic Victory is thus more nuanced: with more missions to accomplish, it's no longer just bribing your way to victory (though that still works). You have more missions, espionage, and religion that influences how they vote.

New Wonders, Buildings, Units, Resources, and Civilizations: I won't go into this a whole lot, because there isn't much out of the ordinary: just a lot more variation on what you can do, plus a lot of new stuff to fill in what is needed for religion and espionage. Don't get me wrong, they are pretty nice--the new Civilizations, in particular, have a nice, wide range of new abilities--but there isn't much revolutionary. The only complaint I have is for the units: there are just too many of them, and a lot of them do not differentiate themselves from one another to be useful.

Balance: This isn't really an "enhancement," per se, but a consequence of all of the above factors: with religious benefits, new luxuries, new buildings, and new Wonders, the ability to harvest Happiness, Gold, and Culture has increased greatly. This is, in fact, not necessarily a good thing. When you used to play when Happiness hovered around 0 in the later stages of the game, and now it's easily 50, it changes everything--you don't have to worry about annexing cities. Even though maintenance costs are higher (now that there are more buildings, you still end up with a lot of excess gold. Obviously on higher levels this isn't as much of an issue, but it's still easier than before. It removes a lot of the hard choices that needed to be made in the past.

On net, all of these changes are very positive. While there might be some things out of whack from a balance perspective--and not necessarily in the direction we are all used to--it's still worth it. It's the standard price point of $30, but you should be able to find it for $20 at this point, and at that price it's hard to go wrong. And if you are one of the individuals who disliked Civ 5 and thought it took a step backwards, it's definitely worth revisiting.
Posted by Crank Crank Revolution at 9:00 AM