It's that time of year when the Limited Edition series of Pop Tarts gets released! This was a grand era two years ago with Kellogg's released the Pumpkin Pie Pop Tart, the ushering in of a new era of toaster pastry wonderfulness. They followed up last year with a pretty decent Gingerbread Pop Tart. This year's entry is the Marshmallow Hot Chocolate Pop Tart. 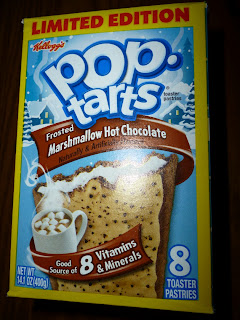 Why drink your hot beverage when you can eat it instead?

I'll be honest: there's another Limited Edition released called Spookylicious that I did not pick up. It's not that it didn't look good, but it appear to just be a chocolate filled Pop Tart with sugar icing. The bat-shaped candies sprinkled on it doesn't make it notable enough that I'll pick it up, I think, but I will immediately let all of you know if I end up changing my mind. (I swear I saw another Limited edition that was fall/winter-themed at the store, but I'll be damned if I can find it.)

Anyway, the Marshmallow Hot Chocolate Pop Tart is pretty good, even though it (to be honest) isn't much more different than chocolate crust and marshmallow icing. It seems, however, that the crust and/or icing is cocoa-flavored and not just chocolate, but I'm more than willing to chalk that up to the massive power of marketing persuasion.

Still, there is something remarkably unique when you heat one of these up. For whatever reason, popping one of these in a toaster and getting the marshmallow to melt and everything else get all crunchy honestly seems to turn this into exactly what a cup of hot chocolate would taste like if you ate it instead of drank it. I'm not sure if there is any other way of describing it.

That may be a little overblown, but the fact remains that I tore through this box pretty quick. I'm very much surprised that I liked the marshmallow filling; I normally don't, and the only way the S'mores Pop Tarts passed muster was because it was striped with chocolate. I don't think the Marshmallow Hot Chocolate would go over too well when eaten cold, but I never gave it a chance. I'll also admit that, like most limited edition flavors, this could get old, but I'm not even near that point yet.

Anyway, I recommend this as a perfect winter treat.
Posted by Crank Crank Revolution at 9:00 AM