It's fall, which means that pretty much everything--from coffee to flu shots--are going to be flavored pumpkin. This is, of course, an undeniably awesome thing, since pumpkin flavored food is, in the worlds of the great Mohandas Gandhi, "the shit."

So I was quite pleased to see that Hershey has come out with pumpkin flavored Kisses. 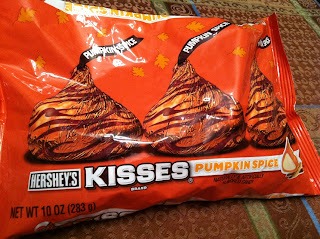 These are much easier to pop in your mouth than they are to carve.

Hershey Kisses, at this point, have a wide range of different flavors, from cherry cordial to caramel, so it isn't too terribly surprising to see Pumpkin Kisses. Still, it's unusual enough that it's worth checking out.

The first thing to notice is that, unlike most other Kiss flavors, there is no chocolate involved. While there is a two-tone color scheme going on with this candy, it's basically just one thing: pumpkin spice. Also note what I just said: It's pumpkin spice, not pumpkin, and there's a difference. These kisses taste like whatever flavoring they put in desserts to make them taste like pumpkin, but do not involve any sort of actual pumpkin filling. This makes sense, of course, for candy such as this, since it wouldn't be possible otherwise. 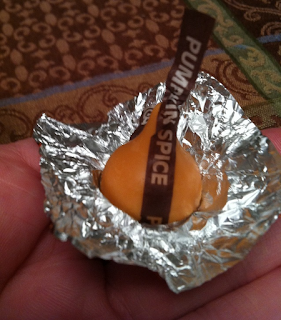 Also the name of the least popular Spice Girl.

Still, the candy does taste undeniably pumpkinish...perhaps just a little bit too much. While it is good, it is very, very strong. I enjoyed eating these, but I stalled out about halfway through the bag. Not because they are bad, but a little bit of them goes a long way. If you are interested in pumpkin-flavored candy it's definitely worth a try, but you are going to run into a fairly steep point of diminishing returns fairly quickly.

And thus brings me toone of the biggest travesties brought upon mankind: every season, scores of false advertising fills our candy aisles and plastic jugs shaped like jack-o-lanterns.

When I say "Great Pumpkin Scam," I don't mean the story that that charlatan Linus tried to pawn off on gullible kids on the great documentary "It's The Great Pumpkin, Charlie Brown." I mean something different, something much more important: candy companies routinely label things as "pumpkin" not because they taste like pumpkin, but because they are shaped like pumpkins.

This has let me to be horrifyingly disappointed time and again. Clearly we have the capability of producing pumpkin-flavored candy, but Big Candy refuses to do so. Take a look at this: 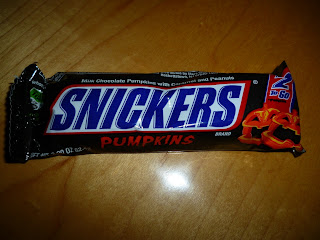 PUMPKIN-FLAVORED SNICKERS? I would invade small Middle Eastern nations for such a thing. Sadly, upon opening the packaging I find: 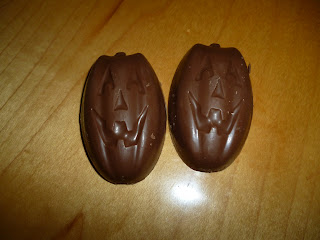 Snickers bars shaped like pumpkin, only smaller so you don't get as much candy.

And upon eating it I find: 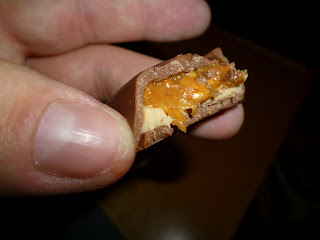 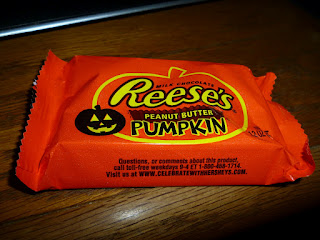 Also, the Reese's Christmas Trees do not taste like pine.

So now we have a dual-caste system when it comes to pumpkin Halloween treats: Candy that tastes like pumpkin, and candy that looks like pumpkin. And there is no way to tell which is which until you've opened the wrapper. This is a scourge that must be stopped! Write or contact your local congressman!

Anyway, I don't think it will be resolved this season, though I am certainly going to try. I leave you with one last Halloween review, the Cadbury Scream Egg (get it?): 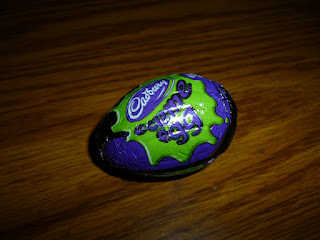 That rabbit needs to get to a doctor.

Basically, it's a Candbury Egg only with green filling. If you like regular Cadbury Eggs, you'll like these. If you are like me and you love Cadbury's chocolate, but the filling is too sweet, and you don't find any peculiar level of fun in peeling little slivers of foil off of it for ten minutes before you get to eat it, you'll enjoy these for a bit and then you'll just go buy a regular Cadbury candy bar where you can get all the benefit without the hassle. (Note: Despite this, I will still eat any Cadbury Eggs you place in front of me.)

Verdict: Hershey Pumpkin Kisses are good, but you'll be done with them pretty quick. Pumpkin-shaped candy is a fraud. Cadbury eggs are good regardless of color, and don't pretend to taste like pumpkin when they're not.