This is a quick review of some new Halloween candy I picked up at the drug store.* 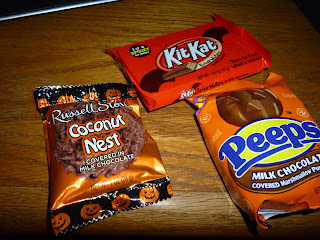 As evidenced by my last post about Halloween candy this year, I made a conscious choice not to expect any pumpkin-flavored candy. I was probably right in doing so; however, it was mostly avoided. Still, I was at least glad that the candy conglomerates were at least trying. Except they weren't.

Peeps Pumpkin: I should immediately point out that 1) this is a Peep, and 2) this is pumpkin-shaped and NOT pumpkin-flavored. So as you can see right off the bat it's got two points against it. That said, as I've written in the past few holiday candy posts, the Peeps Corporation has done a good job of tricking me into thinking that I like Peeps by 1) making the consistency a little more candy-like and less used-sponge-like, and 2) slathering it in a coating of awesome chocolate. So, as usual, it's not a bad candy, but still not something I would actively buy. Peeps fans or borderline fans should give it a try.

Coconut Nest: Russell Stover seems to do good work: reasonably high quality chocolate yet distributed through the mass market channels. Add to that fact that they've taken the awesomest part of their candy box--the coconut chunkish thing--and made a whole candy out of it is absolutely fantastic. So it's got a definite thumbs-up from me, and I eagerly look forward to the Russell Stover Dark Chocolate Caramel Brick. I also like the fact that they've made it vaguely Halloween-themed by calling it the ambiguous "Nest." Is that a rat's nest? Perhaps raven? Maaaaybe....BAT?? I dunno, but ambiguity tastes fantastic.

Halloween Kit Kat: I love the Kit Kat. So if you love Kit Kats, you'll love this--which is basically a Kit Kat with a printed design on it. No change in flavor, really. It's fun but nothing remarkable. (I was going to take a picture of the design, but you know what? It's supposed to be a surprise. Also: I'm lazy.)

Of course, I have one last bone to pick about this whole ordeal, and that's with Hurricane Sandy. My usual Halloween routine involves sleepwalking through the candy isles all month long, then the minute the stores open the day after raiding the drug stores and department stores for half-off chocolate pumpkins and stale-dated candy corn. This year, what with Trick-or-Treating being pushed until the coming weekend, I have no idea when this miraculous sale will begin. Now it will be a half-week of guesswork and tears.

It's worse than Guantanamo, I say.

*I find it terribly ironic that pharmacies--organizations supposedly set up to make us healthy and well--also have some of the most horribly unhealthy candy available. Not that I'm complaining, of course. That shit's awesome.
Posted by Crank Crank Revolution at 9:00 AM