Let's Start The Year Off Classy

The fiscal cliff has been a thing for a while. I've been deliberately avoiding discussing it for a number of reasons, but the main one is that it is full of exactly the sort of details and political posturing and general BS and none of it is going to matter all that much in about two or three months anyway. (I also feel that it was more or less blown out of proportion had nothing gotten done--which as of this writing is actually still possible--but that is neither here nor there.)

However, the absolute best thing to come out of the fiscal cliff disaster is this photo: 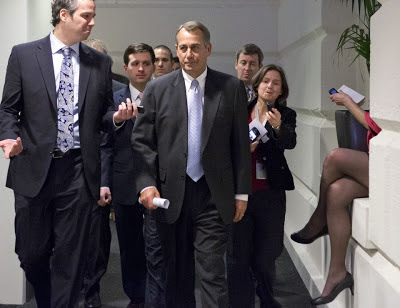 (It's an AP Photo if you want to write someone to get her number.)

Some lady, somewhere, is going to grow up to be the "woman whose sexy legs were available for everyone to see during the fiscal cliff negotiations."

Although knowing Capitol Hill, there is a 50% chance this is some sexy young intern and a 50% chance of being some old crone who happens to have caked up her legs with panty hose, silly putty, and broken dreams. I prefer not to think about it too much.
Posted by Crank Crank Revolution at 7:20 PM