According to a recent study, it turns out that, of all places, Pittsburgh is America's smartest city. 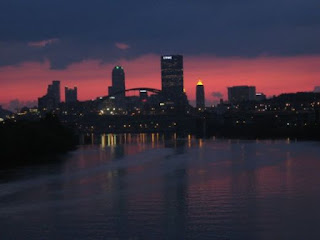 Of course, for those of us who have grown up in the Pittsburgh area, this is not news. Everything about the Western Pennsylvania area verifies the fact that we are of above-average intelligence. Evidence abounds, from the hard data collected from establishments of higher eduction to the fact that we invented putting french fries on salads. Perhaps, though, a few examples are in order.

Other cities saw hills and made reasonable accommodations as for how to travel around them. NOT PITTSBURGH. No, Pittsburgh carved the shit out of them and DROVE THEIR CARS RIGHT THROUGH THEM. Then they looked at the rivers and said SCREW YOU and they took all the stuff that they just scooped out of the hills and threw it all into a blast furnace and out came a thousand bridges and now they can go ANYWHERE THEY WANT. Pittsburgh makes sure that simple things like topography will never stop progress.

Other cities have a parking problem. They complain and they whine and they run to the courthouse to petition to get laws passed about parking. Does Pittsburgh do that? NO. They go in their garage and they get a dirty lawn chair. That lawn chair goes in the parking space, marking it as their own much like a feral dog. “THIS IS THE LAW,” Pittsburgh says. “This simple chair is our solution to the problem. No lawyers, no politicians, no suits. We have taken the law into our own hands.” Instead of being crybabies about it, Pittsburgh just gets it done.

History is very important to Pittsburgh . A guy named Henry Clay Frick who was pretty much an asshole shot his own workers in his steel mill while Andrew Carnegie was on a conveniently-timed vacation, so Pittsburgh tried to assassinate him because that was kind of a dick move. When Frick somehow survived, they instead named an awesome park after him. BECAUSE THEY COULD.

The "smartest city" designation relied heavily on science education, and for good reason. Pittsburgh built the robots that will build the robots that will be your boss one day. Where other cities put up bronze statues of long-dead generals or unnamed soldiers, Pittsburgh instead puts up hundreds of DINOSAURS. Why dinosaurs? Because dinosaurs are awesome and THAT'S THE ONLY REASON PITTSBURGH NEEDS. And then they paint them up so people can tell which dinosaur is by which building so people can adequately give directions. Then Pittsburgh cured polio and invented the Ferris wheel and designed the Big Mac, all of arguably equal importance.

Pittsburgh somehow managed to create Andy Warhol, an unlikely product of the salt-of-the-earth practicality of the industrial powerhouse known as the Steel City. And when that rail-thin albino flake started painting soup cans, an entire city of pinko-hating blue collar steelworkers and coal miners said THIS GUY IS ON TO SOMETHING, LET’S BUILD HIM A FACTORY SO HE CAN PAINT CELEBRITIES AND MAKE STAG FILMS.

Pittsburgh has solved the age-old problem as to what to do with the coleslaw and french fries being on the same plate next to your corned beef sandwich. They transformed barely digestible red paste into a mouth-watering condiment that, with only slight variations, can be a meal in and of itself. They take dumplings and a bit of potato and soak it in sauerkraut and fry it in grease and they cram the base of the food pyramid full of them and everyone just laughs and laughs at people like Jamie Oliver.


When the rest of the world said “You know what? Having the ‘h’ on the end of ‘burgh’ is so old fashioned. It’s time to get with the program. Let’s get rid of it.” Pittsburgh said "HELL NO. We’re KEEPING the H and there isn’t anything anyone can do about it." AND NOBODY COULD.

Pittsburgh has created, from the corrosive cocktail of intellect, determination, steel, and haluski, a diverse population of game changers. Pittsburgh produced Fred Rogers, the greatest, most kind-hearted person on the face of the earth, who inspired generations upon generations of Americans to be better to each other and to be better to themselves. Pittsburgh supported Roberto Clemente, a black Hispanic playing baseball when black Hispanics weren't allowed to do too much else, including baseball, who then died helping earthquake victims in Nicaragua. Pittsburgh also revered football players like Jack Lambert, Rocky Bleier, and Mean Joe Greene, all who more or less single-handedly prevented the spread of communism by winning four Super Bowls in the 70s as part of the Steel Curtain. A few decades later Pittsburgh looked at Hines Ward and said, “Yeah, dancing around for no reason except for personal accomplishment is a perfectly acceptable way for our Hall of Famer wide receiver to spend his time off season.”

Pittsburgh adopted Mario Lemieux, with or without his consent. He helped the Penguins win two Stanley cups. And then he got cancer and had to quit playing hockey. Then he said “SCREW THIS CANCER” and went back to playing hockey. The Penguins were broke and Lemieux said “No problem, I'll take an IOU.” Then the checks bounced and the Penguins said “Why don’t you take this poorly-run, money-hemorrhaging team instead of actual American dollars?” and Lemieux said “Sure.” Then he adopted Sidney Crosby and Evgeni Malkin and Uncle Jagr who doesn’t come to Thanksgiving anymore and then they all won a thousand Stanley Cups between them, give or take.

And yet we see Amish dudes clopping their horses down the freeway and think, “Good on them,” then pass them gently on the left. Pittsburgh generally doesn't care what you do as long as you don't pronounce the 'g's at the ends of your words and let people go left when the light turns green.

When the bowels of the earth opened up and devastated Haiti a few years ago, Pittsburgh said SEND US ALL OF YOUR BABIES. And they came and they saw the dinosaurs and the bridges and the french fries on the salads and they STAYED.

The steel mills closed down and Pittsburgh became the poster child for the collapse of post-industrial America, the backdrop of a thousand forgettable documentaries about What We Once Were And Will Never Be Again. But from the ashes of coke and pig iron and bauxite and gas wells rose a phoenix of a modern economy. It wasn't pretty and it wasn't without its dark periods, but by and large Pittsburgh knew that the future wasn't in praying fruitlessly for the mills to come back, it was to create something better than the mills.  Pittsburgh stands now as an ever-rising example of health care, education, creative innovation, and--if such a thing is important anymore--civic pride.

Pittsburgh ain’t perfect. No city is. Pittsburgh has problems with local politics and race relations and bankruptcy and traffic and not cleaning up embarrassing messes after country music concerts. We care too much about football and not enough about not electing jerkholes to the mayorship. But in contrast to what the city was, and how many cities are today, Pittsburgh stands as a reasonably effective example as to what the character of a city truly means.


A century ago, all the old steel barons slowly died and, to assuage their guilt from the confines of the afterlife, gave their money to fund universities, hopeful that their legacy would be one of a well-educated population with the knowledge base to lead America into the future. Perhaps that is a bit of an overstatement. But whether we lead by example or produce the instruments of the future or simply supply the talent to fuel the engine of progress, one simple, undeniable fact remains: we’re still way cooler than Portland.

Photograph courtesy of Tiffany Harkleroad.
Posted by Crank Crank Revolution at 7:59 AM