This is a new age that we live in. We have every bit of information from every era of history easily accessible from a small electronic box in our pocket. We have reached the stars and came back. We have found and subsequently cured a whole host of diseases. And we've decided that the next logical step is to start cloning household pets.

There is a company in (surprise!) South Korea that wants to clone our canine friends. Good, clean, perfect dogs, of course, since dogs are notoriously hardy when it comes to genetics. (I also can't possibly imagine why South Korea would have a need to clone dogs, but I digress.) But the practice has gotten a fair bit of news, especially since the company offering this service has launched a contest: they're looking for the UK's Worthiest Dog, something that turned into a bit of a diplomatic faux pas since the Koreans apparently forgot that the UK already has such a contest called the royal family.

Still, it's useful to think about exactly what traits would be useful in the perfect pet. They should have the ability to:
In case you are wondering, the sticker price of cloning a dog kicks in at about a hundred grand. Since I already got two perfect dogs for a fraction of that price, I think I made out pretty well. 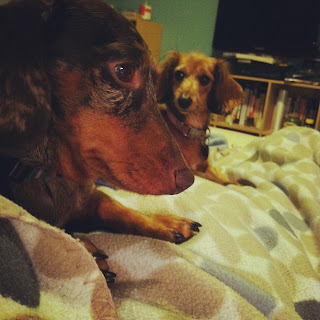