It has been a yearly tradition for America to be shocked by MTV's Video Music Awards. Every broadcast brings yet one more degrading act, dressed up as teenage rebellion while claiming no culpability in the degradation of Western civilization.

Popular music has always been the weather vane of cultural decline, and every generation thinks their own horrible music is just as bad as it has been in previous generations, and yet the next generation's music somehow becomes objectively bad. The very first VMAs way back in 1984 were already a shitshow; while Madonna's writhing bride routine is tame by today's standards, it's still pretty tasteless.

However, what good does it do to complain? To be honest, it is a little tiring. The cycle will continue as it always has, with the young generation represented by MTV shouting "YOU CAN'T TELL ME WHAT TO DO" and then grow up ten years later making the sadly belated realization that there are, in fact, consequences to their actions. Before I get all old man cranky on you, I do believe that pushing boundaries is one of the few ways to spark creative innovation; that doesn't mean that the vast majority of said culture isn't libertine garbage.

Still, every year MTV looks pushes things further and further, so in the next few years we should see some pretty wonderful slash awful shocking moments. Here are my predictions:


Posted by Crank Crank Revolution at 9:00 AM No comments:

So, After The Ceremony...


Here's a screenshot of something I saw earlier today:

To be fair, from a statistical standpoint, the chance of this happening should be near 100%.

Posted by Crank Crank Revolution at 8:28 PM No comments:

I went to see The World's End this afternoon, a movie by Edgar Wright starring Simon Pegg and Nick Frost. 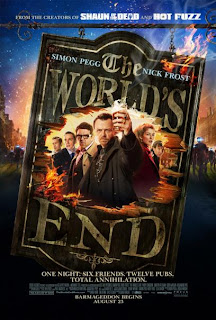 Gary King was the leader of a group of youths in the early 90's, where they attempted to do the "Golden Mile," a pub crawl of 12 bars that started with a place The First Post and ended with The World's End. That attempt failed, and all five friends slowly moved on with their lives.

Except for Gary, that is. He's a manchild who never grew up and continues to drink to excess and is a drug addict, has very little interest in education, and has no problem being a jerk to his friends. His friends have all become reasonably successful: Peter is a car salesman, Oliver (played by Martin Freeman, from Sherlock and The Office) plays a real estate agent; and Steven and Andy (played by Nick Frost) are shown to be successful in their careers as well. Gary convinces them that they have to do the pub crawl they never finished almost 25 years ago, despite the fact that they are all middle-aged professionals and not the reckless youths they used to be. He does so by lying by claiming that Andy agreed to go along (even though they haven't spoken for years), and then he gets Andy last by paying off an old debt and telling him that Gary's mother has died.

Once the five friends start on the pub crawl--in what appears to be a gentrified version of their old hometown--things start going weird. Sadly, talking too much more about the plot will give away too much, so we'll more or less just leave it at that.

This is the third of the Three Flavours Cornetto Triolgy (Shaun of the Dead, Hot Fuzz, and The World's End), all of which are directed by Edgar Wright and written by Wright and Pegg and star Pegg and Nick Frost. (Pegg and Frost also starred together in the TV series Spaces and in the alien movie Paul.) There's also a large ensemble cast that appear in some of the movies, such as Martin Freeman and Bill Nighy.

Unfortunately, I don't want to give away too much, so my review will have to be a little slight in detail. It is a science fiction film, so you do have to be a fan, but quite frankly even if you're not there's plenty to like. All of the cast members have great chemistry together; the movie does a fairly decent job of providing enough detail pretty quickly so you know who is who in the group. The plot is reasonably tight, at least as these types of things go, and you won't be bored for very long. The stretch of time between when they start the bar crawl and shit starts to go down seems a bit too long, but in retrospect there's a lot of foreshadowing that gets crammed in during that time. It's forgivable in hindsight but it possibly could have been a little more succinct.

A special point should be made of the writing: this is, in its essence, an action flick, but the writing is very well done. While there's perhaps a few too many conversations setting up emotional payoffs we don't really need, there's a lot of solid humor and a lot of great action all mixed in with a reasonably impressive science fiction plot. The entire movie moves along at a decent pace, and you're almost always in a constant state of being entertained.

If you've been a fan of any of their previous movies, you know what to expect. It is interesting to see how Pegg and Frost have effectively switched roles: Pegg is the slacker manchild while Frost is the no-nonsense voice of reason. However, you'll quickly see a pattern emerge--all three movies end up with a ragtag group of people trying to stop a large force that is attacking them. It's a good formula, but it is a formula. One gets the suspicion that if they continue to make these movies they're going to have to start coming up with something new. They've been inventive and original so far, but it's just starting to wear a little thin.


The only downsides to this movie? The only thing is the ending--and quite frankly I don't know why. It's a solid ending that makes sense, but there was just something off about it. It was perhaps not quite enough resolution for the length of the movie itself, but that's not really true--there is a resolution. So I can't quite put my finger on it.

Bottom line: It's a great movie, and probably the best I've seen this year. If you don't like science fiction, you'll probably still like it.
Posted by Crank Crank Revolution at 5:04 PM No comments: 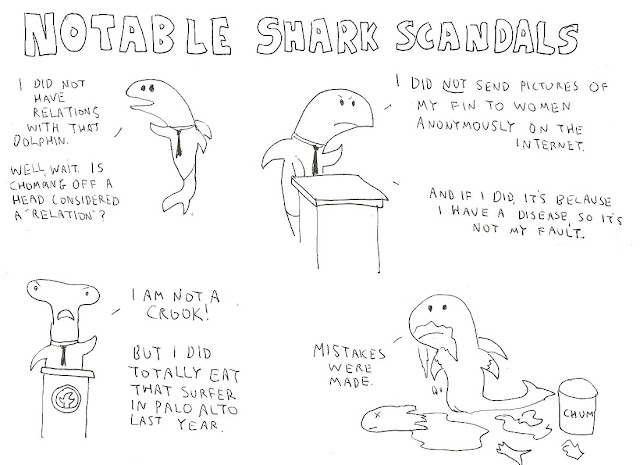 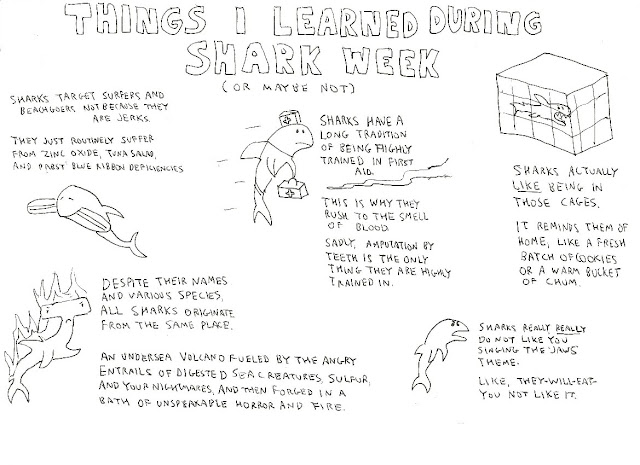 Shark Week: Sharklock Holmes and the Case of the Scarlet Chum Bucket 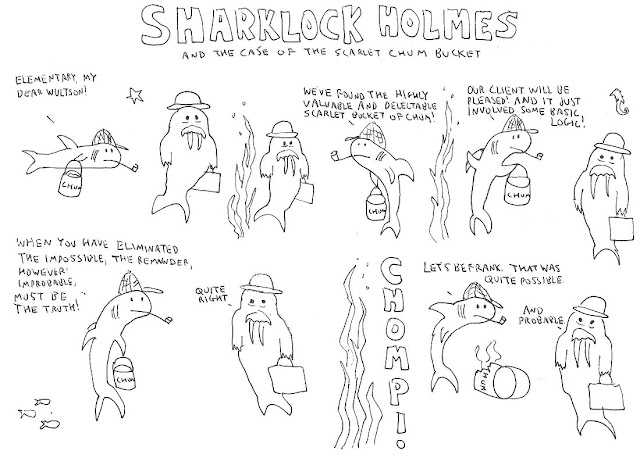 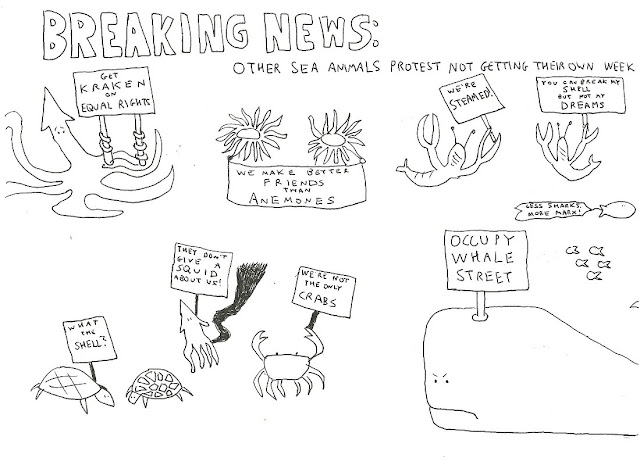 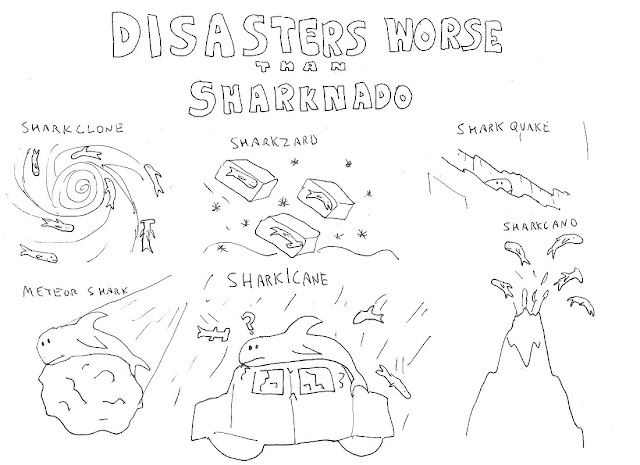 When The Internet Goes Down

First off, I apologize for the long delay in posting anything here for the last half of July; however, I assure you, it was for a noble cause.

Our internet went down.

Oh, sure I could have pecked out a post or two on my cell phone, but there are several circles of hell devoted to people whose sole punishment is to write more than 140 characters on a virtual keypad. And while I could, in theory, have gone to the local Dunkin Donuts and used their WiFi, I fear I would have been more inspired to eat a dozen Brownie Batter Donuts than an actual blog piece.

Sadly, the quest to get our internet back up and running was not exactly...smooth. We'd had the service for about four years with very little issue; the occasional outage wasn't enough to get outraged over, and, besides, there isn't much by way of competition around here. I won't mention the name of the company (although it does rhyme with the word "Windstream") and while their initial actions weren't bad--a decent troubleshooting session determined that we needed to replace our modem--the follow-up left something to be desired. After several different prices were mentions on several different calls, they promised to send one free of charge--which a subsequent call revealed that no order was placed. Then it was supposed to be overnighted but didn't make it. Then the original order was placed, but the rep I spoke with placed another "just in case." At one point we had no idea if we were getting zero, one, or two modems, and if it was coming Thursday, Friday, Saturday, or Monday. (Surprise! It came on Tuesday.) Everything is resolved now, but it was not a pleasant experience.

Unfortunately, my wife was not very pleased at this development; like me, the internet is practically a necessity. Knowing that this situation was less than ideal I decided that, even if I couldn't make the internet work, I could at least try to do the next best thing. Below are what I consider to be acceptable substitutes for the internet: Facebook, Pinterest, and Twitter. 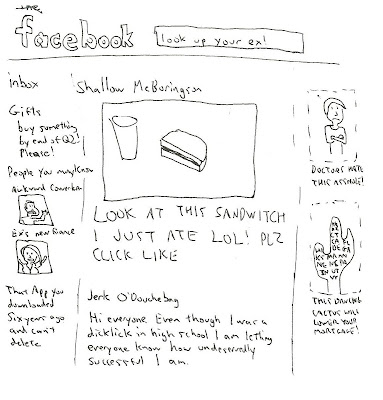 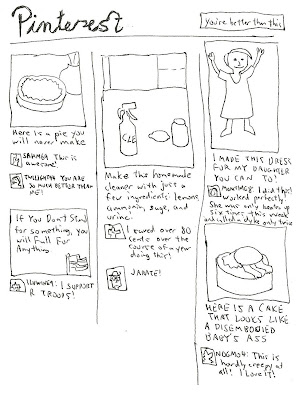 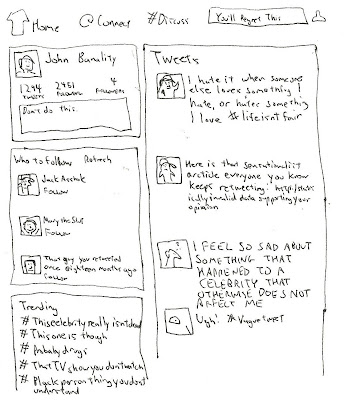 I find them to be startlingly accurate.
Posted by Crank Crank Revolution at 9:00 AM 2 comments: