Last night I had the opportunity to sit in with the social media team for the Pittsburgh Penguins via the Pens Social Suite event.

Late last week, I had entered a contest that the Penguins organization announced on their Twitter feed, and a few days later I was contacted by their social media contact to tell me that I had won. I would be attending the game against the Edmonton Oilers from one of the suites in the Consol Energy Center and given the opportunity to utilize social media during the game. I brought my wife as a guest--who was so excited she went out and bought us new Penguins shirts--and on the day of the game we met at the arena about two hours before the puck dropped. 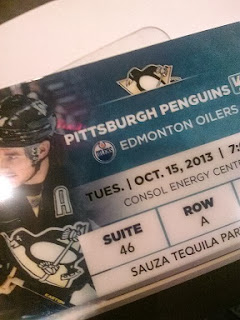 We got fancy PLASTIC tickets for this game! I feel like I need to punch a hole in it and attach it to my keychain to use the next time I get gas.

There were about ten other winners, along with their guests, so once everyone had arrived we headed on up to a fourth floor conference room. Once there, we got to screen the newest episode of In the Room, a behind-the-scenes look at how the Penguins operate. It functions much the same way that HBO's 24/7 program does, filming locker-room, training, and meetings within the organization to give everyone an idea of how things work before and after the game. It's certainly an interesting idea, and I'd recommend watching it if you are a Pens fan; even if you are not it's worth checking out for at least an episode or two. I am certain it gets more interesting as the season continues and new conflicts, worries, and high-stakes decisions develop. One of the more interesting aspects of the show is how amazingly similar working for a pro hockey team is to pretty much any other job--tired men in suits sitting around a conference table having a staff meeting and talking about coffee.

After the viewing, we them moved up to the suite. There, we got settled to see our view: 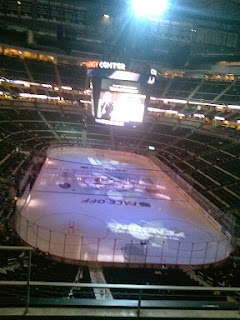 They're pretty good. They're so good I can almost see the last time the Oilers were in the playoffs from here.

Then, they did the greatest thing ever: they passed out Media Guides. 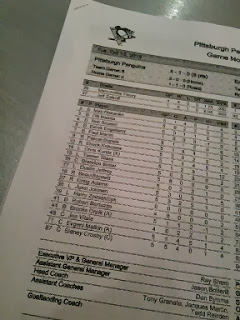 If you can spell "Harry Zolnierczyk" without consulting this guide, you are either a wizard or a charlatan. Either way, congratulations.

I don't know why, but I was absolutely fascinated with this thing. You know how you're listening to some broadcasters and they seemingly know every single stat for every single player for every team? Well, this packet is full of information like that. It's mostly current stuff (i.e., how many goals per season) but they include everyone who is on the roster that day and an alarming amount of information. Upon receiving this packet of modest xeroxed paper, I immediately felt significantly smarter and instantly became a Certified Hockey Expert. I started saying things like "The third line looked tired that shift. They should throw Adams in" and "Yakupov got away with something there; I expect a makeup call here by the end of the period" and I honestly felt like I just wasn't making it up. Oh, I was, but I didn't feel like it. Oh, simple Media Guide, you make me so happy with your false and unwarranted sense of detailed hockey comprehension.

The winners (but, sadly, not the guests--sorry honey!) then were escorted down to the rinkside center, where we were encouraged to take pictures, video, etc. 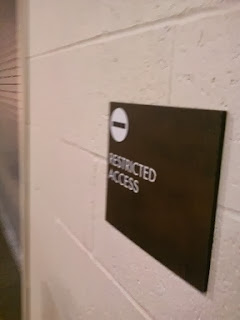 You know you've made it when you walk right past this sign and no one stops you even though you kinda look like the Unabomber.

Unfortunately, I was a lazy idiot and never really used Vine before, so the few videos I tried look more like an edited-for-TV movie where they cut out all the parts of Marc-Andre Fleury inhaling. Still, I got some good footage: 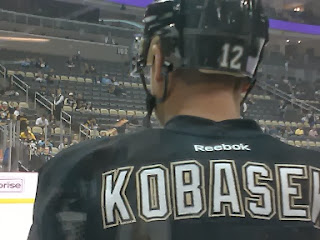 DAMMIT KOBASEW GET OUT OF THE WAY! SAVE IT FOR THE POWER PLAY! 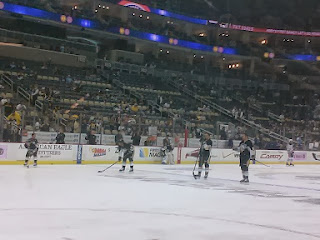 About two minutes to game start, we had to leave and on the way out I passed Jeff Jimerson and his alluring strawmat tresses*, where he then subsequently belted out a beautiful rendition of "O Canada" and then our own national anthem. It is times like this you realize that the "Star-Spangled Banner" kind of sucks. Thankfully, Jimerson did it justice and our national pride was retained.

Then, the game started.

During the game, we were encouraged to send out updates and tweets and messages via whatever social media platforms we wanted. We were provided facts and stats about the game if we wanted to send them out (I did, deliciously. It was probably the Media Guide talking). I had a lot of fun doing it, sending out horrible tweets that were in no way serious and then having very serious people retweet them. My only regret is that I didn't really have the opportunity to take any decent in-game pictures.

Hockey is an awesome game. It's a different experience live. It's a lot more exciting and the atmosphere of the crowd changes things. Previous games I've been to have been fantastic, both in the old Civic Arena and the new building. Still, there in the capacity of someone who was ostensibly providing information to the public about the game, I suddenly  came to a realization as to how difficult that can be. There aren't any camera close-ups of the players when they have the puck. There aren't any convenient text popups that hover over the player's heads. With everyone wearing the same helmet, moving as fast as possible, switching shifts every few minutes, having the number on their jersey only visible occasionally, and having no play-by-play commentary to help, it is effectively impossible to see 1) who is on the ice at any given time and 2) what specific player is, exactly, doing what. I'm sure the pros get good at it, but for me there was a lot of "Who did that? Who just scored? Wasn't he just on the bench? Where did he come from? I can't tell who is doing what and it's awesome."

As for the game itself, it was decent; there were a couple of goals per period, the score was tight the whole time, and penalties were kept to a minimum. Sadly, there were no fights (I know, I know). There was plenty of cheering for Fleury. Malkin netted a goal, thus now making him score a goal against every team in the league save, of course, the Penguins. Edmonton seemed slow and sluggish, but that just may be the West Coast "style" I hear other people talk about (i.e., indifferently lazy). The Pens only won by one goal (3-2), so while the Oilers might have looked kinda blah they certainly made a game of it. 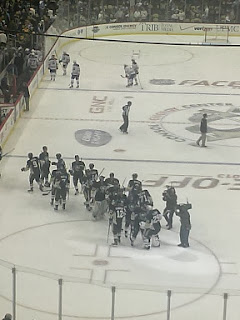 All in all, the experience was incredibly positive. While we were all clearly there for marketing purposes, it never seemed like it; our contact for the event was incredibly accommodating and gave us plenty of opportunities. The Penguins organization invited us in and gave us the opportunity to be there, and the staff at Consol went out of their way to make us comfortable. Mikey and Big Bob, morning radio hosts, were there, being friendly to everyone and hanging out and just being awesome people.

I know I don't really have to sell the Penguins to most of my readers; they already know how much good that organization can do. And for a company that is essentially exists for entertainment purposes, they do a lot of positive good for the community. Hopefully the future of the Pens will utilize social media for its fullest potential, and it looks like they know exactly what they are doing. And if there is one thing that I've learned, it's that you people really, really, really love that "What Does The Fox Say?" song.

*I know y'all love Letang's locks, but from a purely theoretical standpoint I prefer Jimerson's. He could run for mayor of London with that hair!