Don't Be A Tuna Head

The other day some friends had mentioned the old mid-80's video game Maniac Mansion. This game was one of the first huge graphical "adventure games" (along with Sierra's King's Quest and Space Quest games) for the PC market, and kickstarted a particularly memorable genre of video games for nearly a decade. These games, of course, don't really exist anymore, although they are still around in different formats. 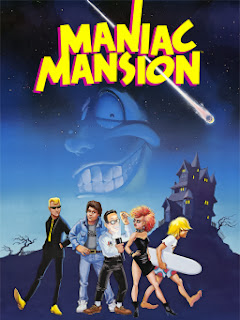 Sadly, this is not a representation of how the graphics looks in-game.

In Mansion, the player takes on the role of three different high school kids. You play with Dave, and get to select two other kids (out of a pool of six)--each kid has their own special abilities, and the game can be won (slightly) differently with any combination of kids. A meteor has crashed next to the mansion, causing its Scientist owner to become sufficiently Mad. The meteor, controlling Dr. Fred (and his family, wife Edna and son Weird Ed), forces him to kidnap people and suck out their brains for "research." One such person is Sandy, Dave's girlfriend, prompting the kids to enter the mansion to rescue the girl. It's all rather tongue-in-cheek, humorously utilizing a lot of tired tropes from old horror movies (and, conveniently, housing all interactions in the mansion itself to save on precious computer memory).

It's sometimes odd to think that younger gamers don't really know, or have never really played, an adventure game. For those who don't know, an adventure game relies more on puzzle-solving than action. And by puzzle solving, I don't mean switching tiles around or getting certain colored boxes in a row; I mean thinking about how to use different objects in different situations to get past obstacles.

Note that above I said that Mansion was one of the first graphical adventure games; adventure games existed for nearly a decade before that in the form of the text adventure. (I've written at length about it here.) In the old text adventure games, descriptions and objects were key--since no graphics could be used--and this mentality was brought over with the introduction of graphics.

To give an easy example of a puzzle, in Mansion there is a bottle of developer fluid on a very high shelf in one of the rooms of the mansion. Trying to simply pick it up causes the player to drop it, and the bottle smashes over a conveniently-placed grate. Elsewhere in the mansion you'll find a sponge, which you can pick up. If you go outside the mansion and look behind some bushes, you'll find an access hatch of sorts (which require either tools or a trip to the gym to be able to remove the grate from). Crawling in the hatch reveals access to some plumbing values...right before the room with the developer fluid. If you've previously smashed the bottle, you'll find the puddle of the fluid on the ground, which can easily be soaked up with the sponge. Voila! You now have developer fluid, which you'll need to solve some other problem down the road.

Sound convoluted? Of course it is! That's part of the fun.

The two main producers of graphical adventure games were LucasArts (now LucasFilm Games) and Sierra. Both had different approaches to game design; LucasArts focused on a point-and-click interface, while Sierra still relied on a text parser. (Eventually, both companies, and most adventure games in general, settled on a simplified point-and-click system.) LucasArts (after some experimentation) made games where you couldn't die or get stuck; Sierra had no problem letting you die and/or screwing up the game so it was unsolvable.Of course, these two companies weren't the only ones in the game; many other companies also made adventure games of varying (and mostly subpar) quality.

(As an aside, after Maniac Mansion, they released a game called Zak McCracken and the Alien Mindbenders, about a race of aliens trying to take over the world by causing the population to become stupid via the tones on landline telephones. It's just as goofy and humorous as their other titled, and I actually preferred it to Maniac Mansion.)

The games were fun, very imaginative, mostly humorous, and a blast to play. But the genre is more or less dead at this point. Why?

There are several reasons:

1. Replay. Unlike pretty much every other game genre, adventure games are really only good for one go. Once you win the game, you know how to solve all of the puzzles, so why would you play it again? There may be some utility in just walking through the story to enjoy the narrative, but after that there isn't much point. Contrast that to, say, an arcade game, where it can be a different experience each time.
2. Expansion of computer capabilities. Adventure games could be memory hogs, but they could also get away with a lot on account of their very nature; you might be able to squeeze a dozen hours of gameplay off of six screens. As graphics and processing speed increased, other games could offer a lot more of an experience at a cheaper cost. Adventure games didn't get any better by adding a hundred new locations, whereas an arcade game or first-person shooter did. Adventure games might be able to improve with graphics, but they excelled with writing and creativity--which didn't necessarily get better with better computers. Adventure games stayed static.
3. Changing tastes. As with all genres, adventure games simply went out of style. The release of Myst, for example, was an adventure game...but not really. It was more of an experience. You solved puzzles and there was a narrative, but it was all about simply clicking on things to get them to work. Add to that the release of The 7th Guest, another "adventure" game which was all about sliding tiles and getting colored boxes in a row, and the entire perception of adventure games was changed.

The release of Grim Fandango in 1998 is often seen as the death of the genre. The game itself was excellently done, critically acclaimed, won all sorts of "Best of the Year" awards--and sold extraordinarily poorly.* It didn't matter how well you made the game; people just weren't buying them anymore. There were still a few titles released after this time frame (The Longest Journey, and Syberia were both popular titles after 1998, but notably were produced in Europe where the genre lasted a little longer) but for pretty much all practical purposes adventure games were dead. (Notably, LucasArts did try and revive the genre, with modest success, with a new business model: They used their existing properties, notably Monkey Island and Sam and Max to release "episodes" on the internet. They worked just as well as the old adventure games, but they were sold per episode to capitalize on the narrative nature of the genre. This worked well enough that they produced several series of each.)

Of course, they really weren't--like all things, they were just absorbed and adapted. Notably, many first-person shooters adopted an adventure-style format, and games like Fallout 3 can rightly be considered both an adventure game and a first-person shooter. And with the introduction of Kickstarter, many small-press entities are trying to revive the format; since flashy graphics and processor-consuming number-crunching take a back seat to good writing and inventive storytelling, small programmers can get away with it. While it's doubtful the genre will even make a huge return, it's never going to go away completely.

*Supposedly, it actually didn't do too bad sales-wise, and supposedly still made a profit. But seeing the immense return that first person shooters were making in comparison, it was a devastating return for the title.
Posted by Crank Crank Revolution at 12:07 PM