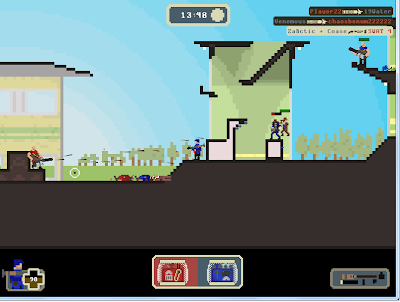 If you can't tell, it's a pixelated retro version of Team Fortress 2. It's called Gang Garrison 2 and it's fantastic.

I won't lie--I've always been a fan of these "retro" games ever since Homestar Runner would post them all the time. There's something elegantly charming about them, probably undeservedly so. And I used to specifically think about how exactly a Team Fortress pixelated game would operate, even going so far as to think about how, say, the Sniper would work, and what sort of game modes would be able to apply.

Needless to say, this particular incarnation of the game met all expectations I had. While it's not an exact duplicate of the standard first person shooter--that would be impossible--they managed to get the spirit of the game pretty good.
Posted by Crank Crank Revolution at 9:00 AM