I noticed on the store shelves a few months ago a new product called Cracker Jack'd. Modeled after the old standard Cracker Jack confection (caramel popcorn with glazed peanuts), they presented a wide array of new and different flavors. A bit hesitant--I've been burned by brand derivative products before--I finally got around to picking some of them up. There's seven flavors overall; the three I'm reviewing today are Cheddar BBQ, Zesty Queso, and Spicy Pizzaria. (The others are Berry Yogurt, Buffalo Ranch, Salted Caramel, and Peanut Butter and Chocolate, with a few regional test flavors in different markets.) 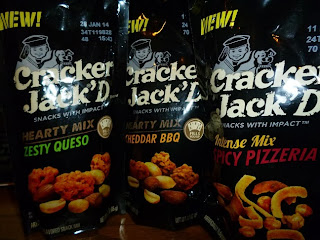 I'm always up for some new flavors that aren't candy, so I was looking forward to this...except for the price. These packets are 3oz each and they retail for $2.49. That's pricey for a small amount of product, even if it's a "premium" version of an iconic brand. Obviously, most places sell for less than that, but most places don't get much lower than a buck fifty.

Anyway, I eventually got around to acquiring them, and the verdict is actually pretty good. Spicy Pizzeria lives up to the "spicy" end (not so much the pizzeria end, but that is hardly unexpected). It's good and probably my favorite of these three. Zesty Queso is also good; it's the mildest of the bunch, despite its name, but hold itself pretty well. I was unsure of Cheddar BBQ--most BBQ snacks are iffy to me--but these ended up being very tasty. It's probably also the strongest of the bunch; both the cheddar and the BBQ are perhaps a touch too strong (I could smell them in my nose twenty minutes after eating them) but that's not necessarily  a bad thing. Tthe Zesty Queso and the Cheddar BBQ relied on little granola clusters to deliver the flavoring for each; I'm not sure what I was expecting, but I figured it would be nuts, and in any case ended up being surprisingly effective.

(I had taken a picture of each of the snacks dumped out, but quite frankly they all looked the same and none are any different than what you see on the covers above.)

You'll notice that there are two different "lines" represented above: the Zesty Queso and Cheddar BBQ are part of the "Hearty Mix" (they have nuts) while the Spicy Pizzeria is part of the "Intense Mix" (relies more on spices, no nuts). (The Salted caramel is part of its own savory mix.) I am hesitant about the other flavors I haven't tried--I'm not sure if sweet would work with this concept, although I'm sure I'll probably try them eventually. (I would have gotten Buffalo Ranch had it been available; it's the only other flavor I specifically want to try. I have zero desire to have Berry Yogurt.)

That said, these aren't perfect. They are extremely flavorful, and while you'd think that would be a good thing, it isn't immediately great. I ate one packet and almost got overwhelmed with the flavor. Even at a paltry three ounces, there's more than enough for one sitting, but it might not really be enough to satisfy any hunger cravings before you have to stop eating. I almost wanted to cut this with some actual Cracker Jacks to even everything out, and that might not be a bad idea.

The other thing, as I mentioned above, is the price--$2.49 is too much for what you get, at least in my book. I get that it's not supposed to be a bad of potato chips or a huge sack of pretzels you chew on, but to pay the same price for this as an entire 12 or 16oz bag of pretzels seems a little excessive.

One last drawback--they don't have any prizes. Of course, given the quality of regular Cracker Jack prizes now, that actually might be a benefit.

So, in the end, these are pretty good, very flavorful, and worth trying...it just may not be worth the list price.
Posted by Crank Crank Revolution at 9:00 AM