Thank You...Thank You Very Much

Due to some unfortunate circumstances* for the first time in twelve years I did not have my work ID badge. So upon a frantic search of my car just to make sure, I had to suck it up and take the walk of shame up to my work building. There, I had to wait patiently outside in the cold until the security guard noticed me and buzzed me in. I then had to humble myself, hat in hand**, and ask for a temporary badge, which I had to wear as a scarlet letter around the hallways of my office.

Now, the fact that I had not forgotten my badge also means that my picture hasn't been updated in a while. So, when I gave the guard my name he brought up my photo in their system and said "Oh! You're Elvis!"

Now, I have been, in my lifetime, compared to the following people:
1. Fred Savage
2. Jaromir Jagr
3. Elvis Presley

So this wasn't a huge surprise. What was surprising was the alarmingly cavalier way he said it, as if all of the security guards simply knew me exclusively as "Elvis." There are worse things to be called, I suppose.

The guard then asked if I was deliberately going for an Elvis look; I sadly informed him that it was genetics, not a conscious effort to look like The King. We then chatted briefly about how he used to dye his hair to accomplish the same look, but that was a few decades ago. 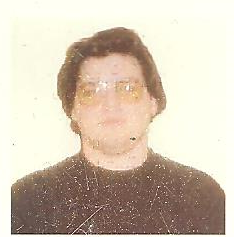 For the record. Let's just say I'm not skinny Elvis.

Now, personally, I feel that my work photo makes me look more like Jim Jones's mug shot than Elvis, but to each their own.

Anyway, we got everything sorted out. As I swiped my badge to go into the hallway, the guard yelled "Elvis is in the building!" Ten points to Gryffindor for the security guard on that one, because that was pretty damn good.

*I was an idiot and forgot my badge at home. I blame lead pipes or mercury poisoning.
**If I wore a hat. Which I don't. Good visual, though, no?
Posted by Crank Crank Revolution at 9:00 AM