A New Presidents Day Tradition We Can All Get Behind

So, as I was spending my copious amounts of free (non-fretting) time today, I thought of a grand idea that I believe will successfully unite all Americans.

Many holidays are associated with food. You have turkey and pumpkin pie on Thanksgiving; candy canes and fruitcake for Christmas; dime-store taffy and razor blades for Halloween; and apple pie, potato salad, and food poisoning on Independence Day.

So...why don't we have an awesome associated food for Presidents Day?

I mean, c'mon--aside from @eleanorstrouser's twitter stream all day each year--there really aren't any Presidents Day traditions. Oh, I'm sure some Virginia urbanites get a lame parade, and we all enjoy getting shoes half off at the local Foot Barn, and probably a bunch of kids got to trace their hand on construction paper to make George Washingtons to hang on the fridge before they (for some unknown reason) get a three-day weekend. But by and large, unless you work for the government or the bank, you had to go to work today just like everyone else, and when you got home there weren't any Presidents Day gifts wrapped and placed under the Constitution to open up.

So I propose a new holiday tradition: Every Presidents Day, we all enjoy some peanut butter pie.

Why peanut butter pie? Well, why not? Sauerkraut has nothing to do with ringing in the new year. Ham has no special place for Easter (except to make Jews uncomfortable, I guess). Corned beef and cabbage would make sense on St. Patrick's Day only if being 1/128th Irish actually classified us as Irish (hint: it doesn't). There's no immediate correlation between peanut butter pie and Presidents Day except that Presidential History is awesome, and peanut butter pie is awesome.

So the real reason is: why the hell not?

I declare that, by this time next year, I will have mounted a massive campaign to create this tradition. It's a modest addition to an otherwise unremarkable holiday. And by massive campaign, I mean I will tweet it and then forget about it until the evening of Presidents Day 2015. But don't let that stop you from launching this juggernaut: next year, and every year after that, we shall declare this a new tradition. 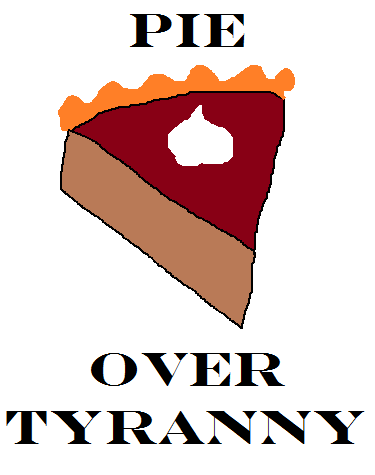 And if you're one of those communists who "claim" to be "allergic" to "peanuts," then feel free to make a Nutella pie.

Doesn't your mouth water over the thought of a delicious, creamy, freedom-filled peanut butter pie? I think such an awesome tradition would make even the most cynical American give a tepid huzzah for Richard Nixon in exchange for some pie.
Posted by Crank Crank Revolution at 7:41 PM