Yesterday my wife and I went to see American Hustle, a fictionalized portrayal of the ABSCAM fiasco from the late 1970s. It stars Christian Bale, Amy Adams, Bradley Cooper, Jennifer Lawrence, and Jeremy Renner. 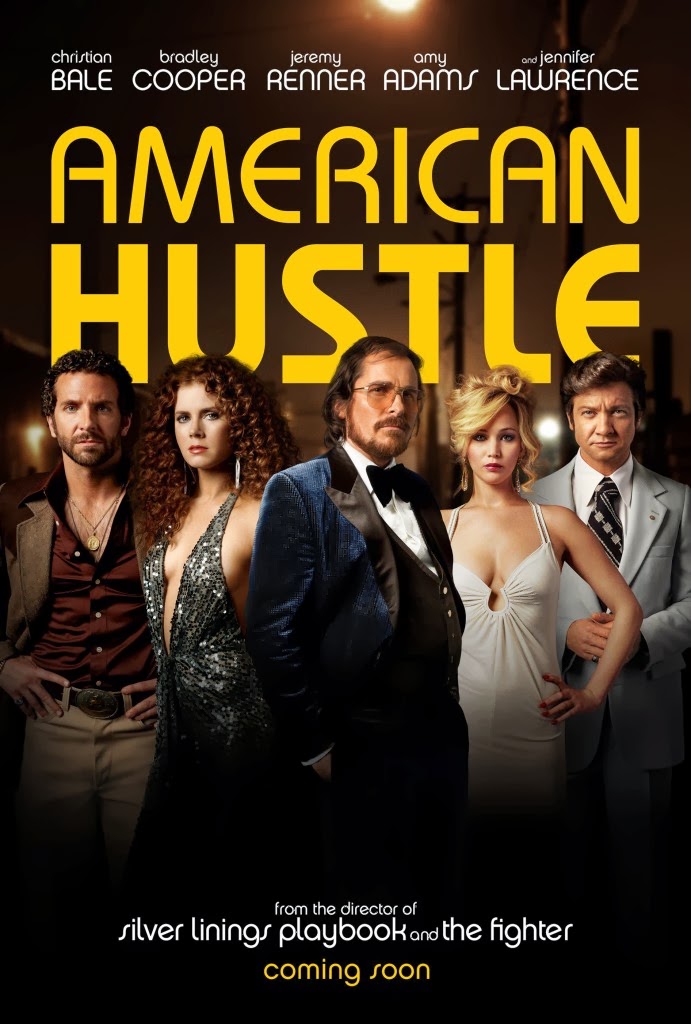 This isn't an accurate retelling of the famous sting operation, where several congressmen and other politicians were caught in an FBI mission where Arab businessmen bribed the politicians to help with various developments. In fact, the movie starts with the teasingly accurate "Some of this actually happened," a kind of poor-man's "Based on a true story." Still, by setting the foundation that this is (more or less) how everything went down, it lets the rest of the cast and script breathe.

The movie starts off with Irving Rosenfeld (Bale, looking wonderfully sloven), a mid-level con artist, working with Richie DiMaso (Cooper), an overeager FBI agent, and Sydney Prosser (Adams), who is posing as English royalty. They are trying to rope Camden, New Jersey mayor Carmine Polito, a good-hearted if naive politician caught up in trying to do the right thing for his constituents. It quickly flashes back to Rosenfeld meeting Sydney at a party where they hit it off, and they soon pair up to start conning businessmen in the malaise-ridden Carter economy who are looking to keep pace with skyrocketing inflation rates.* Then introduced is Rosenfeld's unhinghed wife, Rosalyn, who basically ruins everything she gets into.

Rosenfeld and Sydney are soon are caught by DiMaso, who then uses them to catch bigger fish--four guys and he's off the hook. One of these fish is the mayor (now, we're brought back to the beginning of the movie), and they introduce a fake Arab sheik to use against bigger and better politicians. Of course, everything starts to unravel--the mafia gets involved, Rosalyn starts blowing the operation, DiMaso starts getting greedy with who he brings down, and so on. We eventually see the entire operation both succeed and fail, with good and bad consequences for everyone.

It's an entertaining movie, and with an all-star cast like this, you're expecting the acting to the fairly good. I was impressed across the board and, having known something about ABSCAM beforehand, found it to be true in spirit if not in detail. There's enough of a plot to keep you engaged without bogging you down in the financial details usually necessitated by this sort of thing. And there's some genuine unexpected twists towards the end that make it satisfying.

Probably the biggest accomplishment of the movie was how it painted the spectrum of morality. There aren't any good or bad guys here. The con men are bad (they're, um, con men) but they know when to stop and don't like fleecing the undeserved. The FBI is looking to take down corruption, but their overzealousness brings down a good politician. And the mayor is a good guy with great intentions, but also realizes that, in 1970's New Jersey, trying to revitalize Atlantic City without bribery is a fool's errand. Everyone has their good and bad sides, and the movie even references the fact that the real-life ABSCAM operation drew a lot of criticism for being unnecessary in a nation still reeling from Watergate--and had shades of entrapment to boot. It reflects the national mood of the time that, yeah, while it caught some corrupt politicians, in the grand scheme of things it was an expensive, morally ambiguous operation that ended up not really accomplishing a whole lot.

While all of the actors stood out, I was pleasantly surprised by Louis CK. His part isn't huge, but here's there pretty much from beginning to end, and his participation is crucial to the story. He's a comedian and his part is fairly comedic, but it's done in such as way as to be seamless throughout the entire plot.

There are a few negatives about the movie, of course. The love triangle between Sydney, Rosenfeld, and DiMaso was a bit boring. While it was necessary, it was by far the least interesting thread in the plot, and they spent way too much time developing it. The writing and pacing could have used some tightening up. There's a minor plot point--Rosenfeld needs to take heart pills--that just seemed like an awkward way to insert some artificial tension onto the screen. Also, while Jeremy Renner as the mayor was very good, he just looked too young for the role he was cast in. But these are all minor issues in the overall assessment of the movie.

Is it Best Picture quality? I'm not sure; I certainly think it's a good movie, and I've seen worse Best Picture winners. I think the plot and its uneven pacing will cause it to require a second look by critics, and that's not without merit. But overall, I'd recommend anyone to see it.

*Sadly, the movie doesn't go into the details of this economic disaster, but I suppose that's a good thing for the moviegoing audience who doesn't get off on historical economic situations.
Posted by Crank Crank Revolution at 9:00 AM