Stephen and Tiffany and The Case Of The Overturned Car

It's springtime, which means it's time for rain, and flowers, and love, and overturned cars in the middle of nowhere. 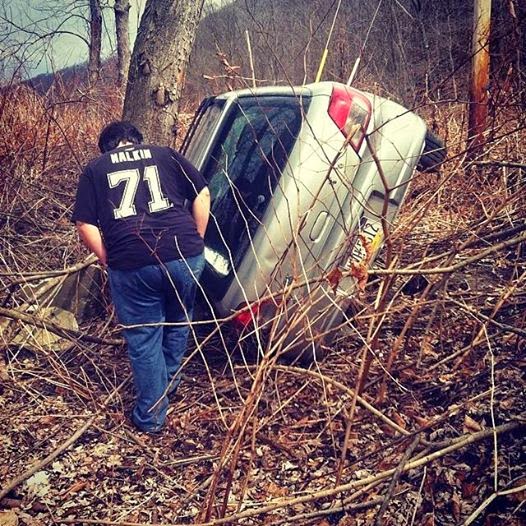 This may be hard to believe, but this is ME in the picture, NOT Evgeni Malkin.

This past weekend my wife and I went geocaching which, as you know, can take you to some...unusual places. Of course, we're complete wusses, so we usually don't go anywhere too exotic, leaving those five-stars to the restaurant critics. (Some day we will rise to the challenge, and prevail, by which I mean we'll get lucky.)

Anyway, we decided to try and find one just off the main road. Despite the picture above, we weren't all that far from civilization; just a county road and a turn or two. But we were near 1) a coal mine, 2) a railroad track, and 3) a poorly-drained swamp. So, you know, the setting for the next American Horror Story: Pennsyltucky.

So I ask, dear reader, that you pass no judgement on me, because we pulled off to the side of the road, saw the railroad tracks, saw the empty cans of Keystone Light, saw this overturned car, and legitimately thought "Yup, this seems exactly like the sort of place where there would--nay, should--be an overturned car, so it's not really that big of a deal." And then we went looking for the geocache.

It was only after another vehicle had pulled up that we thought that perhaps this wasn't just a standard, routine, run-of-the-mill overturned car. A gentleman got out and asked us if that was our car; we answered that it was not.

"The dome light is still on," he said.

Now listen. I realize that at one point in my life I had harbored a pipe dream of becoming a private detective. I like to think that I have all the deductive capacity of Sherlock Holmes with all of his charms, and I'm just as pasty white as Data from Star Trek with the fashion sense of Nancy Drew and maybe just a dash of the Great Mouse Detective. So I will admit to a tiny piece of embarrassment when I realized that this is the exact sort of thing I should have noticed if I ever want to achieve my dream of starring as a quirky investigator on the USA Network.

Well, as you can see above, I was brave enough to check to make sure there weren't any injured bodies in the car (there weren't) or if there were anything to note (lots of paperwork strewn about). I also looked to see if there were any other signs of evidence (there was: my wife found tire tracks, proving that someone drove straight into the ditch above without even stopping, proof positive that she would probably get top billing on our comedic-based mystery-solving show. Now, now, FX, don't get in a bidding war with NBCUniversal!)

Anyway, we didn't see much else of note: no blood, no telltale signs of a meth deal gone bad, no overt evidence that Carlos the Jackal had cut the brake line. The kind gentleman who shamed my investigative prowess said he would notify the police, and then we decided it would be best to leave this to the authorities.

Still, it left a lot of unanswered questions. What this a simple drunken joyride gone wrong? Was this an elaborate plan to commit insurance fraud? Did the people in charge simply run off to avoid detection? And, most importantly, can we get John Hodgman to play our long-suffering boss?
Posted by Crank Crank Revolution at 9:10 PM