Adventures Of The Romantic Kind!

As everyone knows I am a collector of the odd and inspired. Or rather, the odd and inspired have a way of making its way into my possession. Sometimes I come across, through various nefarious methods, something amazingly awesome. Don't ask me how I acquired this particular gem or why I bothered getting it in the first place, but just pause and marvel in its greatness.

I present to you, the presumably legitimate but likely pirated copy of the Chinese* version of HBO's Sex and the City. 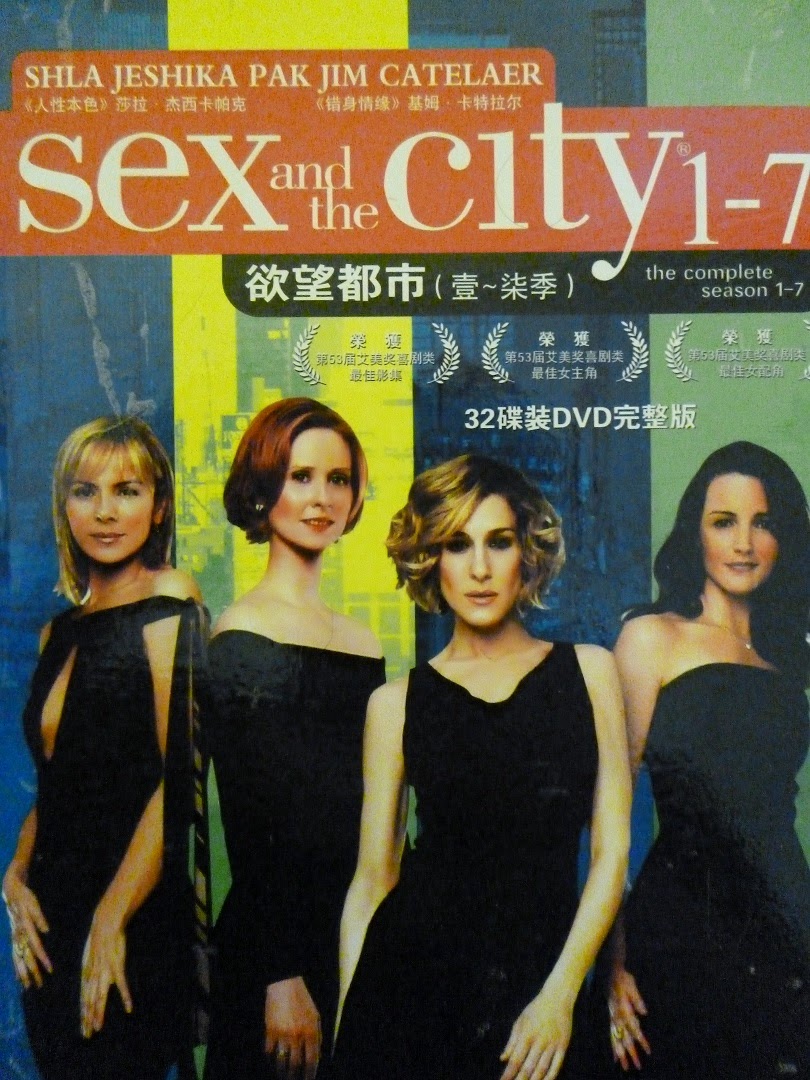 Now, it shouldn't surprise any of you that I am not normally a viewer of such fine television programming as Sex and the City, but even I was intrigued. The ChiComs aren't really known for their desire to live like mid-forties New York sexual deviants, nor was I aware they wanted to watch a show with a lead that was something they eat regularly for dinner.** So I didn't really expect the demand for this product to be high enough that it was worth creating, especially not a collection of all seven seasons. But then I realized that there is a very good chance this is not exactly what one would consider an authorized copy.

Still, it's incredibly amusing to see. As you can see above, this special edition of Sex and the City stars one Ms. Shla Jeshika Pak and Jim Catelaer. I am assuming the latter is either related to Kim Cattrall or there are some major projection issues from the person who wrote the copy. There is no mention of Krstain Dves, Karst North, or Crynta Nixon (the Chinese, of course, not exactly one to misspell "Nixon").

But say you aren't sold. You say to yourself, "you know, I really want to watch a fake sitcom about four aging harpies acting like immature children in a cess pool of a city, but I'm just not ready to hand over a sweaty ball of yuan to a skeevy street vendor who is also selling teriyaki racoon-on-a-stick on a card table to do so." Well, maybe the show description on the back of the box will do it for you (types as is):


The fabulous foursome are back and rating to embark on more adventures of the romantic kind, However, with a new member thrown into the mix namely Miranda's baby boy Brady, life has some major changes in store for them. For Miranda it's all about breastfeeding and losing her baby fat:newly-divorved Charlotte takes a tip from Samantha's sex-book and starts enjoying sex:samantha ditches her boyfriend and gets up to her usual sexpoits then even more shockingly offers to babysit Brady. and Carrie?

After a spate of dire dates she turns her attentions to her beloved new workand towriting a book which, after a fabulously glamorous book launch, turns out to be a mas sive success life amy have its ups and downs but there;s never a dull when you're Part of a dull moment when you're part of the ultiomate glossy posse.


Now, I have no idea if this is even close to an overall (real) summary of the entire series of Sex and the City, but what I do know is that I definately want to watch right now. I am all about seeing these four go on an adventure of the romantic kind! I really want to see what sort of babysitting and breastfeeding hijinks these ladies are in for! I am not sure if they meant to say "sexploits" or "sexpots" so I assume they made up a new word to cover both. Either way I'm in!

Although, really, I can't fault the translator for trying. (I gotta give them props for even attempting "sexploits.") Personally, I will until the end of time call this Sex In The City and I have had to correct this approximately one hundred times while writing this.

The biggest disappointment of the entire thing was that when we popped the first DVD in, it turns out that it's all still in English. I would have paid good money to watch a Chinese-dubbed version with mangled English subtitles of this entire series. In fact, I'm pretty sure that is the only way I would watch all seven seasons of this show.


*I totally tried to look this up to verify if it was actually Chinese or not so I wouldn't be culturally ignorant or reach American-level insensitivity, but it was difficult because I couldn't find the squiggly line on my keyboard to search for it. However, I did find the below picture (credit goes to the New York Observer) which appears to be Beijing's crossover between Sex And The City and The Sopranos:

**I AM IMPLYING THAT SARAH JESSICA PARKER IS A HORSE AND ALSO IMPLYING THAT THE CHINESE EAT HORSES IN CASE YOU COULDN'T PUZZLE THAT ONE OUT
Posted by Crank Crank Revolution at 11:52 AM