I've known about this site for a while, but I decided to go ahead and share it with people now. I think it's...time It's a convenient little web site that provides details for several popular logical fallacies that many people commit: 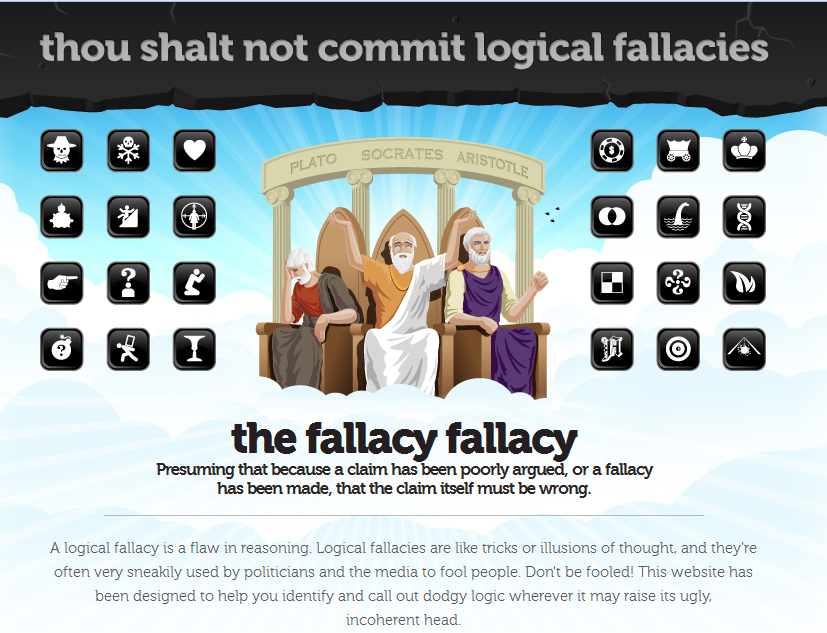 Thou Shalt Not Commit Logical Fallacies

Social media (and--let's face it--the internet in general) doesn't do a real good job with logic. People in general really aren't good with logic, to be honest. It's not necessarily a fault of our education system or our society; it's just that so much is counter-intuitive and contradicts what we see in our everyday lives that it's often difficult to wrap your head around.

But when it comes to, say, arguing about volatile issues on Facebook or Twitter, things can get...complicated. It's difficult to sound out a logical claim in 140 characters or less, so "debates" on social media tend to be complete messes, reduced down to the bare minimum and sexed up for dramatic effect. Generally speaking, if the entirety of your debate can fit on a bumper sticker (or a tweet, for that matter), chances are you're wrong about something.

And I've been guilty of this, as well. You'll notice that I don't really write too much about actual opinions anymore (aside from the scorched-earth defense I make for capitalism now and then). There's a reason for that--people don't care. There have been a few recent social media firestorms that have erupted over the past few months that basically forced me to stay away. I'm not wading into *that* particularly blood-filled pool, but suffice it to say several recent trending (and highly emotionally charged) hashtags were filled with so much faulty logic and bad statistics that it was like walking into a war zone with no armor and a bulleye. Which sucks, because there's a lot of legitimate discussion that gets drowned out by sensationalistic bullshit.

Anyway, I highly recommend perusing the link above. While it doesn't cover everything, it at least gives decent examples. At the very least, it's hopefully eye-opening for a lot of people to re-examine their thought processes. The highlights that I often see are:

As a reminder, just because something falls under one of these logical fallacies doesn't necessarily mean that the end result is wrong...but in order to be useful, it has to not fall under these problems. If you're trying to dissect the reasons why something happens, or what can be done to solve it, you need a valid, working plan as to how to get to that end point, and avoiding logical fallacies is a requirement.