The Nero Wolfe Project: Fer-de-Lance through Too Many Cooks 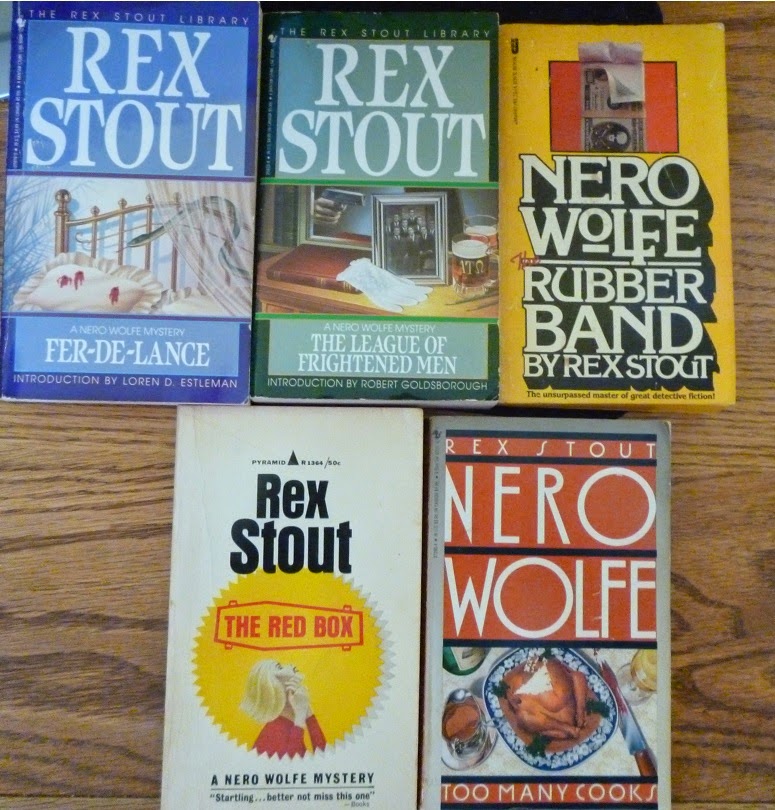 In this installment, we're looking at the first five novels written by Rex Stout: Fer-de-Lance, The League of Frightened Men, The Rubber Band, The Red Box, and Too Many Cooks.

Fer-de-Lance: The first novel featuring Nero Wolfe, so it's got pretty much all of the establishing character moments that one expects. Archie is introduced as the wise-cracking sidekick, the gang of extra detectives is introduced (Saul Panzer, Orrie Cather, and notably Fred Durkin) although none are really fleshed out yet. Inspector Cramer makes an appearance (smoking a pipe, no less!) And, of course, Nero Wolfe himself, as Stout seamlessly integrates his "eccentricities" into the story itself. (Notable in that Wolfe lampshades his quirks, all but saying that they exist purely to build his reputation as an eccentric genius.)

As far as the mystery itself is concerned, it's a little on the clumsy side (there's a few too many leaps of logic) but it does establish Wolfe as using the usual tactics to solve the case: notably, faking an event to "scare" a suspect (or, in this case, an unwilling witness) into providing key information. Bascially, a friend of Durkin's comes up missing after coming into money, and the suspicious death of a highly regarded university president. Wolfe quickly finds out that the president, despite his stature, was not the target, but rather one of the businessmen in the foursome. By using some pressure (and a fake mugging to get a witness to talk), Wolfe is able to force the murderer's hand and collect his fee.

The League of Frightened Men: This novel is unique in that it used to be difficult to find; in each of the reprinting runs, this is the novel that was most often overlooked, and so there are very few reprinted editions circulating. In this novel, a group of college men, one of whom was tragically permanently injured in a prank, come to Wolfe because several of their members are being killed off. Most suspect the injured party (who comes across as a sociopath, including laying claim to previous murders to drum up publicity for his novels and writing scary poetry to toy with them), but Wolfe casts doubt on his culpability.

Compared to the first novel, the personalities are smoother and more distinct, and confirms that despite the sedimentary nature of Wolfe he can easily mix some action in with the mystery. While the end reveal is a little disappointing (most of the novel is spent ruling out people rather than finding evidence for someone, and it all seems a little rushed) the road getting there is pretty fun.

The Rubber Band: Two clients are booked for an afternoon. One client is the boss of someone who is unjustly accused of theft, a case Wolfe is not keen on taking; a second group of clients that day gets complicated as one of them is murdered. It turns out the two cases are intertwined. A gang of men from the old west were once promised a hefty reward for (effectively) helping one escape from jail; the original gang (and their descendants) are trying to press the claim, now worth millions. Tracking down the escaped convict, the leader of the gang, and clearing the name of the original client becomes a priority, and it's clear that one person has turned on the others in the gang.

While the previous novels had some amusing moments, The Rubber Band managed to integrate humor into the storyline wonderfully. At one point, Wolfe is trying to hide his client from the police, and the police raid his brownstone, including the orchid rooms. He ends up hiding her underneath a row of potted plants, which he causally waters down as the police search high and low for her. Later, given Wolfe's dislike of women, Archie finds it amusing how he's taken to the client:


"I don't believe it. He always hated women until he saw how nicely they packed in osmundine."

It's also amazing how testy Wolfe can get when he can't crack a case and is being "hounded" by the people not cracking the case:


Archie: ...He says that the publisher of the Gazette told the Secretary of State to go to hell over long distance. He wants to know if we've seen the morning papers.
Wolfe (later): I am sacrificing my hours of pleasure in an effort to straighten out the only tangle that remains in this knot, and you harass me with these futilities. Did the Secretary of State go to hell? If so, tell the others to join him there.

Of course, the entire book starts off with the most ridiculous setup ever: Wolfe, in a valiant effort to get in shape, has taken up exercise in the form of...darts. Which he insists on called "javelins." Wolfe's complete seriousness in that this is a great idea, and Archie's frequent reactions to this clear absurdity throughout the book, form a solid balance of humor, character building, and good old fashioned mystery-solving.

And, finally, there's the three-fold meaning of the title: the rubber band refers to the packet of money (as emphasized on the cover illustration); the name of the gang in the Old West ("The Rubber Band") and it plays a pivotal role in the final clue to solve the mystery.

The Red Box: After a young model is poisoned by a piece of candy, Wolfe takes the extremely rare step of actually visiting the crime scene--prompted by a letter from the orchid grower's association. After catching one of the other girls present at the time of the poisoning in a lie, the client tries to have Wolfe back off, never suspecting to get the girl in trouble. When Wolfe refuses (and will sue for the money--he left his apartment, after all) and more investigation proceeds, it is apparent that the original girl wasn't the intended victim. The uncle of the girl visits the office to give him additional information, but is poisoned in Wolfe's own office--right at the moment that the uncle declares that a leather "red box" would answer who murdered the girl. Of course, he dies before the location of the box can be found, and it is a race between Wolfe, the police, and several other interested parties to find the box. In the end Wolfe is able to solve the mystery sans box.

While this is another solid mystery, it bears a lot of similarities to the previous stories; there's a case of mistaken identity; long-lost relatives suddenly appearing; Wolfe faking evidence to prompt a confession; and so on. While it's not bad, once could note at the time of publication that Stout should come up with some more tricks in his bag or the longevity of the series may be in doubt.

Similar to the previous book, the title has two meanings: the "red box" of candy, and the leather red box left to Wolfe with the evidence.

Too Many Cooks:Wolfe has been invited as a guest of honor with a gathering of some of the world's finest cooks, meeting at a resort in West Virginia. Poor Wolfe starts the book riding uncomfortably in a train, and begins his adventure talking to some old friends (and unsuccessfully trying to pry a sausage recipe out of one of them). It is, of course, established that there is a lot of bad blood amongst many of the world's most egotistical chefs, including stolen wives, stolen recipes, and drama fit for a three-year-old. During a taste testing contest, one of their members is found dead. After one of his dear friend is arrested for the murder (an arrest unwittingly prompted by Wolfe himself) Wolfe must then solve the murder before the return trip in less than a day or be held against his will (and away from the brownstone).

This is the book where Stout really hits his stride. The characters have all been established, and so we, as readers, are familiar with the setup. The mystery itself is pretty solid. Archie's banter with everyone--the girl he's hitting on at the beginning of the book, the clients that insists on seeing Wolfe, and with the irritable Wolfe himself--are natural, humorous, and are clearly effective.


"Of course, Wolfe's declaration that he wouldn't try any tricks because he didn't know any, was the same as a giraffe saying it couldn't reach up for a bite on account of its short neck."


This novel is also an efficient use of characterization, and presents a completely plausible artificial constraint. The entire situation shows Wolfe completely out of his element--none of the novel takes place in his beloved brownstone--and yet completely comfortable in his element--solving a murder and talking about food. Wolfe's interest is only piqued when he realizes that 1) he can use this to get a beloved recipe from his old friend, who otherwise refuses to give it up, and 2) solving the mystery is the only way he will get home anytime soon. It's an exciting, relatively realistic situation compressed into a short time frame and made better by the dialogue and writing.
Posted by Crank Crank Revolution at 9:00 AM