The Nero Wolfe Project: Prisoner's Base to Before Midnight

This is the fifth installment of the Nero Wolfe Project, as I review each of the books in the series as they were published. 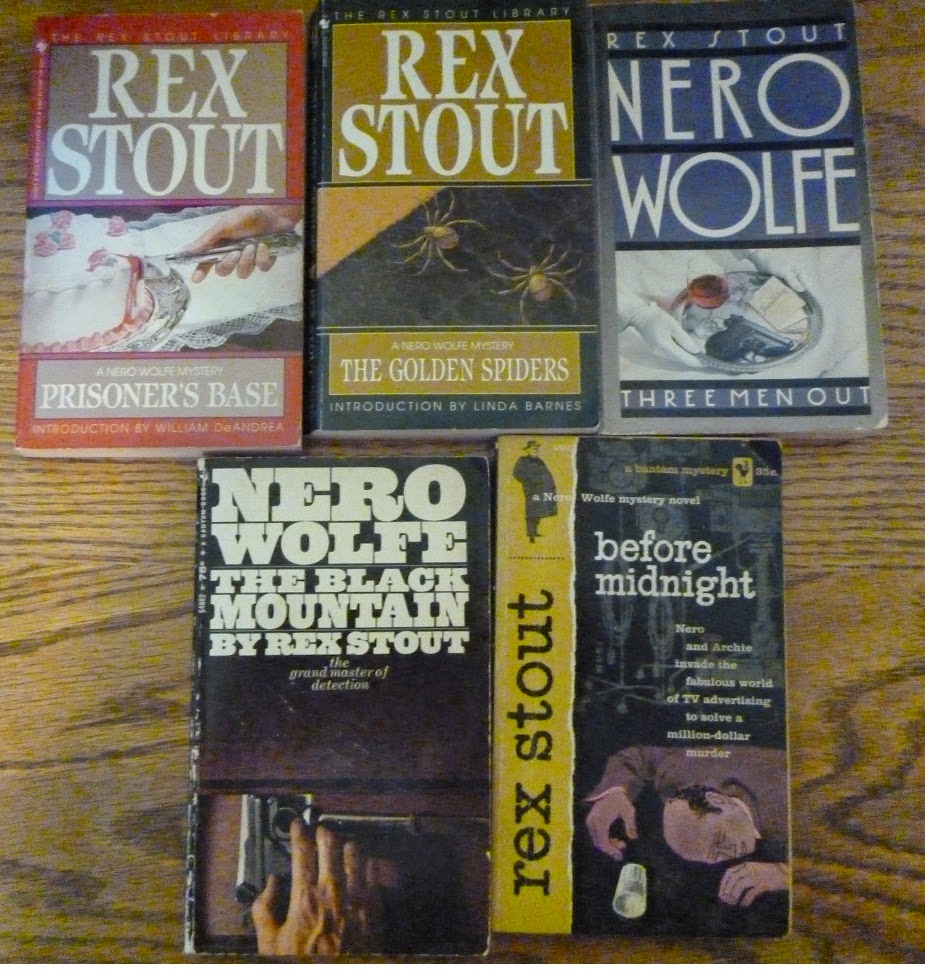 In this post, we're going to look at Prisoner's Base, The Golden Spiders, Three Men Out, The Black Mountain, and Before Midnight.

Prisoner's Base: When a young woman offers Archie money to stay at the brownstone for a week, but refuses to give a name or reason, he shows her to a room but advises it's contingent on Wolfe's approval. In the meantime, someone else comes to hire Wolfe to find someone--and that someone is the person they have upstairs. Wolfe, disinclined to take either job out of principal, offers the woman the room for the same amount of the fee he'd lose to the other person; she declines, whereupon Wolfe advises he will take the other job and gives her a half-day's head start. When she ends up dead before the job can be taken, Wolfe dismisses the case since he can no longer earn a fee by either party. Archie, however, feels guiltily responsible, and takes up the case pro bono--which ends up meaning that he is Wolfe's client. As such starts a mystery involving control of a large company, mysterious secret weddings, and old rivalries.

Prisoner's Base is refreshingly complex--not too terribly complex, of course, but a nice change after the much more simplistic short stories. Again, going into the plot will give away too much, but it's a nice, detailed trip through some uncharted territory.

The Golden Spiders: When a child walks into Wolfe's office to report an incident--where a woman wearing earrings shaped like golden spiders told him to get a cop--he instead goes to Wolfe, whom he trusts more than the police. The next day, the kid winds up dead. He had sent his meager allowance to Wolfe to solve his murder, and to not be a jerk about it Archie takes out an ad, using the funds without committing to it. Thus starts a complicated mystery that ends up with two more dead bodies, the discovery of a horrifying blackmailing scheme, and a violent confrontation with all of Wolfe's regular detecting staff.

This story was the first one to be adapted in the A&E version of this show, and for good reason: it's got a lot of action, a lot of vibrant and decent clues, and it showcases nearly all of the regulars in prominent roles: Fritz, Orrie, Saul, Fred, Cramer, Stebbins, and Rowcliffe all get turns; even Lily Rowan gets a mention (although sadly doesn't appear). Only poor Theodore is missing, as usual. While I wouldn't call this the best novel, it's certainly a good way to introduce someone to the series.

Three Men Out includes three stories: Invitation to Murder, The Zero Clue, and This Won't Kill You.

In Invitation to Murder, Archie is hired by a wayward heir to find out if any of the household help has the eye of the rich invalid. The client wants to get in good graces before the rich man's impending death. Of course, the client soon ends up dead, and Archie tricks Wolfe into showing up to solve the murder. A mediocre story.

The Zero Clue is one of the few Nero Wolfe mysteries with an actual riddle--as in, pencils-arranged-in-a-pattern-on-the-dying-man's-desk riddle. A rival detective, whose shtick involves using statistics to solve problems, is found dead. After locating the cryptic clue, it's up to Wolfe to find out which of the statistician's clients killed him. The introduction of the riddle, while it ends up being a little ineffectual, makes this story stand out, and for the better.

In This Won't Kill You--a title, I'd like to add, that is insufficient for the story--involves a World Series game where several players are drugged (and thus unwittingly threw the game) and the star player killed. The highlight of this story is Wolfe actually going to a baseball game, and Stout milks it for all it's worth (to good effect). The mystery itself is pretty standard, but the writing and situation make it a good story.

The Black Mountain is a very unique Nero Wolfe novel. It's not actually a mystery at all, but more like an action thriller. When a few old friends of Wolfe's are murdered (I'll leave out who), Wolfe is sufficiently enraged enough to travel to Montenegro to solve the murder. Wolfe is still Wolfe, but the story ribbons out into Wolfe's personal history, a beautiful description of the area, a lot of flavorful international intrigue (Yugoslavia, at the time, was a battlefield between the communist Tito, the Soviet Union who opposed Tito, and the freedom fighters) and the usual eccentricities of Wolfe transplanted to his homeland make one of the best novels yet. In addition, the role reversal--because Archie doesn't know the language, Wolfe has to report to him instead of the other way around--shifts the dynamic enough to be interesting. While the resolution isn't particularly impressive, it also doesn't matter--the flow and content of the novel is more than able to stand on its own.

Before Midnight details the decidedly non-murderous task of identifying an element in a national million-dollar advertising contest. The contest--where riddles about historical figures are posted, and the contestants slowly winnow down until there are only about five left--is written, with great secrecy, by one individual, who keeps the answers in a safe deposit box. When the finalists are invited to New York, the writer (presumably jokingly) reveals that he has the answers with him--a clear violation of the spirit of the rules. When he turns up dead (and the papers missing), the advertising firm hires Wolfe to find out what happened to the papers.

It's an interesting story, mostly because even though the job is for the contest, not the murder, they clearly intersect--and Cramer and Wolfe have plenty of amicable discussions about it, since their interests cross but aren't the same. It's certainly a differently paced book, and adds enough variation to the formula to be different. It's also uncharacteristic in that Wolfe admits defeat almost entirely throughout the book, even to the point of simply lying down after an eventful meeting and just about giving up. So far, this is probably the closest we've seen Wolfe as admitting defeat, and it's simultaneously humanizing and sad.

This book also has the return of Bill gore, for all of about two lines, his first appearance in...probably 15 books or so. Johnny Keems gets a mention, too, but he never actually shows up.

At this point, the only criticism I have is the relationship between Cramer and Wolfe. For a while it seemed like both men had a decent relationship--Wolfe conceding that the police are better than him in 9 out of 10 cases, and Cramer understanding that Wolfe needs a lot of leeway to solve the murder. And yet at this point every single novel has Cramer and Wolfe butting heads. If this was done for comedic effect, or to grow the characters, I wouldn't mind so much, but it mostly involved them being unreasonable and both forgetting the history of their relationship every time. You see glimmers of recognition--in Before Midnight, when Wolfe is specifically not solving a murder, both men agree to help each other with only some minor friction later in the book--and yet one feels that it will all be forgotten soon. It's a small criticism, but it can get a little old.
Posted by Crank Crank Revolution at 10:00 AM