It's getting closer to Halloween, and that means a lot of cut-rate horror films are being watched by people everywhere. No one has facilitated this quite like Netflix has, where both high-concept major releases and low-budget dated garbage compete for the same eyeballs come All Hallow's Eve.

Somewhere in the middle is the comedy-horror film Detention, which was released in 2012. 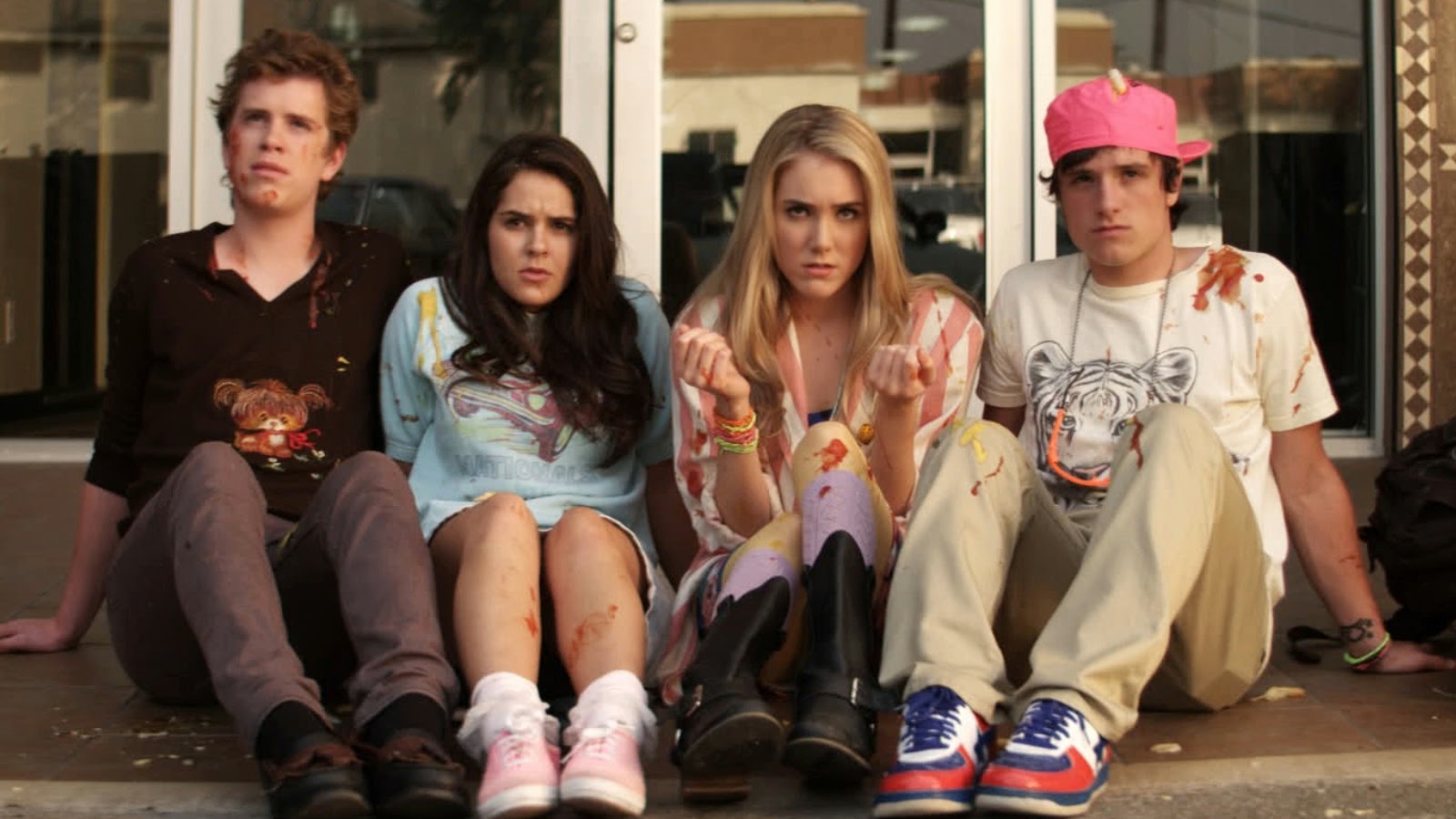 Starring Shanley Caswell (The Conjuring) and Josh Hutcherson (The Hunger Games), the plot involves...well, nominally, it's about a serial killer who is terrorizing the students of a high school in Grizzly Lake. The killer takes up the costume and persona of Cinderhella, an (in-universe) popular movie character. The two protagonists, Riley and Clapton, start off as bitter rivals (mostly over a love triangle involving Ione) but when Ione's ex Billy Nolan challenges Clapton to a fight over her, alliances shift. All the while, the killer is killing off popular kids one by one. The ever-suffering principal (played surprisingly effectively by Dane Cook) tries to control the situation, with varying degrees of success.

Well, hold up. Let's back up a bit, because one of the charms of Detention is the fact that the above, while it sounds like a trite teen slasher movie, actually has very little to do with the plot. The actual plot is that each of the characters is basically a star of their own horror movie. The angry jock? He's actually injected with fly DNA. The creepy loner in the detention hall? He's stuck in a time loop (see: Donnie Darko). Ione is actually acting out Freaky Friday with her mom. And so on.The thing is, none of these are the main plot. They're treated as sort of mini-episodes, no longer than a few minutes each, to explain why the characters act the way they do.

If it sounds confusing, that's because it is. Kind of. It all sort of makes sense in context, but not really.

Eventually, the plot resolves itself via a time machine, where Riley and Clapton have to go back to prevent a disgruntled student from blowing up the school and everyone in it, preventing the entire sequence of events from happening in the first place. (Just trust me on this.) The entire time this is playing out, it's toying with the very cliches that you're expecting. Ione and her mom are perfectly happy with their new bodies. The fly-jock acts like he's juiced up on steroids, but he's really just trying to channel the DNA. Weird things in the beginning of the movie make a lot more sense once they go back in time. And so on.

Here's the problem, though; while it's a refreshing chance of pace, the style and execution of it isn't optimal.

First things first: this movie was directed by Joseph Kahn, who got his start in music videos, and it shows. In some ways, the fast-paced, quick-shot format overlaid with poppy music covers works perfectly, but at other times it just gums up the works with unnecessary flash. The movie is also over-saturated with 80s and 90s pop culture references. It actually makes sense in context (Ione talks like it's 1992 because that's when she's from; of course we don't know it until much later in the film) but some things (like the Swayze vs Segal discussion) just seem like a sop to nostalgia porn fanatics. Some of it also feels lazy; given the time-travel nature of the film, there's a lot of weird plot holes that they just seem to handwave away with a new song and some catchy font effects. I'd also say there's too many characters. Some of them--Mimi and Mr. Kendall in particular--just seem to be there to fill some sort of cultural reference slot, but with such weak effort it never delivers.

As with most efforts like this, a lot of the negatives can be chalked up to "missed opportunities." The entire concept of "each character is in their own movie" is fantastic, but it doesn't quite get there with this script. It only applies to a handful of characters, and isn't always done properly. (What on earth was with the TV hand? Do bandages not exist in the 1990s?) It just tries too hard, and it shows.

And yet, there's something charming about the entire enterprise. It's certainly enjoyable (and a reasonably trim 93 minutes that seems half that) if you don't mind that it's not exactly the most airtight premise. It doesn't take long to realize it's just a breezy coast through a half-baked horror/sci-fi plot. To be blunt, it's a mess, but it somehow still feels satisfying.

I suspect the market for this movie is fairly narrow. Unless you have a fetish for 90's references, a lot of the dialogue in this movie is either going to be nonsensical or cringeworthy. And it seesaws between being a teen comedy, a satire, a straight-up horror flick, and a sci-fi movie without ever really settling on any of them. (The trailers make this out to be a horror film with some mild comedic moments, and that's far from what it is.) But if you hit that demographic, it's certainly worth watching.