I hadn't planned on watching the new television series, Selfie. But it happened. So I figured I'd do a review of the pilot, because why not? 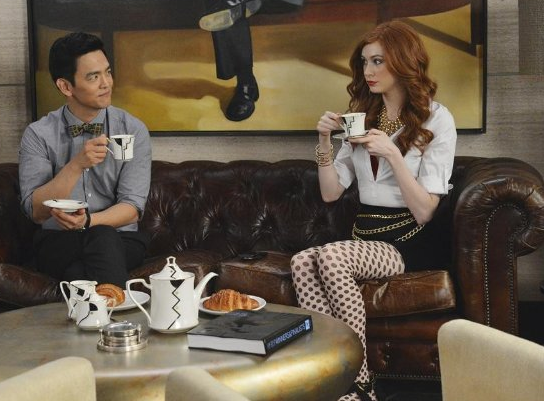 First things first: the only reason I even heard of this new TV show was because of two reasons: that horrifying title that had nearly everyone immediately dismiss it; and the fact that it stars Karen Gillan from Doctor Who. (If you don't know her from Doctor Who, you might from Guardians of the Galaxy or the well-received horror film Oculus.) American audiences might be more familiar with the other main star, John Cho, who was Harold from the Harold and Kumar series as well as about a hundred other things.

There are so many new shows each fall (or, increasingly, all year round) that it's difficult to pick out what to give a chance. I was going to give this show a pass because the premise didn't really interest me, and it felt like it was going to be one of those horrible, thrown-together projects trying to coast on the talent of the stars.

To be honest, the only reason I watched it in the first place was because I was setting the DVR to record Gracepoint (another show with Doctor Who connections, and is a retelling of the otherwise fantastic Broadchurch) and it just happened to be starting. It was a complete fluke; I had no intention of ever watching this. But I did.

Selfie wasn't the worst TV show I've ever seen. In fact, I'd go so far as to say it has potential. Sadly, it still has a lot of problems. But we'll get to that.

The premise isn't particularly original or notable: Gillan, playing an extreme exaggeration of a narcissistic millennial named Eliza, realizes she is shallow, unliked, and has no real friends--her entire life is online. She convinces Henry, one of the successful salespeople at her company, to "rebrand" her. (Shades of Pygmalion, and the obligatory My Fair Lady after mentioning Pygmalion.)


The pilot kickstarts Eliza's transformation. In the first few minutes, we establish that she's "famous" online and that her success is tied primarily to her sex appeal. She's then publicly humiliated--she finds out, while on a plane ride, the man she's involved with is married. (Other, grosser stuff happens as well.) An entire plane of her coworkers, sick of her nonsense, take great pleasure in disseminating the disaster that's unfolding before them.

This prompts her to talk with Henry to change her "marketing." Henry walks her through her life--she needs to stop spending so much time on her phone and more time taking an active interest in others. As a project, he tells her to accompany him on a date to a wedding, where she has to act professional, not be online, and dress modestly. Unaware of how to do so, she calls her book-club-having neighbor--in true sitcom fashion, they are polar opposites and dislike each other--to help her dress appropriately.

In the end, Harold and Eliza realize that they need each other--he's too stiff and formal, she's too shallow and vapid. Hilarity ensues.

Here are some of the things I liked:
Let's look at the things that didn't work so well:


Henry: You shouldn't feel compelled to make everything so sexual.
Eliza: And you shouldn't be so uptight.

Really? Maybe there wasn't a frying pan nearby they could have beat us over the head with so they had to go with that. There's actually a lot of dialogue like this. Some of it, perhaps, can be forgiven--this is the pilot, after all, and they have to cram a lot of information in a small amount of time. It just seems like it could be handled better.

On the face of it, it seems like there's more bad than good. But not really. A lot of the bad can be chalked up to this being the pilot; they had to establish the premise and introduce characters. Other shows do it more skillfully, but it's not the worst thing in the world for a pilot to seem...off.

Is the show worth watching? Honestly, I don't know. If they had a less talented cast, I'd just chalk this up to another forgettable sitcom that tried to pander to a specific demographic that wasn't me. But the abilities of both Gillan and Cho are amazing, and they carried this subpar script along to where I didn't want to stop watching. And yet one gets the feeling that the writers and creators are hung up on the "social media" gimmick, which is going to get real old real fast.

Will I continue to watch Selfie? I honestly don't know, but I doubt it. At the end of the show I didn't really care what happened to any of the characters. But I'm more than willing to watch again if I hear that things improve, and the good news is that while a lot of the writing was awkward and misfired too often, it did have a fairly decent foundation. So we shall see.
Posted by Crank Crank Revolution at 12:04 PM