The Nero Wolfe Project: Three Witnesses to And Four To Go

This is the sixth installment of the Nero Wolfe Project. 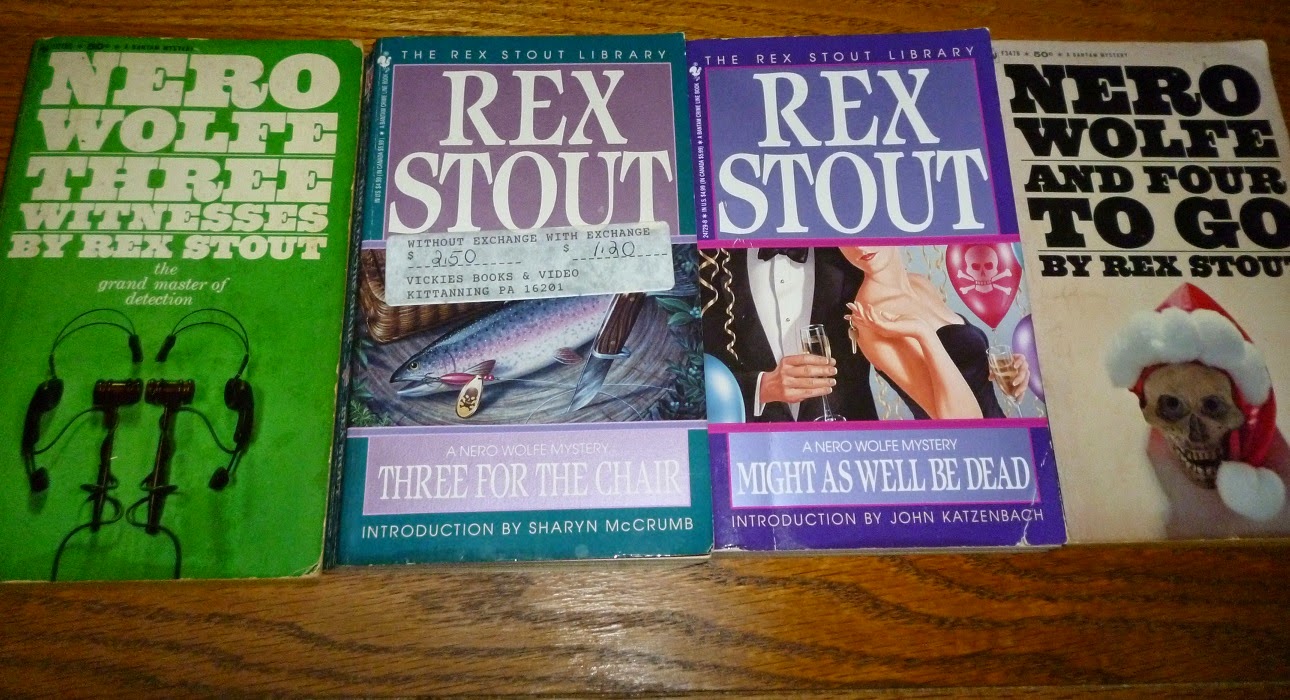 Today, we're looking at Three Witnesses, Might As Well Be Dead, Three For The Chair, If Death Ever Slept, and And Four To Go.

Sorry for the delay for this installment. I actually lost one of these books while reading it (it was hiding under some blankets); plus, I have one of the books (If Death Ever Slept) only in a compendium, which is huge (and why it's not shown above). So I didn't have as many opportunities to read as I would have liked.

Three Witnesses includes three short stories: The Next Witness, When A Man Murders..., and Die Like A Dog.

In The Next Witness, Wolfe is compelled to tesitfy in court about a case he turned down, and so the story begins with Wolfe sitting (uncomfortably, as always) in a courtroom awaiting his turn on the stand. During the testimony, he realizes that the accused is probably innocent--plus a woman wearing hideous perfume is next to him. Both factors compel him to leave and investigate; since both he and Archie are under subpoena, this means risking arrest. While Wolfe travels everywhere except his beloved brownstone, he slowly pieces together the clues to the crime and, once he arrives in the courthouse the next day (under duress of arrest), he provides testimony to free the accused and point the finger at the rightful murderer.

A standard mystery is made exceptional given the circumstances; any story with Wolfe out of his element is almost always worth it, and this is no exception.

When A Man Murders involves a presumed widow whose husband was killed in the Korean War--only to turn up alive and well after she remarried. When the widow hires Wolfe to negotiate a divorce, the former husband is found dead, and the new husband charged with the murder. Of course, additional motives are injected once the will is sussed out, and Saul has to comb the east coast for a witness. A decent, if ultimately forgettable, story.

Die Like A Dog has a dog! When a client shows up to hire Wolfe, and Wolfe turns him down, he leaves in a huff and takes the wrong coat. Archie then walks to take the coat back, only to find the prospect murdered. At the scene, however, a black lab is found and follows Archie home. Archie, thinking this is a good way to needle Wolfe some, bring in the dog--only to find that Wolfe likes dogs. Wolfe then takes on the case after it is revealed that the dog may be a crucial piece of evidence.

This is one of the best short stories I've read so far--and not because it has a dog. (Well, not only because.) The mystery is an actual, find-a-physical-clue variety, which is always fun; the characters all play their parts wonderfully, and the entire concept of Wolfe accepting the dog almost immediately is not only funny but a little touching.

Might As Well Be Dead involves a father from Nebraska looking for his son. They had a falling out over what ended up being a wrongful accusation, and the parent wants to make amends, but can't find where his son is. As it turns out, his son (now living under an assumed name) just got convicted of murder, complicated by the fact that opening up information to clear him would identify him (among other embarrassments). Wolfe, looking for a way to increase his fee, works to clear the son's name of a murder charge while keeping him in the dark.

It's one of the few Wolfe stories with a shocking event--I won't go into it--but it directly affects the Wolfe mythos, much like Black Mountain did, although with much, much less impact. (It involves a recurring but minor character). A solid book.

Three For The Chair includes A Window For Death, Immune To Murder, and Too Many Detectives.

In A Window For Death, the death of a wealthy industrialist is ruled pneumonia in circumstances similar to his father's death. Since two doctors certified it as pneumonia, there's no reason for cops to be involved, but due to the situation (his estate is worth a significant amount, and there was bad blood between the business partner and the family) they all agree to go to Wolfe to see if there's enough evidence to present to the police. A good, solid mystery involving red herrings and actual evidence, it's one of the better short stories.

In Immune To Murder, another story that takes Wolfe out of his element, he goes to Washington as a favor to an ambassador. The ambassador requests Wolfe to prepare freshly-caught trout for him (along with a group of guests who--surprise!--hate each other), and Wolfe agrees...only to find that the Assistant Secretary has been killed while fishing. An interesting tale, and one of the better Wolfe-away-from-home ones.

In Too Many Detectives, Wolfe is called to Albany. New York State is doing a review of wiretapping laws, and is calling on all licensed private detectives to give testimony about any wiretaps they have done. Wolfe and Archie share the waiting room with about five other detectives, where they size each other up (and introduces Dol Bonner, one of Rex Stout's other detective series, into the world of Wolfe and Archie). Wolfe goes in first, and the testimony centers around a bungled wiretap job he had done a few months prior, only to be told that the subject is there with them that day--but when he's called to the office, he's found strangled. Wolfe and Archie are both then arrested as material witnesses. Outraged, Wolfe called all the other detectives called in that day and they arrange a meeting to try and determine who killed the victim--only to find that each and every one of them had had bad dealings with the victim at some point.

This collection of short stories is also really, really good; it's a nice balance between the using-logic-and-evidence school of mystery writing, as well as Wolfe's standard psychological games. I previously stated that I didn't care for the short story collections, but I'm finding that Stout really improved his abilities.

In If Death Ever Slept, Archie takes on the role of the secretary of a very rich man who wants to get some dirt on his daughter-in-law; he is convinced she is passing on vital business secrets to another party and has already cost him a million dollar deal. Archie takes on an assumed name and tries to get in everyone's confidence, but of course a gun is stolen and soon the former secretary is dead. Cue a bit of a farce as Archie tries to remain secretary without dealing directly with the police, who would blow his cover, and Wolfe internally debating whether to tell the police what they've found out before he gets his fee.

It's actually not a bad mystery, but I don't care for this one since the premise (Archie and Wolfe are on each others' nerves and so Archie goes undercover) was already used in another story, Too Many Women. While the story quickly diverges from that premise, it still seems recycled.

And Four To Go is the only Wolfe collection to have four, instead of three, stories. In addition, three of the four are holiday-based, another first. Most of them are significantly shorter than normal, even for novellas.

In Christmas Party, Wolfe demands Archie take him to meet a famous horticulturalist, but Archie had already made arrangements (a date, of course) and cleared it with Wolfe beforehand. And to get on his nerves, he produces a filled-out marriage license as to why it's so important. The date is to a company Christmas Party where, of course, the head of the business is poisoned. A man in a Santa Claus suit--whom no one recognized--leaves immediately upon the murder, and it's up to Wolfe to solve the mystery lest a major secret gets let out.

This is a fun story; there's not much time to get much of a mystery moving, but it's a great read. I can't say too much without spoiling the major reveal, so we'll just leave it at that.

Easter Parade involves Wolfe engaging in a little petty larceny. A prominent citizen who also deals with orchids has created a hybrid that Wolfe has been trying to perfect for years, and has Archie hire someone to steal it from the lapel of the citizen's wife at the Easter parade. Of course, once the hired hand reaches the wife she dies, and Wolfe has to find out why to deflect suspicion of off why a random person would steal a flower from her the moment she died.

Again, this one is a fun read--here's Wolfe, at his basest level and gets in the maximum amount of trouble for it, and he has to pay for his pride and vanity.

In Fourth of July Picnic, Wolfe is invited to speak at a union worker's picnic, only to have one of the speakers die before going on. Unfortunately, circumstances and evidence mean that someone who was on the speaker's list was the murderer, and to avoid being held as a witness Wolfe has to solve the mystery before being compelled to notify the police (and thus be under suspicion).

I wasn't as impressed with this story; it's not very interesting, which is a shame since a lot of usually the episodes where Wolfe is out of his element are the best. In addition, the trick at the end that reveals the murderer is the same trick he's pulled dozens of times before, except without anything interesting to add to it.

Murder Is No Joke has a nice premise but is otherwise forgettable. A woman comes to Wolfe to try and get rid of a suspected blackmailer at the company she works for; when Wolfe calls the suspect to arrange for her to come, she is presumably killed while on the phone. Wolfe, upset that he was made a fool of, brings the suspects in to solve the murder. Eh.
Posted by Crank Crank Revolution at 9:00 AM