While finding new and odd flavors of candy aren't all that uncommon anymore, finding strange drinks is a little more...interesting. Below, I'm going to review three drink flavors that are out of the ordinary: Coconut Wave, Moxie, and (wait for it) Chocolate-Covered Maple Smoked Bacon. 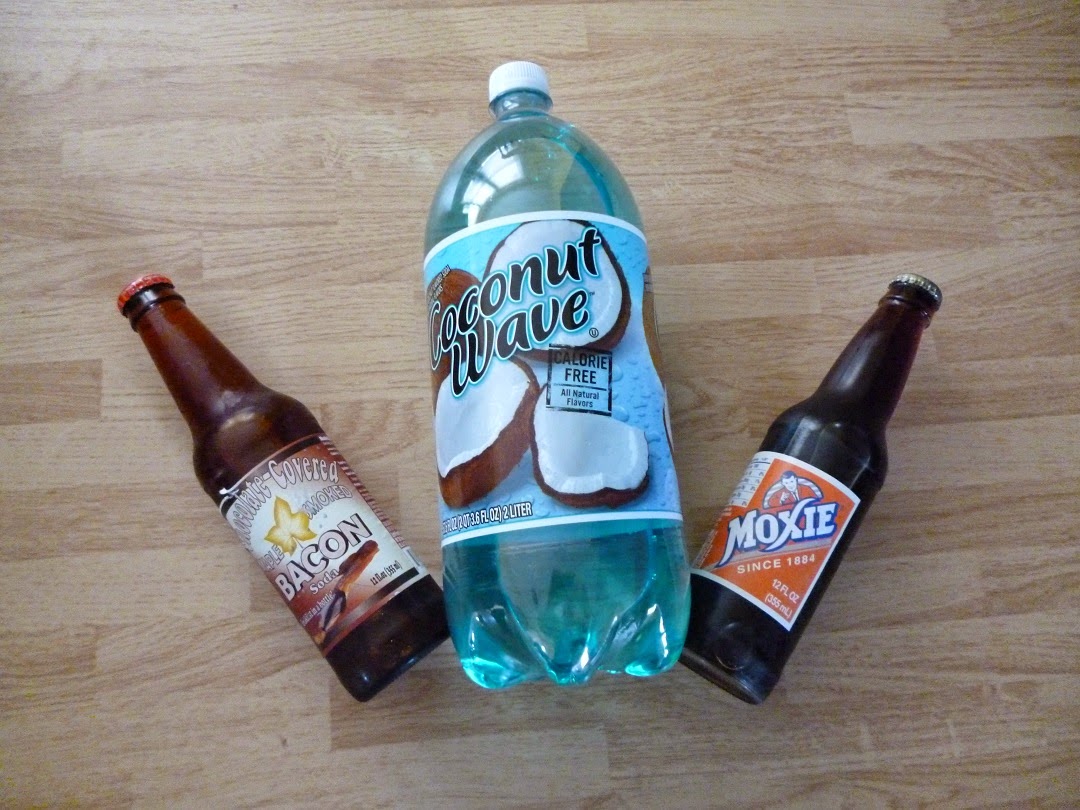 Moxie: Moxie is a famously old-fashioned drink associated primarily with New England and Maine in particular. The name--Moxie--is now a legitimate word that means determination and spirit. While it's not sold much anymore outside of the northeast United States, you still see it pop out now and then in popular culture. Anyway, I'd never tried the drink, and since it is a distant cousin to sarsaparilla, I figured it was worth giving it a try.

Perhaps things are best left as theory. Moxie taste like--well, there's no better way to put it. It tastes like carbonated cough syrup. Oddly, it's actually not that bad: it's not very sweet (despite sugar being a main ingredient) and it's very light. I can easily see why people get addicted to it; I know enough people that have a love-hate relationship with the taste of OTC medicine. It is not, however, what I would consider the taste of determination to be. If I could find a diet version, I could see this being an occasional indulgence.

Chocolate-Covered Maple Smoked Bacon: This one deserves a close-up: 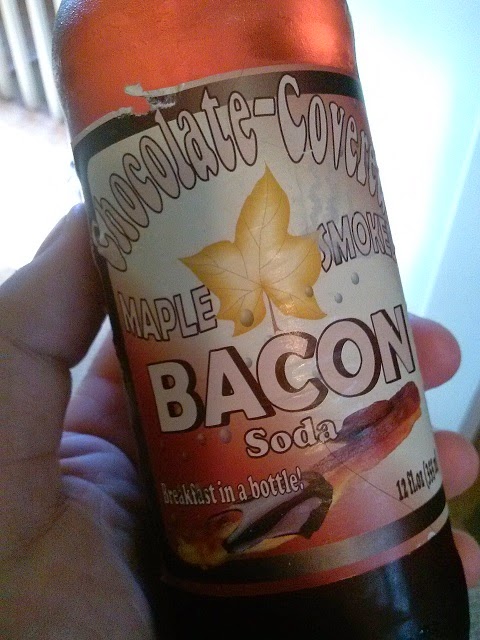 "Breakfast In A Bottle" indeed. I've had chocolate-flavored pop before (verdict: Just go eat some chocolate instead) but I've never had bacon-flavored. I've had bad luck with bacon-flavored things lately; most of it just tastes like the fake smoke you put in toy train sets. (Not that I'd know, of course.) Of course, adding maple into the mix is a game changer, although I'm not sure what game it's changing to.

First thoughts: it smells delicious. But that's mostly because all you smell is chocolate. And it tastes...not bad, but mostly because all you taste is chocolate. You can clearly tell that there's maple in it once the aftertaste kicks in, but I barely noticed a hint of bacon. Once I took a few swigs (more than sips, less than gulps--you have to pace yourself with this sort of thing unless you want it to end up on the floor) I could taste all three things--bacon, chocolate, and maple--and it wasn't altogether bad. Not great, mind you--I couldn't drink more than a fifth of it before I said quietly to myself, "OK, that's enough," but if you want to win any bets with your friends you could do a lot worse. Even so, it's worth buying and trying just to say you did it.

Coconut Wave: While I was able to find the other two items in a small, disposable bottle form, I wasn't able to find a third item to fit the theme. However, Wal-Mart, of all places, provided me with a good choice: coconut-flavored soda.

At first, I thought it was weird, but, really, how is it all that much different than, say, a lemon-lime drink? And that's sort of what I expected with this--a light drink that tasted sort of like coconut, much like Sprite kind of tastes something sort of like lemon-lime.

However, I couldn't get behind this drink. It actually tastes exactly like Sprite, except the aftertaste, which tastes like artificial coconut. This isn't really a drink I'm interested in--even if it was in diet form, where the artificiality of it might not be so bad, I don't think the novelty of it would stick after a few sips.

Final Verdict: If you are going to sit down and drink a coconut, chocolate-covered maple bacon, and cough syrup cocktail in one sitting, be fully prepared for some burps that are nothing short of Lovecraftian.
Posted by Crank Crank Revolution at 9:00 AM